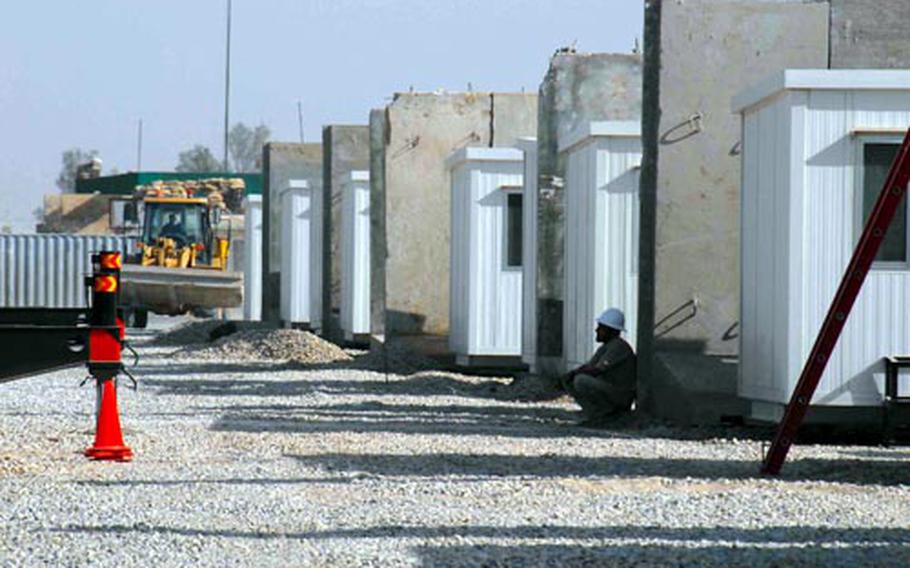 A worker at Forward Operating Base Delta rests in the shade of a row of new Contained Housing Units, or one-room trailers, as another worker moves one of the concrete barrier walls that will protect this "CHU city" from explosives. (Ashley Rowland / S&S)

A worker at Forward Operating Base Delta rests in the shade of a row of new Contained Housing Units, or one-room trailers, as another worker moves one of the concrete barrier walls that will protect this "CHU city" from explosives. (Ashley Rowland / S&S) 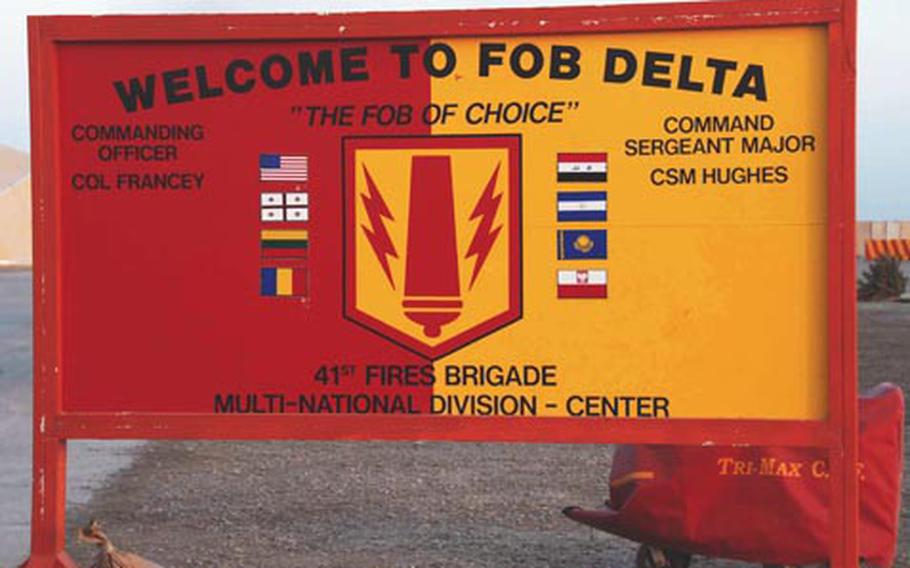 Forward Operating Base Delta, known as the "FOB of Choice," was home to just 200 U.S. troops last spring, but has about 2,000 today. Officials say the base&#39;s U.S. population will shrink to several hundred when the 41st Fires Brigade leaves later this year. More Iraqi troops will be stationed at Delta this spring. (Ashley Rowland / S&S)

KUT, Iraq &#8212; At a time when most American military bases across Iraq are shrinking or reverting to Iraqi control, Forward Operating Base Delta is in the midst of a major growth spurt.

Rows of one-room trailers spring up almost overnight on vacant gravel lots, and by mid-February they will replace most of the base&#8217;s tent housing. A new theater is scheduled to open in mid-February, and construction is under way on a second dining facility worth $30 million.

Since last May, the U.S. military has pumped $70 million into construction on a base that once had a perimeter so porous that Iraqi farmers and their goats had to be chased off the grounds. But the biggest change is the number of Americans at this former Iraqi air force base.

Because of its long runways and strategic location &#8212; on the banks of the Tigris River, and not far from Iran &#8212; Delta was selected several years ago to become an "enduring" base, one of a handful in Iraq that would remain open as other U.S. bases were closing. At one point last year, Delta was even scheduled to house 8,500 soldiers by this summer, Pierce said.

But those plans have changed. Even as Delta expands, U.S. officials are preparing to dramatically shrink their presence there. When the 1,200-strong 41st Fires Brigade leaves Delta this summer, it could be backfilled by a much smaller force of just 300 to 600 U.S. troops, Pierce said.

Delta&#8217;s uncertain future mirrors that of other U.S. bases across Iraq as U.S. troops prepare to leave Iraq&#8217;s urban areas by this summer and the country itself by the end of 2011. Combined with a new president who has pledged to pull all U.S. troops out of the country within 16 months, and the number of soldiers and bases that will remain open long-term is in limbo.

"A lot of things are changing and in a state of flux," said Lt. Col. Edward Hogan, of the Facilities Engineering Team. "Even at the higher levels, there&#8217;s probably not a lot of understanding of what the future looks like."

Big changesJust a year ago, Delta was a true international zone, with troops from Poland, Lithuania, Georgia, El Salvador, Kazakhstan and Romania working alongside a small contingent of Americans. The base&#8217;s tiny post exchange was essentially a closet, restocked every few weeks when two helicopters made a trip to a post exchange in Tallil.

Now, only the Romanians remain, along 92 Iraqi airmen and the expanded U.S. force. But 300 to 600 Iraqi soldiers will be stationed in March at Delta, which is home to an Iraqi police academy. The southern half of the base will eventually revert to Iraqi control.

Col. Richard Francey, 41st Fires Brigade commander, said he envisions fewer Americans and more Iraqis operating at the base, and that&#8217;s the way it should be.

Delta was selected in 2005, along with five other bases, to become an "enduring" FOB that would remain open after others had closed. Now officials call it a "warming" FOB &#8212; one that, like a pot of water kept warm on a stove, will keep a small U.S. presence in the area that can respond quickly to problems in the region.

Delta is outside but near Kut, a city of almost half a million people and a possible labor pool for the base. The base has large open spaces and is relatively undeveloped, meaning the United States could start building there from the ground up. The two runways are long enough to land all U.S. aircraft except the C-5, although upgrades are being made that will allow even that plane to land.

Delta is also near the shores of the Tigris River. With its water treatment facility, Delta can siphon water from the river and be virtually self-sufficient. That means the base doesn&#8217;t have to worry about the expense or security concerns of trucking in water, a significant issue at some landlocked bases.

"It&#8217;s essentially an unlimited water source," Hogan said. "Right now, they&#8217;re making more water than this base uses, and they have the capacity to make a lot more."

Life at DeltaWhen 1st Sgt. James Childers learned last winter that he was being deployed to Delta, he went online to find pictures of the base. The few he found didn&#8217;t impress him.

"It was the FOB that time forgot," he said. But this has been the best of his four tours in Iraq, he said, and he prefers Delta to larger bases like Baghdad&#8217;s Camp Victory, where he was once stationed.

Staff Sgt. Erica Foster said life has improved at Delta since she arrived in June because of better services and new stores: Faster mail delivery, a barber shop, a larger PX, an Internet store, a pavilion where troops can relax, and a coffee shop.

"I know to some people, buying coffee is just buying coffee. But as a soldier in Iraq, it&#8217;s a taste of home," she said.

Still, coffee shop or not, she prefers the anonymity of a larger base to Delta&#8217;s small town atmosphere.

Base located in Wasit, one of Iraq&#8217;s calmest provinces

&#13;forward operating base delta is in the middle of wasit province, a poor &#13;wheat- and date-growing region in the breadbasket of iraq and a stronghold for &#13;radical shiite cleric muqtada al-sadr.

&#13;today, the province is relatively free of insurgent activity, although &#13;several bombs were planted near polling sites before the jan. 31 provincial &#13;elections.

&#13;another bomb aimed at a u.s. convoy in recent weeks exploded behind a passing &#13;military vehicle, hitting a civilian car behind it and killing a person inside.&#13;

&#13;the last u.s. servicemember killed in combat in the province died in december &#13;2007, and a u.s. contractor providing security for an engineering team died in &#13;june 2008. both were killed by roadside bombs.

&#13;but the province has been among the calmest places in iraq since a shiite &#13;uprising in march, when insurgents in the poorest neighborhoods in the capital &#13;city of kut attacked coalition forces.

&#13;col. richard francey, commander of the 41st fires brigade, said wasit &#13;residents are enjoying the recent security in the region and want to keep it &#13;that way.

&#13;"they like their freedoms. the people on the streets are going to protect &#13;their own freedoms," he said.