Foam in Thames, other waterways is traced to RAF Fairford 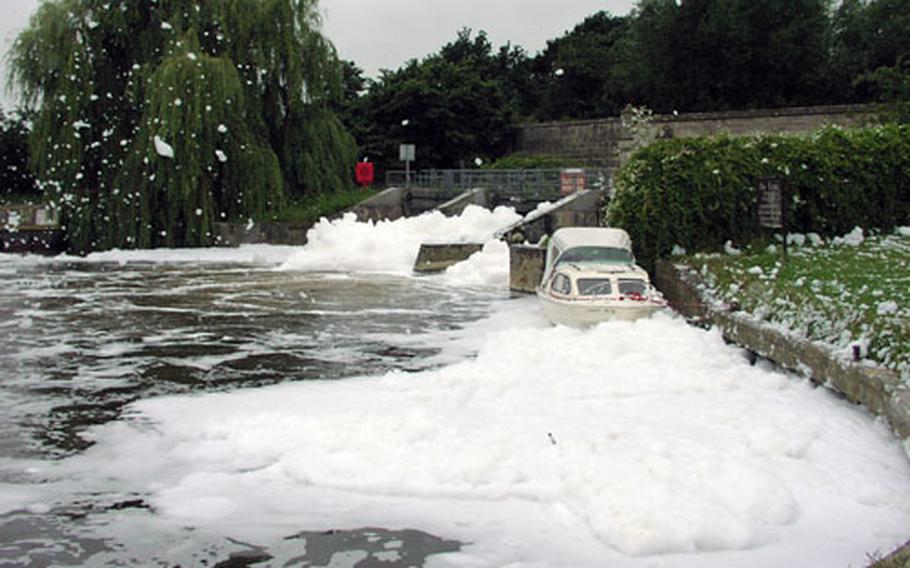 Agency officials said the foam had caused some people in the area to suffer sore throats and itchy eyes, and had killed hundreds of fish.

British media first reported on the spill&#8217;s effect Friday, but the Environment Agency last week would not divulge the cause of the spill.

The foam was first found in Dudgrove Brook near the town of Fairford. Hundreds of fish were dead as a result of the water becoming oxygen-deprived, according to agency officials.

Containment actions were taken to isolate any potential damage at the spill site, according to Air Force Tech Sgt. Keith Houin, a spokesman with the 501st Combat Support Wing, which oversees administrative and logistical functions at the Fairford base.

The foam was particularly visible at points in waterways where water collects and swirls, Dave Ferguson, an Environment Agency spokesman, said Tuesday.

On Friday, the EA warned in a press release that the foam could create health risks.

&#8220;We have received reports that people have suffered from sore throats and itchy eyes if they are near the foam,&#8221; the release states. &#8220;If members of the public experience these symptoms they should seek medical advice.&#8221;

While EA officials believe the spill came from the base, the party responsible is not yet known, Ferguson said, adding that an investigation into the spill has begun.

The foam is diluting as it moves through waterways, he said.

&#8220;It was difficult for us to clear up because there was no way of stopping it,&#8221; Ferguson said late Tuesday in an e-mail.

Houin said Tuesday in an e-mail that the Air Force is &#8220;committed to environmental stewardship&#8221; and determining the cause of, or remedy for, any environmental damage.

The foam reached heights of up to 6 feet in parts of Oxfordshire on Friday, according to British media reports.

It was not clear Tuesday how many people had been affected by the foam.

&#8220;Fisheries officers are also assessing the impact of the foam on local wildlife and we will continue to do so,&#8221; according to the Environment Agency&#8217;s news release. &#8220;We won&#8217;t know exact figures of fish killed until the site has been cleared up properly. However, it will be some time before we know the full environmental impact of the pollution.&#8221;

RAF Fairford is gearing up for the Royal International Air Tattoo this weekend. It is billed as the largest military air show.