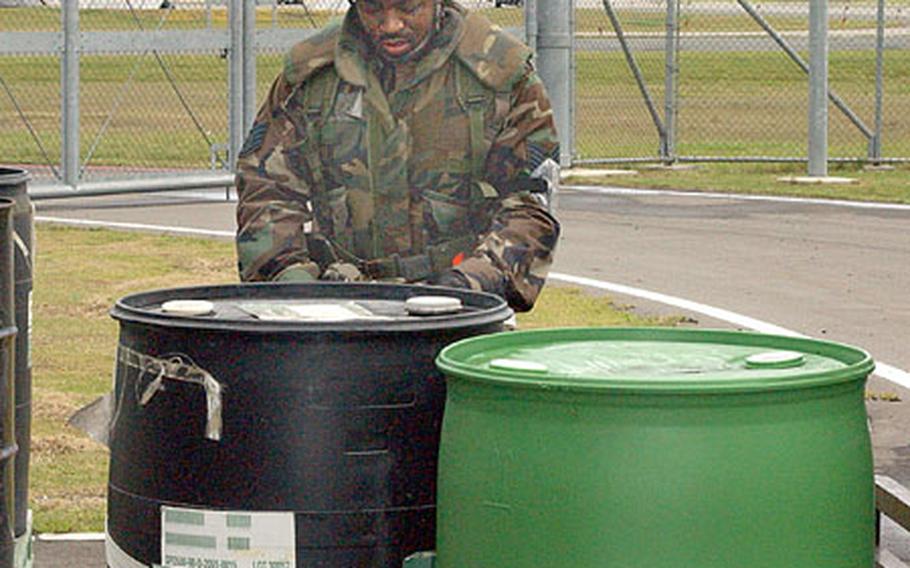 Staff Sgt. Chris Vincent, 35th Logistics Readiness Squadron, Misawa Air Base, Japan, secures barrels of Aqueous Film Forming Foam to be shipped to northern Japan for use in the event of an oil refinery fire. ()

An additional 1,000 gallons of the chemical is being shipped to Hokkaido from Yokota Air Base.

The largest supply is coming from Okinawa&#8217;s southernmost prefecture. The 18th Wing on Kadena Air Base, Okinawa, sent an additional 57,000 liters of foam, about 15,000 gallons, in five-gallon containers Friday. The containers were loaded onto Japanese aircraft in Naha Friday evening.

The foam will be used to coat oil leaking from four Idemitsu Kosan Co. tanks at Tomakomai since Sept. 26, when a 7.8 magnitude earthquake and several aftershocks rocked the island.

Immediately after the quake, two tanks erupted in flame and it took more than 40 hours to suppress the fire. Officials hope the foam will prevent another blaze.