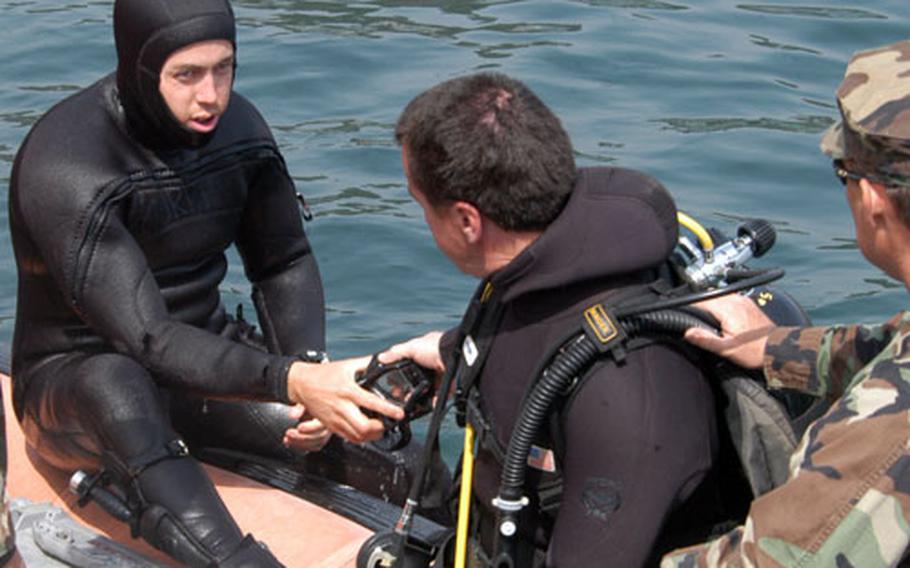 Chief Petty Officer Erin Telitz reaches to catch a mooring line as he prepares to cast off during a diving exercise near Chinhae Naval base on Wednesday. (Jimmy Norris / S&S) 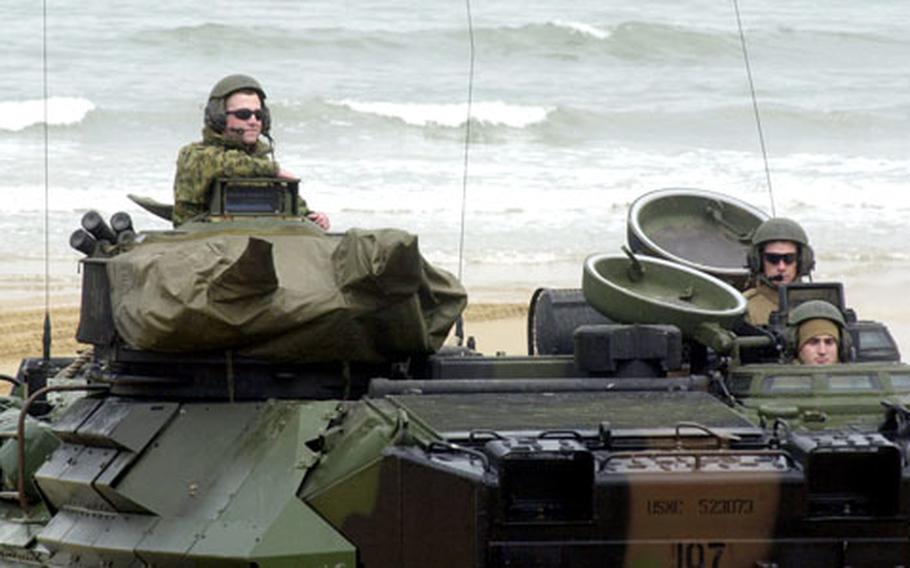 An amphibious assault vehicle crew from Okinawa&#39;s 31st Marine Expeditionary Unit lands on Malipo Beach, about three hours southwest of Seoul in South Korea on Wednesday. The operation, a part of the larger Foal Eagle exercise, included 3,000 U.S. Marines and sailors, along with about 1,400 South Korean Marines and sailors. (Erik Slavin / S&S)

Just before 11 a.m., gray outlines of ships such as the USS Cowpens, out of Yokosuka Naval Base, Japan, appeared just short of the horizon.

As the water got shallower, the tops of the 31st Marine Expeditionary Unit&#8217;s Okinawa-based amphibious assault vehicles poked over the waves and sent plumes of smoke toward the sky.

U.S. helicopters swarmed overhead, where they would provide airstrikes during battle. Meanwhile, the Cowpens and other ships in Commander, Corvette Squadron 32 guarded landing craft and others against inbound threats.

While U.S. and South Korean amphibious vehicles made landfall, two U.S. Navy Landing Craft Air Cushion ships arrived on their flank, one of which deposited a South Korean tank on shore.

&#8220;Our real job starts when the ramp drops,&#8221; said Lance Cpl. Michael Abelar, a squad team leader whose job during war is to run out the back of the amphibious vehicle and begin attacking.

But unlike last year&#8217;s Foal Eagle exercise beach landing, the Marines did not exit their vehicles and storm the beach on foot, citing security reasons.

Last year, protesters stuck stickers on Marine vehicles as they landed on the public beach.

About 40 protesters were allowed to demonstrate on a sidewalk overlooking the beach.

They chanted and waved signs at helicopters, shouting at them to leave the peninsula.

Jung Yong-jun, who said he coordinated the protests as part of the Unification Association, said they didn&#8217;t oppose all military exercises.

However, he said they see RSOI/Foal Eagle and the August Ulchi Focus Lens exercise as &#8220;an attempt to topple the North Korea regime and to assassinate its leaders.&#8221;

The exercise is a step back from recent talks with North Korea to end its nuclear program, said Jung, who also disputed the beach and police blockades Thursday.

Their vehicles landed several blocks away from the demonstration and continued to a staging area.