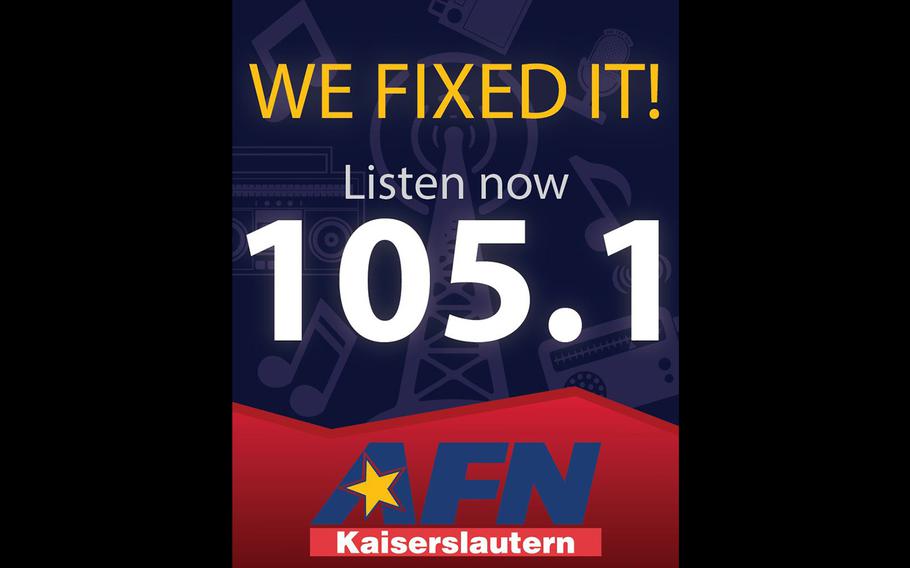 AFN Kaiserslautern will switch to a U.S. radio-friendly frequency on Jan. 18, 2017, to allow local listeners to access the station in American vehicles, the agency announced. (Courtesy AFN Kaiserslautern)

KAISERSLAUTERN, Germany — After years of negotiation, American Forces Network has secured an FM radio frequency compatible with cars made to U.S. specifications for listeners in the Kaiserslautern area, the agency announced this week.

The change will allow the station’s signal to be heard on most modern American car radios, whose digital dials tune to only odd-numbered frequencies.

“This change is a long time coming,” said Master Sgt. Christina Nelson, the AFN Kaiserslautern station manager. “We felt our audience’s frustration at not being able to access their local radio station in their cars, and we wanted to fix it.”

Nelson said AFN worked with the German government and Media Broadcast — Germany’s largest service provider for the broadcast and media industry — to coordinate the frequency change.

While the AFN Kaiserslautern signal strength is expected to remain the same, AFN Wiesbaden will have a smaller reach after the frequency switch, extending mostly to Wiesbaden and the Maniz areas. Until now, it could be heard in Kaiserslautern.

An AFN Wiesbaden post on its Facebook site said that the station currently broadcasts from the Feldburg tower to nearly all of the German state of Hessen and that “our range will be smaller from the new location.”

Deutschland Radio said in its statement that taking over 98.7 from AFN, after more than 10 years of negotiations, will significantly improve its reception, allowing it to reach about 5 million people between Marburg, Aschaffenburg, Bad Kreuznach and Mannheim.

The reduction of American forces in Germany to significantly fewer sites allowed the frequency change, Deutschland Radio said. A network of stations, “tailored to the needs of the American armed forces,” has been created from parts of “the former frequency islands of” Deutschland Radio.