Flying out of Mildenhall, NASA aircraft pulls in cosmic dust for research 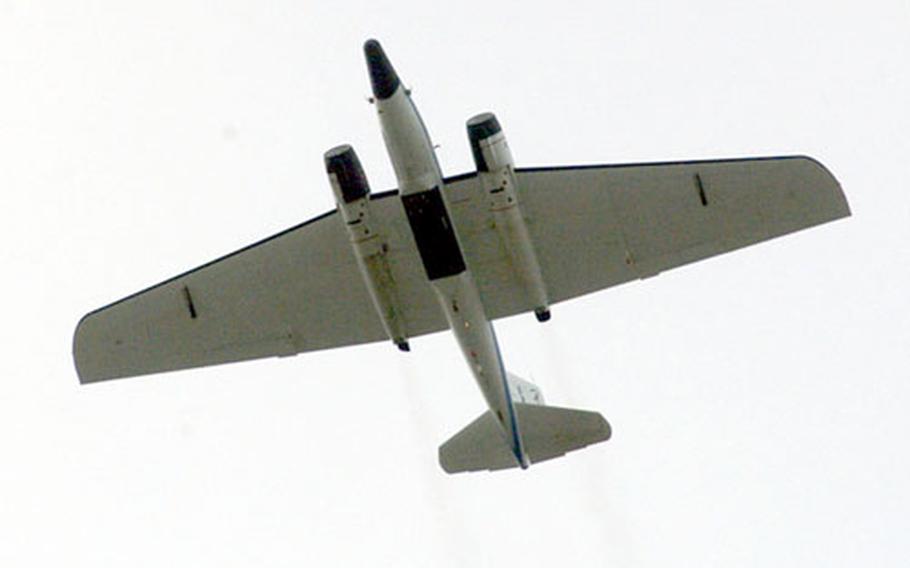 A NASA WB-57 aircraft takes off from RAF Mildenhall. The WB-57 iss scheduled to fly four missions from Mildenhall through the end of the month to collect cosmic dust. (Jason Chudy / S&S)

This NASA high-altitude research aircraft is in Britain this month to collect samples of cosmic dust - little bits of comets and asteroids floating high in the Earth&#39;s atmosphere.

The aircraft and a handful of NASA personnel arrived at Mildenhall early last week on their first cosmic dust collection missions in Europe.

The WB-57 made its first flight from Mildenhall on Friday and was scheduled to fly another mission on Saturday and, depending on the weather, will fly two more missions this week.

The NASA team includes about 15 members, including two pilots and maintenance and research personnel. The personnel and a large NASA van were flown to Mildenhall aboard a C-5 Galaxy transport aircraft from their home base at the Johnson Space Center in Houston.

Mission manager Bud Meins said scientists are working to create a worldwide database of cosmic dust levels and NASA&#39;s Mildenhall missions are the first on this side of the Atlantic.

Mildenhall was chosen, Meins said, because it has three things necessary for the missions &#8212; a long runway, JP-8 jet fuel and liquid oxygen, which is used for breathing by the two-man flight crew at high altitudes.

At the higher altitudes, explained pilot Bill Ehrenstrom, "we can see the curvature of the Earth and the sky gets really dark."

It&#39;ll take the aircraft about 45 minutes to get to the proper altitude after takeoff and another 45 minutes to return to Earth once the mission&#39;s complete. The WB-57 has a range of about 2,500 miles and can carry a payload of about 4,000 pounds.

Once at their pre-assigned altitude, the NASA systems equipment operators will deploy two small particle collectors that hang from the aircraft&#39;s 122-foot wingspan.

The collectors only deploy above about 48,500 feet, Meins said, allowing them to collect these cosmic particles, rather than any other particles trapped in the Earth&#39;s atmosphere.

Despite the high altitudes, these flights aren&#39;t that demanding of the crews.

The particles will stick to the collector, which will be removed on landing and held in a special storage area until it is sent to scientists at the Johnson Space Center.

The dust particles are, according to Michael Zolensky of NASA&#39;s Cosmic Dust Laboratory, "our only samples of the most primitive materials in the solar system &#8212; pieces of comets and very water &#8212; and organic-rich asteroids.

"Thus they provide a critical window onto the formation of the sun and planets, and the early evolution of the solar system," he wrote in an e-mail to Stars and Stripes.

"The Canberra&#39;s one of the few aircraft that operates well in the stratosphere," Meins said. "That&#39;s the reason that scientists love this aircraft."

At these altitudes, the aircraft&#39;s two-man crew requires pressure suits, similar to those worn by astronauts.

During their flights from Mildenhall, however, pilots Ehrenstrom and Scott Reagan and systems equipment operators Tushar Suthar and Brian Barnett won&#39;t have to wear the suits because of the lower operating altitudes.

Although this is the first visit to England by the 68-foot-long WB-57, the twin-engine aircraft traces its history to the British Canberra bomber, which was designed in 1945.

The aircraft deployed to Mildenhall was built in the Dallas/Fort Worth area in 1963 and was modified for research missions in the 1970s. It&#39;s one of two operated by NASA. Extra length was added to the wings for high-altitude flights.

These long wings, explained Meins, are filled with fuel and become so heavy and droop so low that they have to worry about the wings hitting the small signs along the taxiways and runways.