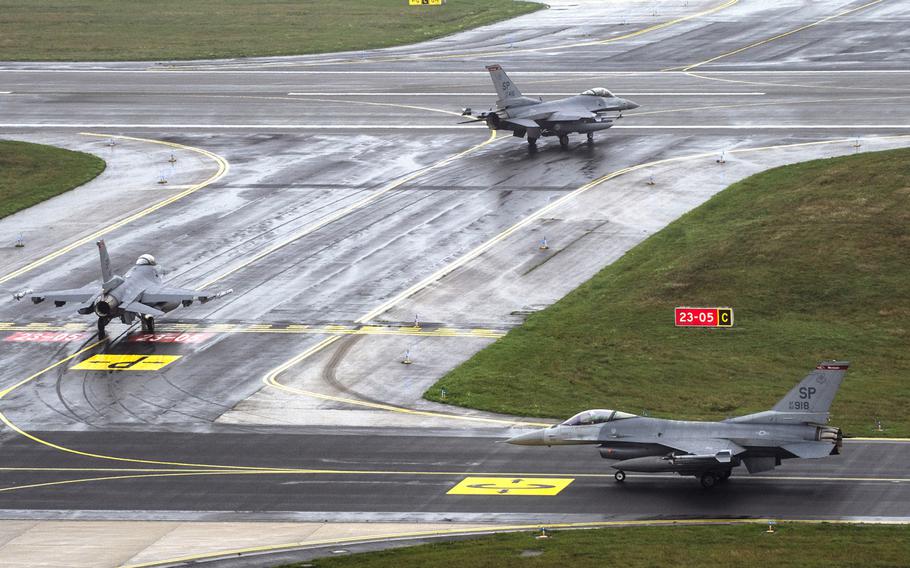 U.S. Air Force F-16 Fighting Falcons, assigned to the 480th Fighter Squadron, taxi on the flightline at Spangdahlem Air Base, Germany, Oct. 1, 2019. Flying operations at Spangdahlem were briefly halted after the crash of an F-16 on Tuesday, Oct. 8, 2019, but are expected to resume next week, . (Valerie Seelye/U.S. Air Force)

KAISERSLAUTERN, Germany – F-16s at Spangdahlem Air Base are expected to resume flying next week, following a brief pause after the crash Tuesday of one the base’s Fighting Falcons, a base official said.

Flight operations were temporarily halted “to give the base and community time and space to respond to the incident,” said Capt. Erin Recanzone, a spokeswoman for the 52nd Fighter Wing. “Flying is likely to resume next week.”

An exercise to test the base’s wartime readiness was stopped two days early following the crash.

“Our top priority right now is the safety of our airmen and our local community,” Col. Jason Hokaj, 52nd Fighter Wing vice commander, said in a statement. “We are very grateful to our local German first responders for all the support they have provided and appreciate the community’s patience throughout the ongoing safety investigation.”

German emergency officials were the first on the scene Tuesday when an F-16 crashed in an isolated, wooded area near the German town of Zemmer-Rodt, a few miles south of the base and north of the city of Trier. The pilot safely ejected and was treated at the base hospital for minor injuries, officials said.

The Air Force is investigating the cause of the crash.