Flying knights with feet on the ground 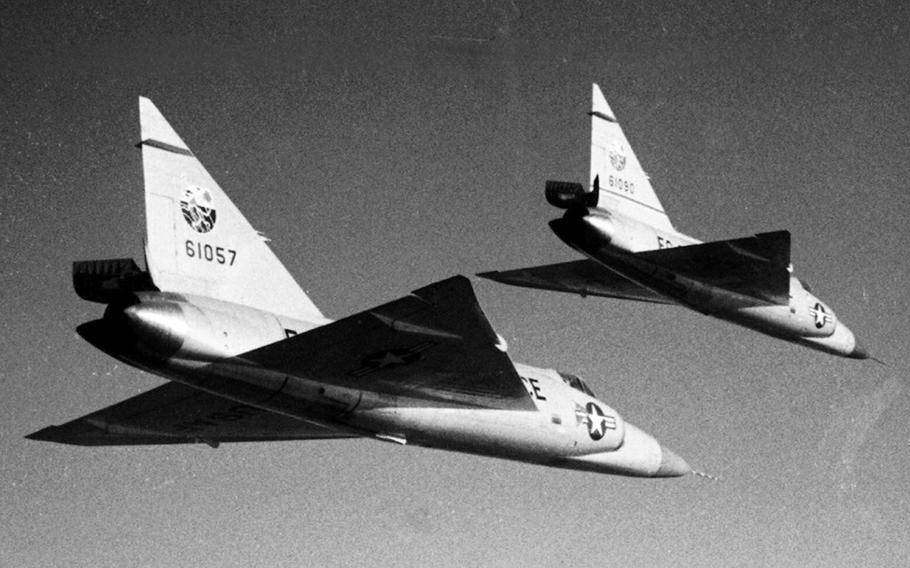 THE FIGHTER PILOT streaking through the sky at supersonic speed in search of an unseen enemy may be, the last romantic figure in warfare.

Tomorrow, he is destined to disappear into the pages of history beside the other gallant knights riding forth to do battle.

But a fighter pilot lives in the present, and today he is still too busy blasting off into the thin blue air miles above the earth to worry about the push-buttons of tomorrow.

Few peacetime pilots have faced a greater responsibility than the 3,000 men of USAFE's 65th Air Div in Spain. Their job: Protect the powerful concentration of U.S. Forces in Spain, ranging from SAC bombers to Navy bases, from radar sites to the 485-mile fuel pipeline serving the air bases.

This duty is shared by two squadrons of dart-shaped F102s, the 497th at Torrejon Air Base and the 431st at Zaragoza Air Base, along with the needle-nosed F104s of the 157th at Morón Air Base.

Around the clock, in fair weather and foul, they are "minding the store."

Time was when a fighter pilot was a lone wolf, roaring off on the dawn patrol to fight his private little war. Today he needs — and gets — a lot of help.

First, he flies stick and glove with the pilots of the Spanish Air Force. F86s manned by Spanish pilots are poised side by side with the planes of the 65th.

Secondly, a pilot would have little chance of spotting his target without the radar eyes of the seven AC&W sites staked out around Spain and Mallorca. Here, too, the Spanish and Americans work side by side.

And finally, there is the vital role of the battle commanders at headquarters.

Here in a closely guarded, darkened amphitheater, some 100 men work at desks on four levels under ghostly blue lights. TV sets provide up-to-the-minute weather data. Communications specialists stand ready to attack any breakdown. Brisk orders are issued into dozens of telephones as each man flips the keys on his own individual switchboard.

Attention is riveted on a massive plexiglas screen, wide as the room and 20 feet high. On the screen is an outline of the Spain area criss-crossed with numbered lines. The screen is lighted from within, changing colors with the battle conditions.

Strange marks appear on the screen as if by magic. Men working in the dark behind the screen on a three-level platform use water solvent pencils and reverse writing to mark the location and direction of each plane.

At the sides are panels bearing such cryptic names as "cocked pistol" and "lemon juice." These panels tell the commander which planes have been scrambled.

Overlooking the arena from the rear are the men with the ultimate responsibility — the battle commanders. Col A. J. Evans Jr., CO of the 65th, and Gen Angel Salas Larrazabal of the Spanish Air Force usually occupy these key chairs during major alerts.

There are some 800 flights a day over Spain-up to 1,000 during the summer months — and every unidentified plane must be checked out-fast. Pilots who fail to file flight plans for Spain soon have company.

"These exercises are more difficult than combat conditions in some respects, because the planes supposedly shot down do not disappear from the radar screen," explained Col W. A. Bennett, chief of combat operations.

Running the show involves considerably more than just pushing the panic button that sends the pilots blasting. out of the twin alert hangars, huge concrete shells open at both ends, within three minutes.

The battle commanders must launch the fighters at the right time for the best possible intercept-preferably before the intruder reaches Spain.

At times it is necessary to scramble several fighters to block a single intruder. And if a pilot runs low of fuel, he can land and be back in the air within 15 minutes.

Speed, altitude and direction of the intruder usually determines from which base American or Spanish planes, poised in twin pairs at the alert hangars, will be scrambled.

The tense activity at the command post is dramatic indeed, but flying an actual mission is something else again.

Capt John Anderson of the 431st grips the throttle lever with his left hand and sends his sleek F102 rumbling forward. In the belly of the plane are Falcon missiles, both radar and heat-seeking types, plus deadly 2.75 rockets.

"Torrejon tower this is Delta Tango 35 scramble," Anderson says into the mike built into his oxygen mask.

Anderson and his wingman line up on the runway for a double takeoff. The planes quiver like racehorses at the starting gate as the power builds up.

"Rolling," calls out Anderson as he releases his brakes.

The planes surge forward and Anderson hits the "AB" — the afterburner. The planes slow for a split second — then comes the explosion of power that sends them hurtling down the runway like comets.

The pilot is slammed back against his seat as the speed quickly builds up to 175 m.p.h. and the runway slices by on each side.

Suddenly there is a muffled "whomp" inside the cockpit and the air is filled with a strange fog mixed with "snowflakes." But there is no cause for alarm — it is merely a quick condensation of the air common on takeoff in jets.

The plane hurtles past the 3,000-foot marker and Anderson pulls back on the twin handles of the control stick as he calls out "lifting off."

The ground disappears almost immediately as the two planes bank away and shoot up into the low clouds. The altimeter spins like an alarm clock gone crazy and the "deuce" zooms into the sky at more than 6,000 feet a minute.

Perhaps the most surprising thing is the absence of noise. Despite the fantastic power pouring from the tail of the plane, the noise of the air whipping by the windshield is louder than the engine.

Anderson continues to get directions from the radar station far below and his plane barrels out of the clouds at 16,000 feet.

He reaches to flip down the visor as brilliant sun floods the cockpit with blinding intensity. Below, the undercast resembles an unlimited blanket of cotton. Above is the cold blue air that is home to a fighter pilot.

The altimeter continues to click off the 1,000-foot marks until Anderson levels off. It seems only seconds since the plane left the ground, but the altimeter reads 32,000 feet.

There is not even a shudder as the plane slips past the speed of sound and builds up an airspeed of almost 800 mph.

Inside the pressurized cockpit, Anderson sits comfortably in a thin cotton flying suit. Outside, the temperature is almost 50 degrees below zero.

Without warning, the plane is suddenly slammed around roughly. This clear-air turbulence is a constant danger in the high altitudes where the jet streams flow.

Anderson continues to receive instructions from the radar site, but he begins to watch the sweeping hand of his own scope with greater intensity.

A small dot suddenly appears at the edge of the scope. Anderson radios "Taking a Judy" — the signal meaning he has spotted his quarry and is taking over the pursuit.

But instead of giving chase in the old dogfight tradition, Anderson flies at an angle to intercept. You don't chase planes in these days of supersonic speeds.

Anderson decides to use a "90-20" approach. This means flying at 90 degrees to broadside the path of the other plane, then turning to fire the missiles from a 20degree angle. The computer in the radar set fires the deadly cargo automatically.

If he prefers, he can use a "snap-up" — flying underneath the path of the intruder and flipping up the nose of the F102 just in time to fire.

The other plane remains just a dot on Anderson's radar screen as he guides his jet toward the firing point.

Anderson keeps his eyes glued to the dark funnel of his radar scope, without looking up, as the range drops from 10,000 yards, closer and closer. The circle on his scope closes in on the dot as if to strangle it.

Then comes the critical moment. He must hold the dot exactly in the center of his target scope before the firing. By now the other plane would be visible, but Anderson doesn't take his eyes away from the scope for even a split second.

The seconds tick by as Anderson holds the dot in exactly the right position.

He touches the red button on his stick and calls out "Splash" just as a large "X" flashes on his radar scope. Instantly he pulls the stick hard to the right and rolls the plane upside down as he breaks away, saying, "We got ourselves an airplane."

The horizon spins and then rights itself, but there is no sensation of being upside down. The speed and centrifugal force keep the pilot planted firmly in his seat.

Anderson turns and heads for home, going back under control of the ground radar station. Actually, almost the entire mission could have been flown on automatic pilot with the ground controllers calling the shots, but the pilots must keep in training to go it alone.

The target plane pulls up alongside Anderson and together they barrel down into the thick clouds that separate them from the earth,

Rain starts to pepper the plane, but this is no problem for the all-weather F102s. The "windshield wiper" is a spray of air under powerful pressure that keeps the windshield dry in the worst downpours.

The planes shoot on down into the soup at 5,000 feet a minute and soon near the base.

Then trouble develops — not for Anderson and his wingman, but for another F102 pilot.

The pilot flashes that he has a cracked windshield and needs to land immediately. If the windshield should give way before he gets on the ground, he would have to attempt to land with a 200 mph air blast hitting him in the face — or bail out.

Strangely enough, the danger isn't that the windshield will cave in on the pilot, but rather that it will peel off and be ripped away in the slip stream. The pressure inside the cockpit makes the difference.

The pilot in trouble, accompanied by his wingman, nears the runway.

The half-inch glass of the windshield holds and the pilot lands safely as his wingman roars away under full power.

Anderson and his wingman turn into the final approach pattern and streak for the end of the runway. They touch down at 175 mph and the planes vibrate sharply until the drag chutes are released. Then the aircraft slow quickly.

Anderson has not even touched his brakes as he pulls off the main runway and disconnects his drag chute with a loud popping of air pressure being released.

He taxis on back to the ramp, the mission over.

When asked if he felt it would be difficult to like any other job after flying the blowtorches, Anderson replied in complete honesty with the drawl from his homeland, Athens, Ala.