'Flying Dragons' prepare for move from South Korea to Alaska 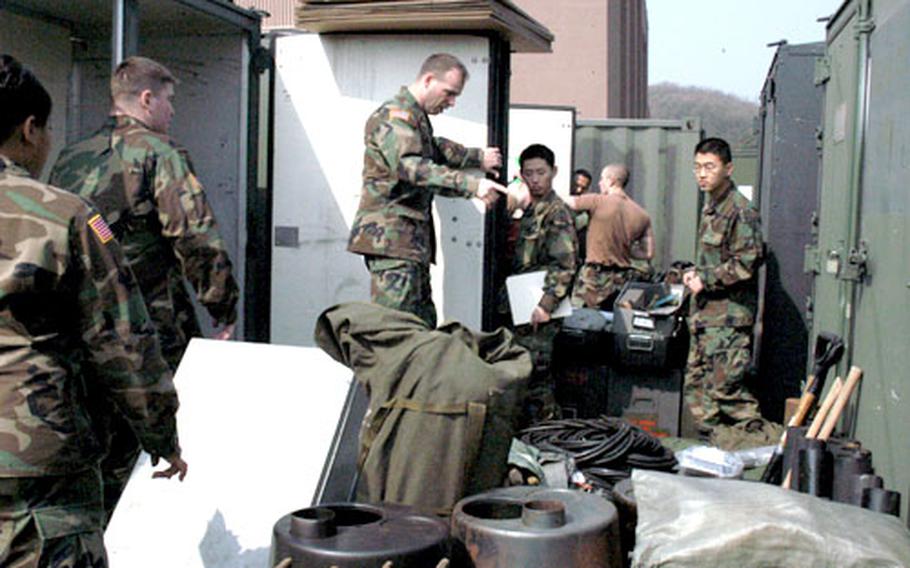 K-16 AIR BASE, South Korea &#8212; It takes more than a village of pilots, mechanics and trained rescuers to move the 1st Battalion, 52nd Aviation Regiment across the Pacific Ocean.

The move is part of the Army&#8217;s overall transformation process and plan to decrease troop strength in South Korea by a third over the next few years, said Capt. Douglas Fullerton, who is coordinating much of the move.

Also reflected is a change in how the Army has viewed aviation the past few decades, Fullerton said. Instead of keeping all pilots, helicopters and planes in isolated units, the Pentagon wants to scatter a variety of specialties and equipment at more outposts throughout the world.

That translates into the 1-52 being pulled apart. One company will stay in South Korea as part of the 2nd Infantry Division, continuing to fly important visitors and flag officers around the peninsula. That unit also will assume responsibility for basic equipment moves throughout South Korea, a task now performed by a separate company within the regiment, Fullerton said.

About 150 of the 450 soldiers within 1-52 will stay in South Korea. But the rest &#8212; and eight Chinooks &#8212; are to go stateside, he said. The remaining mix of about 24 helicopters and C-12 Huron fixed-wing aircraft also will scatter. Some go to Fort Bragg and Fort Drum, said Capt. Robert Herrera, who helps oversee the regiment&#8217;s flight equipment and flight budgets. Eight Chinooks will stay here, he said.

As with most moves, this one involves taking inventory. Because of the relatively short assignments in South Korea &#8212; most soldiers stay just a year &#8212; keeping track hasn&#8217;t been as systematic as it should have been, Fullerton said.

U.S. Forces Korea leaders have indicated they appreciate the problem. In March, USFK commander Gen. Leon J. LaPorte ordered units preparing to move to be sure to take only equipment that should be assigned to them according to the latest Pentagon regulations, Fullerton said, meaning that units remaining here can reap the benefits of extra trucks and aviation equipment.

The regiment, the Flying Dragons, will hold its encasing ceremony next month and will be in Alaska by mid-June, Fullerton said.

But the unit has changed before, Fullerton said, from its origin in 1940 as a truck transportation regiment in California and during the Korean War, then as an aviation regiment in North Carolina, Vietnam and finally South Korea.