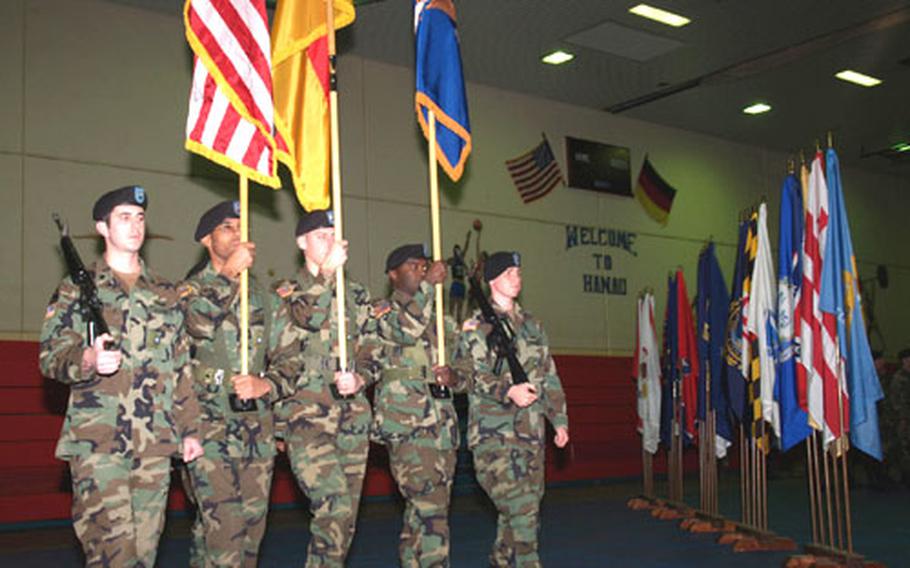 The 1st Battalion, 501st Aviation Regiment cased its colors on Thursday in Hanau, Germany. The unit is returning to the States to begin training on the AH-64D Apache Longbow. The new helicopter is replacing the AH-64A Apache. Once training is complete, the unit will return to Germany. (Courtesy of U.S. Army / S&S)

A 1st Armored Division attack helicopter battalion in Hanau, Germany, is packing up and moving to Texas for the next year.

The 1st Battalion, 501st Aviation Regiment cased its colors during a ceremony on Fliegerhorst Casern on Thursday to prepare for the yearlong training mission and attack helicopter upgrade.

&#8220;It is tradition for the colors to accompany the unit wherever it goes,&#8221; Maj. Mike Indovina, 1st AD spokesman, said during a telephone interview on Sunday.

The battalion, known as the Flying Dragons, will soon be in Fort Hood, Texas, upgrading the fleet of AH-64A Apaches to the newer AH-64D Apache Longbow. &#8220;The pilots and crew chiefs will be trained on the upgraded Longbow system. It is crucial that the system and the soldier be trained as a package,&#8221; Indovina said in an e-mail message.

&#8220;The training of soldier and system will enhance the future war-fighting capability for the division and the U.S. Army.&#8221; Some of the training will take place at Fort Rucker, Ala., he stated.

The Longbow Unit Fielding Program is taking about 70 soldiers and their families to the States, while nearly 90 other troops will be reassigned within Germany.

&#8220;It&#8217;s kind of sad to see the unit go. &#8230; I would have liked to stay in Germany a little longer,&#8221; Spc. Michael Johnston, a servicemember who is going back to the States with the unit, said after Thursday&#8217;s ceremony. Some of the battalion&#8217;s soldiers will not be headed stateside because they will not have enough time left on their current tour to complete the training and return to Germany, Indovina said.

After the training, the unit and its new helicopters will return to Hanau and pick up where it left off. The Flying Dragons most recently deployed from May 2003 to July 2004 in support of Operation Iraqi Freedom. Task Force 1-501st ATK conducted daily reconnaissance and security operations around Baghdad.