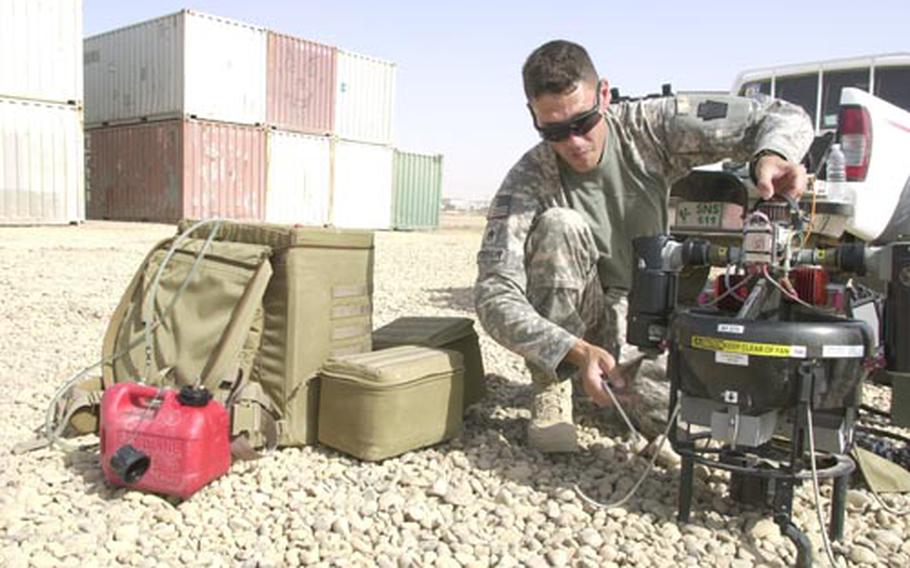 Staff Sgt. Todd Patterson, a member of the Pennsylvania guard&#39;s 56th Stryker Brigade Combat Team, sets up a GMAV -- a gas micro air vehicle -- at Camp Taji in Iraq. This small, unmanned aerial vehicle lets one soldier carry, assemble, fly and monitor an area individually. These prototypes, made by Honeywell, cost about $400,000 per system, which include two vehicles. (Teri Weaver / S&S)

CAMP TAJI, Iraq &#8212; It starts with a pull cord, sounds like a high-powered weed whacker and looks like a motorized bucket with legs.

Soldiers in the field have already given it a nickname &#8212; the "flying beer keg."

But this keg dispenses something more valuable than frosty ale, even for thirsty troops in Iraq. The Gas Micro Air Vehicle gives an individual soldier a view around corners and on the roofs of buildings without having to call back to headquarters for help.

"The soldiers who are beating the dirt are the ones who are able to fly it," said Kevin Bogert, a field service engineer and instructor with Honeywell who is training Pennsylvania guardsmen at Camp Taji on the new equipment.

Bogert and other Honeywell staff are training and supplying prototype GMAVs for soldiers with the 56th Stryker Brigade Combat Team, part of the Pennsylvania National Guard.

As of late June, they had issued nine systems in an area north of Baghdad.

The GMAV is meant to supplement the Army&#8217;s Raven, another small unmanned aerial vehicle that also can quickly scan an area.

But where the Raven makes sweeps across streets and fields, the GMAV can hover, Bogert said.

"This thing is your big brother," said Staff Sgt. Todd Patterson, a member of Headquarter and Headquarters Company, 2nd Battalion, 112th Infantry Regiment with the brigade.

"It just cuts down on the number of things a soldier has to worry about."

The one thing it doesn&#8217;t cut down on, however, is the number of things a soldier has to carry, added Patterson, who was training on the system a couple of weeks ago.

Patterson said it would be unlikely anyone in his unit would actually hump it out to the field.

But he said there was room for the unit in a truck, and he could preassemble much of it to work for a group in a convoy.

The GMAV can fly for about 40 minutes, as fast as 45 mph, at heights reaching 300 feet, Bogert said. It has a stationary camera that gives real-time footage. It is loud, but it wasn&#8217;t created as a stealth asset.

Its whirling engine, in fact, could chase the enemy away, Patterson said.

Honeywell produced 16 of these prototype systems, which include two vehicles, for about $400,000 each.

Newer ones are about to come off the factory floor in Albuquerque, N.M., that have an adjustable camera and run on a fuel injection engine, Bogert said.