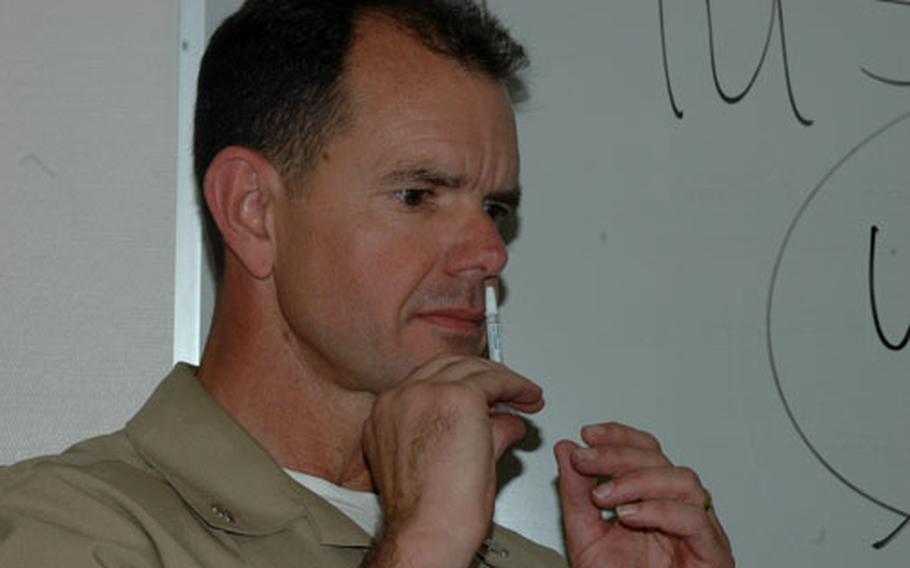 NAPLES, Italy &#8212; Either roll up those shirt sleeves or flare those nostrils, because the flu vaccines are here.

Throughout Europe this week, servicemembers began receiving doses to fend off influenza that can make people feverish and achy, suffer from sore throats and runny noses, or have bouts of nausea, vomiting and diarrhea. At times, it can be fatal.

Flu vaccinations are mandatory for U.S. servicemembers, who will receive it via the flu mist &#8212; similar to a nasal spray &#8212; provided they don&#8217;t have any at-risk factors such as pre-existing medical conditions, are pregnant or allergic, said Army and Navy medical officials.

The reason for using the mist isn&#8217;t a cost-saving one, stressed Lt. Sherry Hayes, an environmental officer for U.S. Naval Hospital Naples.

In fact, the mist, commercially known as FluMist, costs the same or slightly more than the injected vaccine. But because the mist is a weakened form of the live virus, she said, it proves more protective.

Those with at-risk health conditions, such as compromised immune systems, asthma and even pregnancy, however, might not be strong enough to overcome the virus and thus are injected with the vaccine, she said.

Unlike in the past, there is no anticipated vaccine shortage this year, medical officials said.

&#8220;Who wants it, gets it. We can always order more,&#8221; said Naples hospital spokeswoman Lt. Jennifer Wallinger.

Typically, flu season runs October through May, though the peak period in Europe is February, Hayes said. The peak period is January in the States. Last year in Europe, about 300 cases were reported to U.S. Army medical facilities. None was fatal.

The second wave of inoculations, those who are not active duty or classified at-risk, will begin in the coming weeks, depending on when hospitals and clinics receive supplies.

The vaccine is an effective prevention, Newberg stressed, but not the only one.

&#8220;Hand-washing is critical, and not smoking really protects your lungs,&#8221; he said, citing other preventive measures such as covering your face when you sneeze or cough, and avoiding shaking peoples&#8217; hands, especially if ill. &#8220;Those will go a long way to keep people healthy.&#8221;