Flu cases down in Pacific, but shots are advised 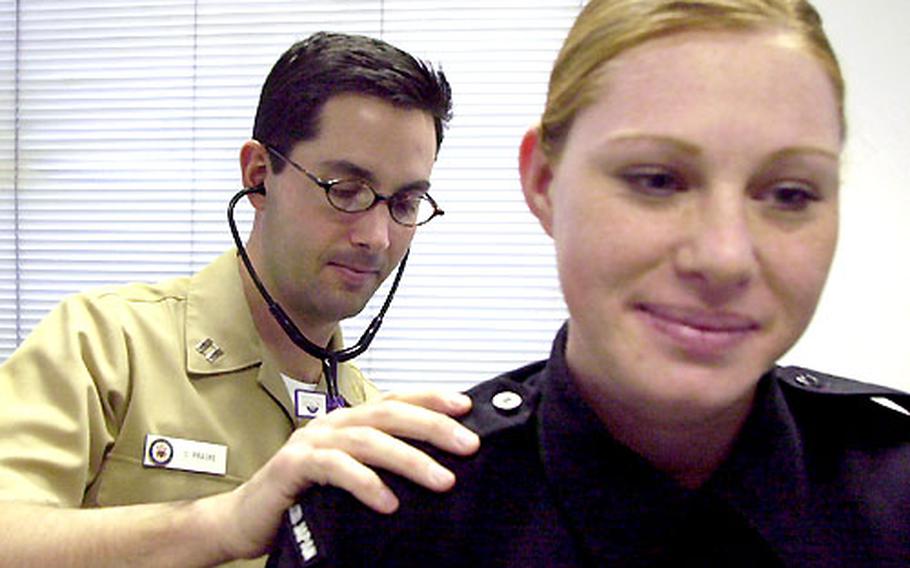 Lt. Steve Praske, a physician at the Navy Branch Medical Clinic at Sasebo Naval Base, Japan, listens to the breathing of Hospitalman Summer Plakk. Praske says it’s not too late to get a flu shot. (Greg Tyler / S&S)

Lt. Steve Praske, a physician at the Navy Branch Medical Clinic at Sasebo Naval Base, Japan, listens to the breathing of Hospitalman Summer Plakk. Praske says it’s not too late to get a flu shot. (Greg Tyler / S&S) 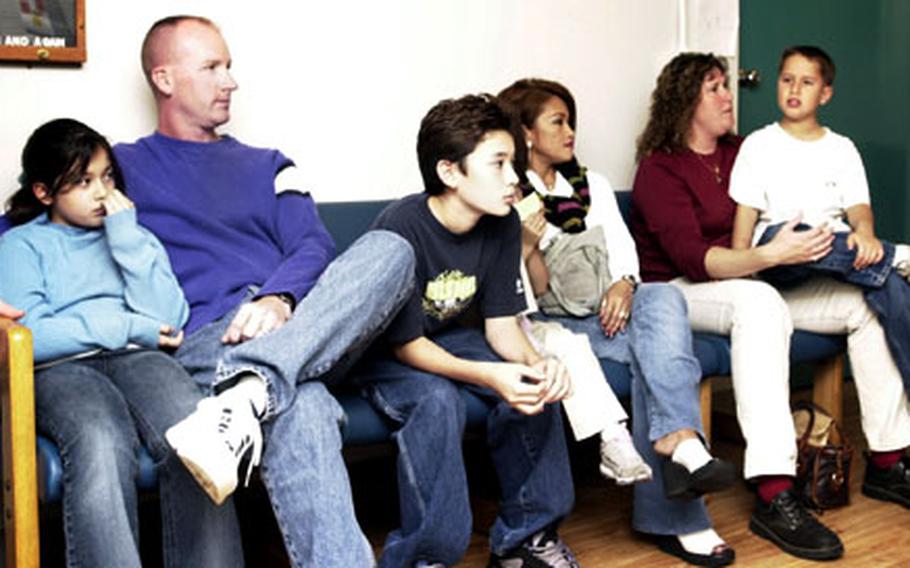 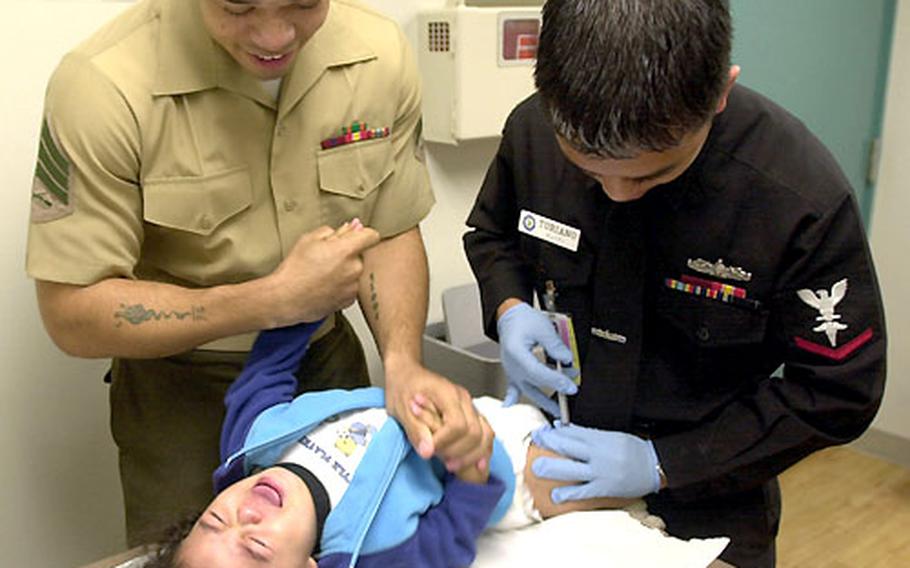 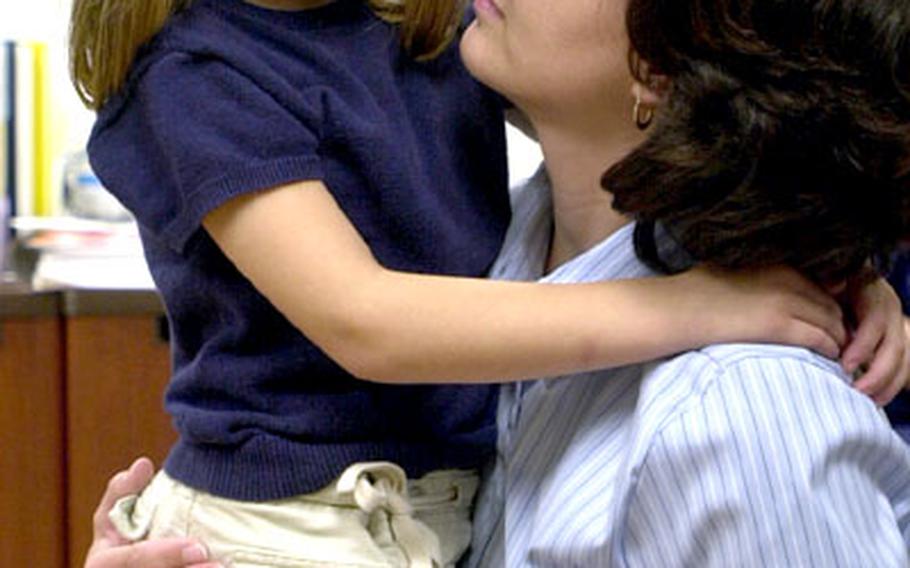 Johanna Gilbert talks to her daughter, Emily, to try and comfort her fears about getting a flu shot at the U.S. Naval Hospital Okinawa. (Fred Zimmerman / S&S)

SASEBO NAVAL BASE, Japan &#8212; Influenza cases on mainland Japan this year are about a third of last year&#8217;s number.

U.S. military officials are calling flu cases &#8220;sporadic,&#8221; while Japanese health care professionals say there is no reason to worry.

&#8220;More than 90 percent of active-duty servicemembers and most high-risk patients have been immunized,&#8221; Yokosuka Naval Base hospital spokesman Bill Doughty said last week.

But that doesn&#8217;t mean everyone is out of the woods.

Doughty said his hospital ran out of flu vaccine for children younger than 4. While that&#8217;s on order, there is plenty available for others.

At U.S. military bases, shots are first given to servicemembers, health-care workers, child-care givers, teachers and high-risk residents such as children 6 to 23 months old, adults older than 65, pregnant women and those with chronic medical conditions.

&#8220;Supplies [children&#8217;s vaccine] have been ordered, and we are looking at ways to immunize these patients as soon as possible,&#8221; Doughty said. &#8220;As for when we will receive the additional supply, we are somewhat at the mercy of the system at present because of the current overall need for vaccine in the U.S.&#8221;

Despite the low flu case rate, ministry officials aren&#8217;t taking any chances and are educating the public about influenza through Web sites, posters and brochures.

The picture isn&#8217;t nearly as rosy in the United States, where the flu has already claimed at least 42 children.

An estimated 36,000 people in the States die annually from the flu, and 20 percent of the population contracts a form of the virus each year, the Associated Press reported.

&#8220;Now would be a good time&#8221; to get a flu shot, Praske said, noting cases generally become more frequent in late December and January.

Praske advises residents not to panic if they become ill &#8212; they could just have a cold.

More than 100 viruses cause colds, according to a recent Yokosuka Naval Hospital pamphlet. Colds generally produce a mild to moderate fever, runny nose, cough and possibly a sore throat for up to 10 days. They&#8217;re best treated by drinking plenty of fluids, getting rest and taking medications that reduce fever and discomfort, the article said.

Elsewhere in the Pacific region, the number of reported influenza cases on Guam peaked between Oct. 5 and 11, according to the Marianas Variety newspaper.

Officials there say they&#8217;re watching for a possible reappearance of the flu as the season continues and more American travelers visit the island.

Symptoms of flu include:

Get a flu shot (including infants 6 months old and older).Avoid close contact with people who are sick. When you are sick, keep your distance from others to protect them from getting sick too.Stay home when you are sick.Cover your mouth and nose with a tissue when coughing or sneezing.Wash your hands often to protect yourself from germs.Avoid touching your eyes, nose or mouth.Home remedies

Every doctor says the same thing: the only thing that will cure the flu is rest. Because it is a virus, antibiotics will do nothing for the flu. Doctors recommend treating the symptoms (taking aspirin for headaches or muscle aches, etc.) and getting plenty of fluids and rest. Avoid alcohol and tobacco.

When to see a doctor

According to the Centers for Disease Control and Prevention, if symptoms persist for more than a week and don&#8217;t start resolving themselves, it is time to see a doctor. This advice is especially applicable for children.