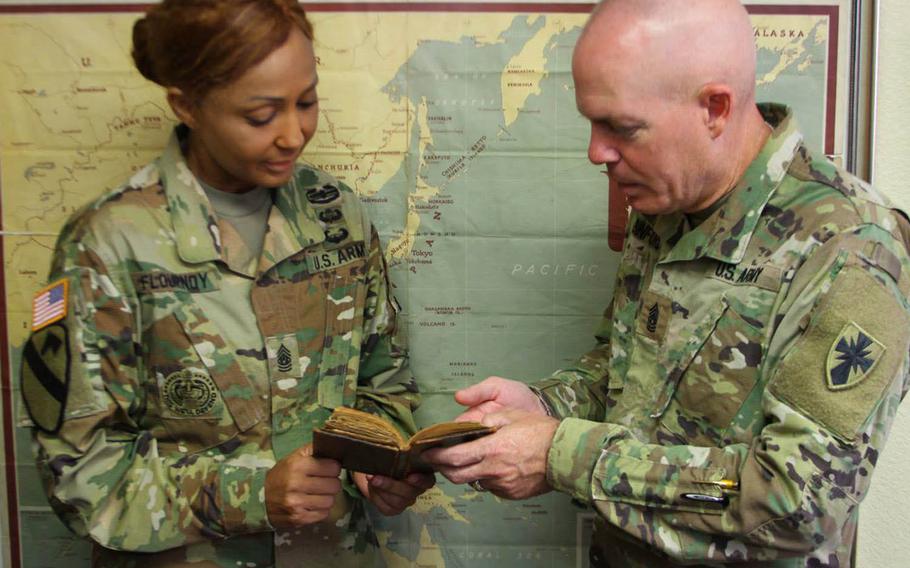 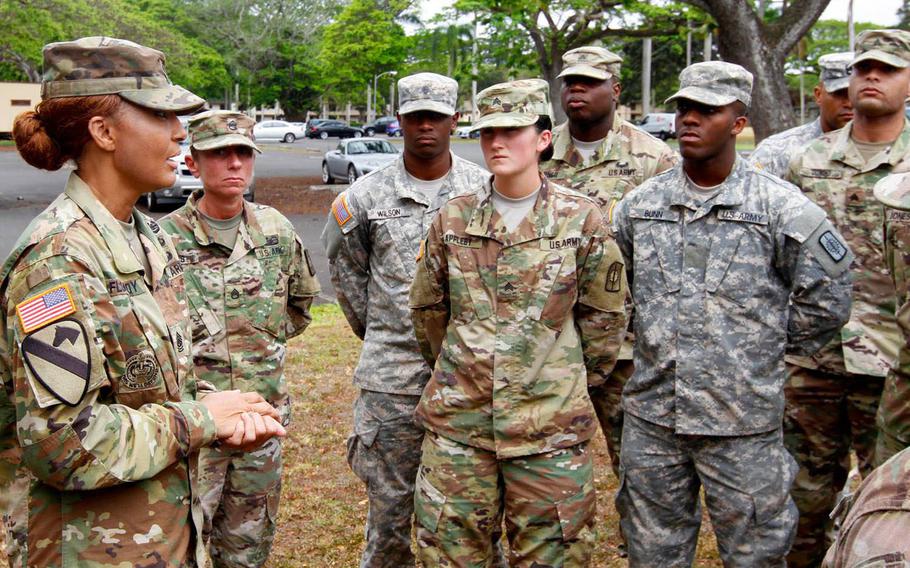 Command Sgt. Maj. Angelia Flournoy, left, discusses the recent social-media firestorm with the enlisted soldiers of the 8th Military Police Brigade staff on Wednesday, May 4, 2016, in a photo posted to the brigade's Facebook page. (Courtesy of U.S. Army) 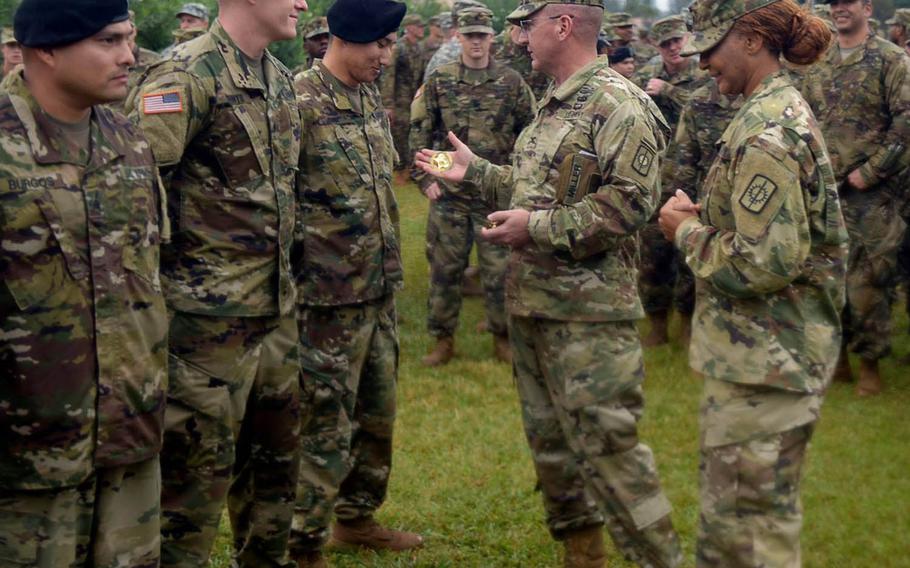 Command Sgt. Maj. Angelia Flournoy, far right, of the 8th Military Police Brigade at Schofield Barracks, Hawaii, is receiving counseling for wearing hairstyles, makeup and clothing not conforming to Army regulations. Some photos show Flournoy's hair hanging over her collar, while others show her wearing high heels while in uniform. (Courtesy of U.S. Army)

FORT SHAFTER, Hawaii — A command sergeant major whose out-of-regulation hairstyles, makeup and clothing sparked a firestorm of social media criticism is receiving counseling and has expressed “regret” for the distraction she has caused.

Photos show Flournoy’s hair hanging over her collar, while others show her wearing high heels while in uniform.

Some online commenters, who claim first-hand experience with Flournoy, describe her as imperious, long ignoring so-called “spot corrections” made by fellow soldiers pointing out her out-of-regulation attire. Others related disparaging anecdotes and second-hand gossip, and commenters turned their ire on MPB command after Facebook posts were deleted and photos removed.

Late Wednesday, Flournoy posted a statement on the 8th MPB’s Facebook page, saying: “I appreciate those who have corrected me and expressed their concern about my appearance not being fully in compliance with” regulations.

“You are right to insist standards be set and met by all soldiers,” she wrote. “I sincerely regret how this has distracted from the great things the 8th Military Police soldiers are doing around the world.”

The 8th MPS is responsible for military policing in the Pacific region.

Maj. Leslie Waddle, a spokesperson for the 8th Theater Sustainment Command, said the entire affair had made Flournoy “very humble.”

“The command is definitely aware,” she said. “The command has brought her in for counseling.” She said the command at 8th TSC, which has oversight of the military police brigade, considers the matter resolved.

Waddle said TSC Command Sgt. Maj. Gregory Binford met with Flournoy “immediately” after command became aware of the photos, many of which commenters have altered into memes, and has been counseling her.

“It’s definitely gotten misconstrued on the internet, for sure,” Waddle said. “He’s definitely been mentoring her, and she’s been very humble about it.”

In a statement posted on the 8th TSC Facebook page Wednesday, Binford wrote that “a humble leader can selflessly accept criticism” and that when “that epiphany comes, and the decision to change is made, it is a moment worthy of respect.”

“I believe CSM Flournoy has had that epiphany after our discussions about the important role we play as senior NCOs,” he wrote. “This is a moment of extreme humility, but only from that moment can a leader truly improve. I would encourage all leaders across the TSC, enlisted and officer alike, to look at themselves, be receptive to criticism, and be willing to change.”