Florida man is king of the care packages 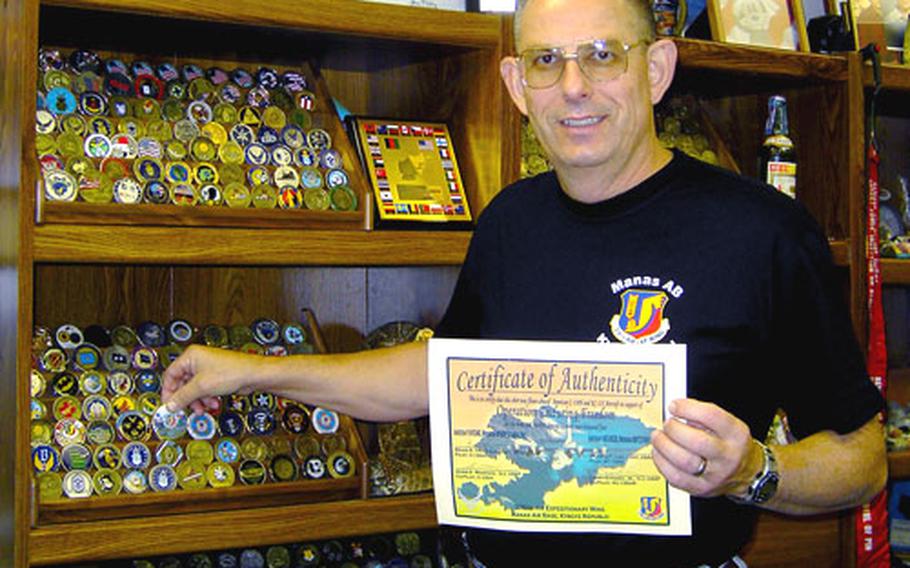 Bob Williams poses with some of the commander’s coins and a certificate he has received from grateful troops for his many shipments of items great and small. (Photo courtesy of Bob Williams)

Bob Williams poses with some of the commander’s coins and a certificate he has received from grateful troops for his many shipments of items great and small. (Photo courtesy of Bob Williams) 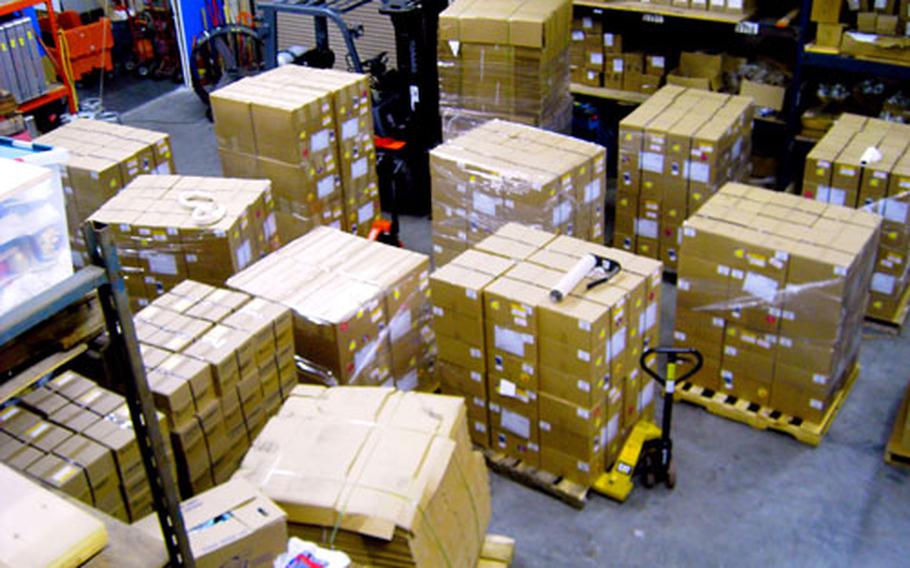 Boxes filled, sealed and addressed sit in a warehouse near Tampa, Fla., waiting to be mailed by Bob Williams. Each week, he sends about 215 boxes to troops at some 200 combat-zone bases. (Photo courtesy of Bob Williams) 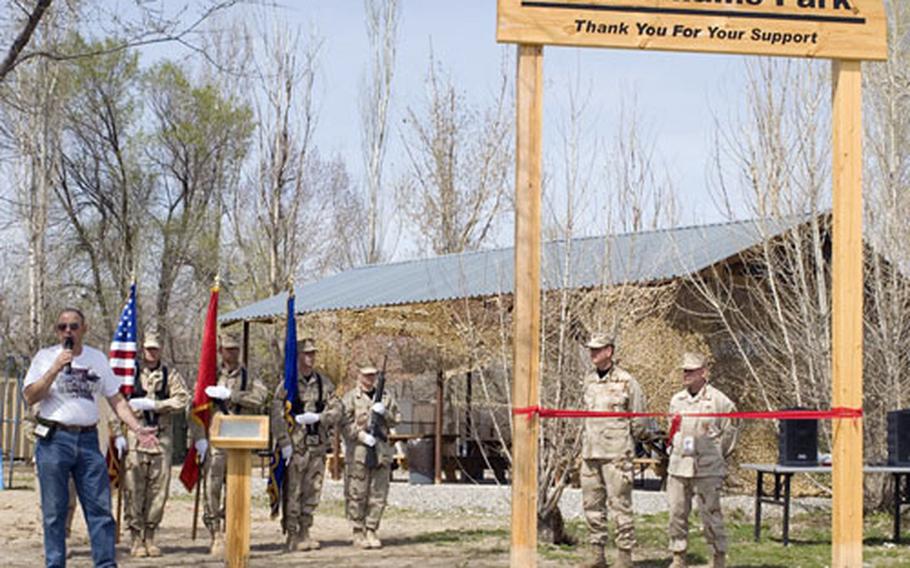 Bob Williams, left, speaks during a visit to the Bob Williams Park on Manas Air Base in Kyrgyzstan. (Photo courtesy of Bob Williams)

The holiday season is over, but Bob Williams keeps on giving.

Coffee, cigars, hand-warmers, spotlights, chips, dip, Beanie Babies, switchblades, DVDs, squirt guns, red dot scopes, flannel pajamas, 24-inch TVs and millions of pens &#8212; Williams has gotten them all into to his Florida warehouse and mailed them out to military bases in Iraq, Afghanistan, Kyrgyzstan and Qatar.

Guys like a sergeant major at a camp training Afghan Army recruits in Khowst, Afghanistan, with 165 troops living in spartan conditions.

&#8220;We are located 17 kilometers west of [Forward Operating Base] Salerno,&#8221; the soldier wrote Williams in a thank you e-mail.

His sons now handle the two successful businesses he once owned so he spends his time working for the troops. He sends about 215 boxes of stuff each week to some 200 combat-zone bases from his warehouse near Tampa.

He arrives at the warehouse at 3 a.m. most days to start reading his e-mails.

Who needs what? Who&#8217;s received what? Hand-warmers sent to the Bagram Air Base hospital were put where? (On the porta-potty seats.)

His correspondent replied that grass had been put in at the local Kyrgyzstan orphanage.

Manas has received so much from Williams in the past few years that a base park was named after him. &#8220;If there&#8217;s anything we need in particular, if it&#8217;s within his power, he&#8217;ll send it,&#8221; said Chief Master Sgt. Phil Cherry, formerly command chief for the 376th Expeditionary Wing at Manas.

Cherry said that Williams has sent scores of baseball bats and gloves, several sets of golf clubs, a variety of games, grips to put on the soles of boots, tons of Starbucks coffee and an unending supply of popcorn and other snacks.

But while on a trip to the base last March &#8212; Williams flew commercially &#8212; he found it short of items he deemed essential.

During a base tour, he noticed the perimeter lacked spotlights. When he asked where they were, he says he was told there were none.

He&#8217;s also sent red dot scopes, flashlights and knives. Does he ever think that the military should be providing these items?

How much of his own money he&#8217;s spent is unclear. Williams credits numerous businesses, such as Starbucks and Bic, for continuous product contributions, and others who send monthly checks made out to the U.S. Postmaster to help defray the cost of some $8,000 a month in postage. Troops at some bases have saved the pogs they receive as change from Army and Air Force Exchange Service outlets, and used them to cover checks to help with expenses.

Reading e-mails provides Williams with great satisfaction, especially ones that say his gifts, such as pens or stuffed animals, have been given to children who then became good intelligence sources. One soldier told him that an Iraqi girl who received a Beanie Baby later kept Marines from driving over a roadside bomb.

In the meantime, Williams can be contacted at sift@aol.com by anyone who wants to make a donation, or has a special wish.