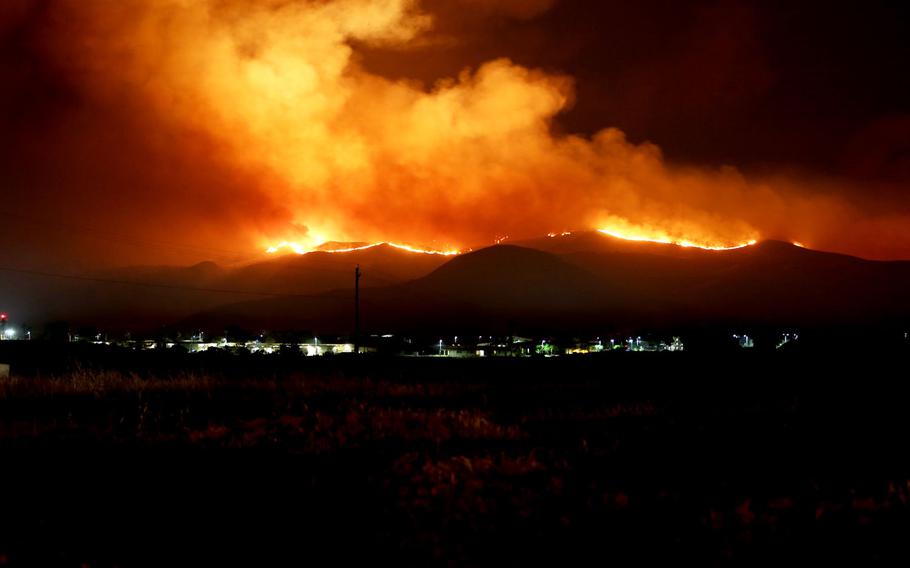 The Tomahawk wildfire burns through the night near Marine Corps Base Camp Pendleton, Calif., May 15, 2014. More than half of 3,500 Defense Department properties experienced climate-related damage in 2014-15, according to a DOD survey sent to Congress Friday. (Joshua Murray/U.S. Marine Corps photo)

The Tomahawk wildfire burns through the night near Marine Corps Base Camp Pendleton, Calif., May 15, 2014. More than half of 3,500 Defense Department properties experienced climate-related damage in 2014-15, according to a DOD survey sent to Congress Friday. (Joshua Murray/U.S. Marine Corps photo) 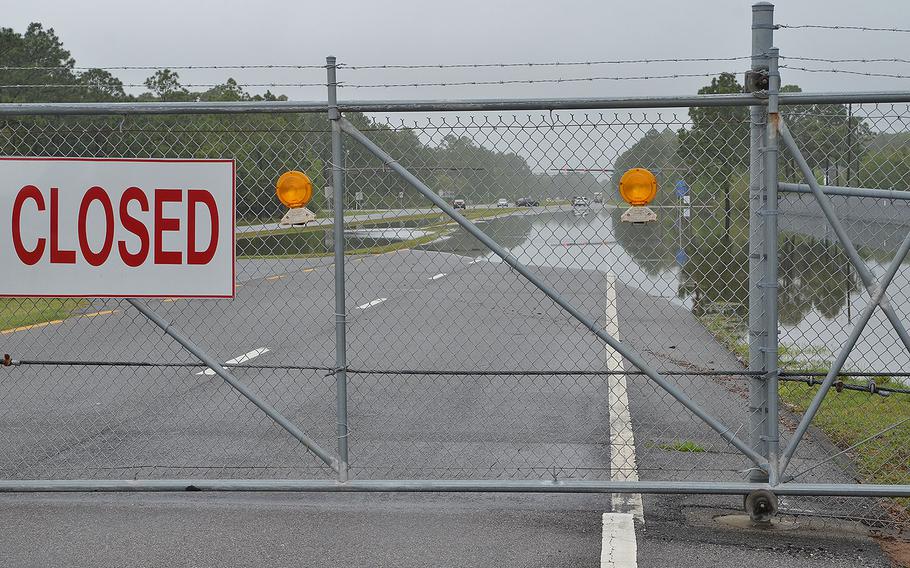 The west gate to Naval Air Station Pensacola is closed due to flooding from a storm starting April 29, 2014. Many areas of the base were inaccessible with water measured in excess of 3.5 feet in low lying areas. (U.S. Navy) 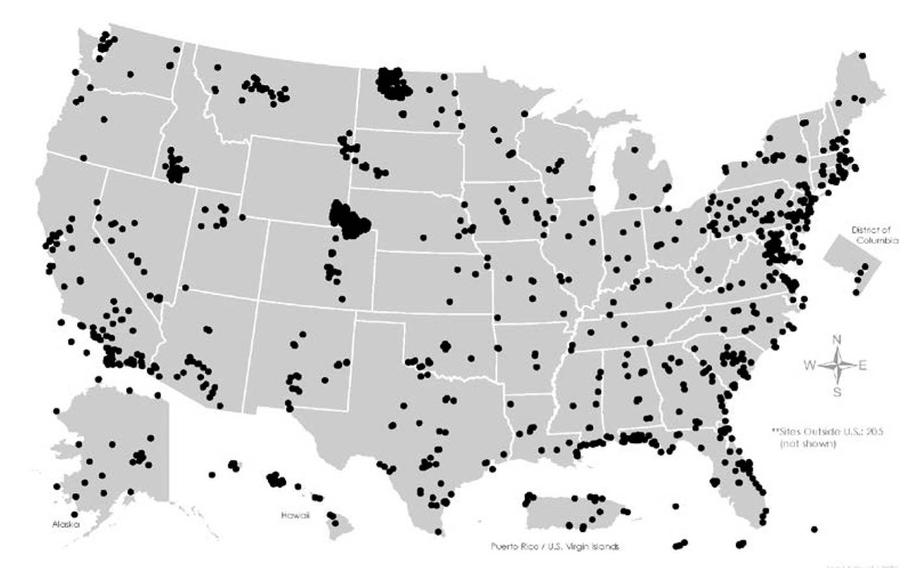 This map shows Defense Department sites that experienced climate-related damage, such as flooding, drought and wildfires, during 2014-15. (Courtesy of DOD)

More than half of 3,500 Defense Department properties experienced climate-related damage in 2014-15, according to a DOD survey sent to Congress Friday.

This first-ever comprehensive site survey of climate vulnerabilities focused on the negative effects that severe weather — including storm-surge flooding, extreme temperatures, wind and drought — had on those properties.

Prepared by the Office of the Under Secretary of Defense for Acquisition, Technology and Logistics, the survey, which includes events beginning in September 2014, found that drought had the broadest impact, with 782 properties reporting damage.

Closely following were 763 sites with wind damage and 706 sites reporting flooding that was unrelated to storm surge.

Just under half the surveyed sites — 1,684 — reported no effects.

Among the site types reporting one or more climate effects were airfield operations, wastewater systems and training ranges.

“As I look at the conclusions here, it’s important to recognize the breadth of the installation enterprise that’s affected by some climate factor,” said John Conger, a senior policy adviser with the Center for Climate and Security, a Washington, D.C.-based think tank. “Even if you’re not on the coast, you’re still going to be affected. It demonstrates the breadth of the impact, if not the severity.”

The survey was initiated while Conger was the acting assistant secretary of defense for energy, installations and environment, a position he left in late 2015.

“We were trying to get a sense of the vulnerability of our installations across the enterprise, not necessarily anecdotally, but comprehensively. Who was being impacted by various climate factors? This particular report doesn’t measure changes over time so it’s not as much climate change as climate impact,” Conger said.

The survey does not offer cost estimates to fix the vulnerabilities it found.

Rapid climate change is projected to exacerbate flooding, drought and wildfires, and “the reasonable expectation is that vulnerabilities to military sites will increase unless significant resources are devoted to adapting DOD assets to this changing operational environment, and/or the rate and scale of climate change is reduced,” the Center for Climate and Security said in a statement Monday.

Conger said he was encouraged that the White House sent the survey’s results to Congress.

“This administration, which has an enunciated skepticism toward climate change, clearly accepted the findings enough to send this out to Congress,” he said. “I think that acknowledgement is important.”

The 2018 National Defense Authorization Act requires a report by the end of this year identifying the military installations most vulnerable to negative climate change effects and how they might be mitigated.

The survey sent recently to Congress will be key in that assessment, Conger said.