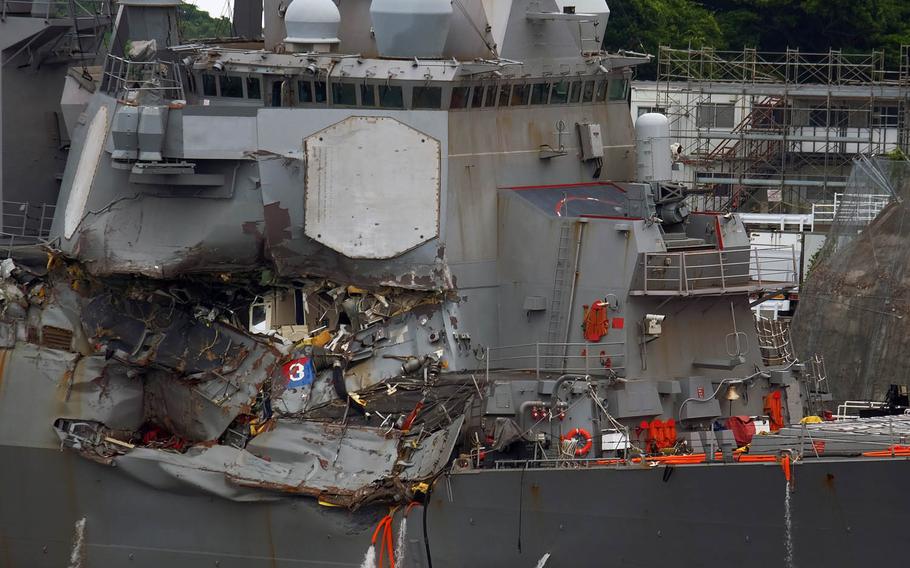 The Navy destroyer USS Fitzgerald, which was involved in an early Saturday collision with a merchant ship, is seen at Yokosuka Naval Base, Japan, Sunday, June 17, 2017. (Tyler Hlavac/Stars and Stripes)

The Navy destroyer USS Fitzgerald, which was involved in an early Saturday collision with a merchant ship, is seen at Yokosuka Naval Base, Japan, Sunday, June 17, 2017. (Tyler Hlavac/Stars and Stripes) 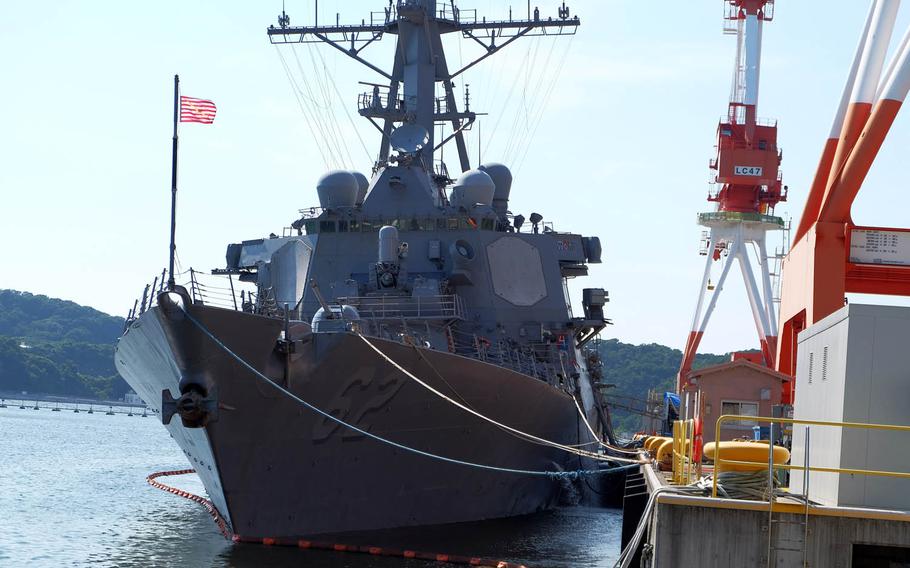 Water can be seen draining from the USS Fitzgerald as it sits in port at Yokosuka Naval Base, Japan, Monday, June 19, 2017. Flooding and weak bulkheads remain a concern for damage responders. (Tyler Hlavac/Stars and Stripes)

YOKOSUKA NAVAL BASE, Japan — Sailors from multiple ships across 7th Fleet are volunteering to assist the USS Fitzgerald’s crew with damage-response efforts in the aftermath of a fatal collision off the coast of Japan.

The incident between the destroyer and the Philippine-flagged ACX Crystal merchant ship happened about 2:20 a.m. Saturday, about 64 miles southwest of Yokosuka near the Izu Peninsula.

“As far as damage … I think this was greater damage compared to the USS Cole,” said Damage Controlman Chief Andrae Sutherland, who participated in emergency response efforts after the October 2000 bombing that killed 17 Americans and injured 39.

Seven sailors died and three were hurt in Saturday’s collision.

“The commanding officer’s stateroom was obliterated,” Sutherland said of the Fitzgerald. “I don’t know how he survived that. He’s a lucky man. Seeing the berthing and the multiple spaces that were flooded out … [the damage] was definitely greater than the USS Cole.”

During a Sunday press conference at Yokosuka, 7th Fleet Commander Vice Adm. Joseph Aucoin said the Fitzgerald experienced “extensive damage and flooding” after being struck by the ACX Crystal which, at 29,060 tons, is nearly four times the weight of the Navy ship.

“The damage included a significant impact under the ship's pilothouse on the starboard side and a large puncture below the ship's waterline, opening the hull to the sea,” Aucoin told reporters gathered near the damaged ship. “The ship suffered severe damage, rapidly flooding three large compartments that included one machinery room and two berthing areas for 116 crew.”

Although the Fitzgerald is back at port and no longer at critical risk, the destroyer still requires stabilization work and around-the-clock observation, said Sutherland, who is one of the lead damage controlmen working to stabilize the ship. Flooding remains a significant concern for the Fitzgerald, he said.

“We’re currently waiting on the divers to [complete welding work] on the hole that was sustained. That’s our primary,” he said. “Once we get that in place we can continue dewatering the auxiliary spaces and our berthing spaces.”

Damage to the ship’s bulkheads is another concern, Sutherland said.

“Based on the hit we received, some of the bulkheads are kind of weak,” he said. “We’re taking extra precaution to reinforce those bulkheads so we can save the ship and equipment.”

Primary response efforts are being led by damage controlmen and hull technicians from ships across the 7th Fleet, including the USS Curtis Wilbur; USS Benfold; USS Antietam; USS Chancellorsville; and USS Blue Ridge. They are volunteering to give the Fitzgerald’s crew time to recover from the tragedy of losing seven comrades.

“A lot of the [damage controlmen], [hull technicians] and [machinery repairmen] aboard the Blue Ridge have been volunteering because we’re known as the experts in this field, so we want to help out as much as we can,” said Petty Officer 2nd Class Tayler Dunn, a hull maintenance technician from the Blue Ridge.

Sailors have volunteered to assist in other ways, including monitoring flooded spaces, standing watch, and running messages because the Fitzgerald’s internal communications system is damaged.

Despite working extra hours on a ship that is not his own, Sutherland says he doesn’t worry about the work shifts, which sometimes run up to 16 hours. He said he stays focused on assisting the Fitzgerald crew.

“Our goal is to make sure the crew of the USS Fitzgerald gets enough time to do what they need to do … take care of their families,” he said. “We’ll stand this watch for however as long as they need. A week, two weeks, a month … we got the watch until they are ready to come back on board.”