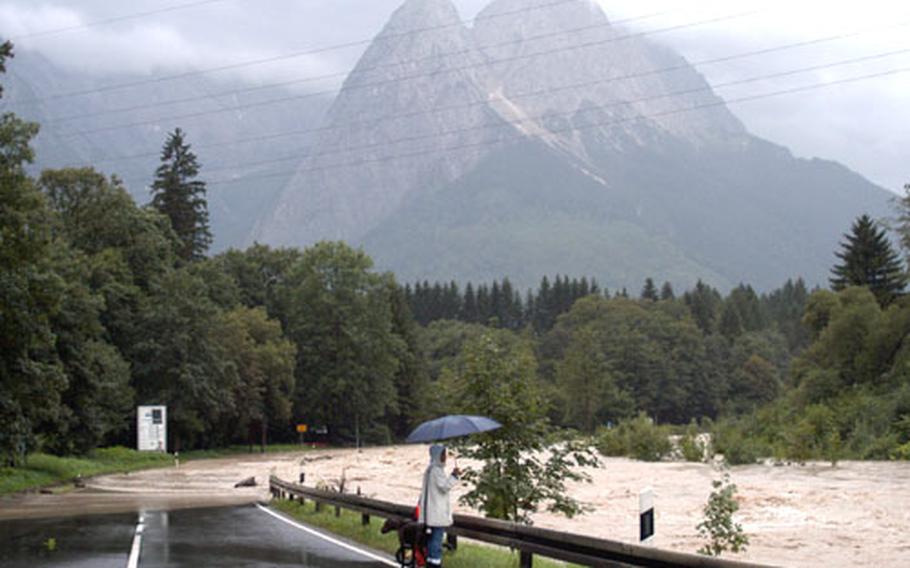 The Loisach River floods Zugspitzstrasse within a few hundred yards of the Edelweiss Lodge and Resort. (Special to S&S)

A record rainfall in Garmisch, Germany, caused rivers to overflow and roads to close Tuesday in the Bavarian Alps community that is home to about 2,600 U.S. servicemembers, Defense Department civilians, family members and retirees.

Guests who had already checked out were rebooked into their rooms, and hotel officials were trying to contact patrons who were trying to check in Tuesday to stop them from coming, according to a hotel news release.

The hotel staff showed movies and came up with other activities to keep guests entertained, the release stated.

In addition, the George C. Marshall European Center for Security Studies closed at midday, and many people who were tending to their own flooding problems at home were unable to make it to work at the U.S. facilities.

Five inches of rain fell on Garmisch in the 24 hours that ended at 11 a.m. Tuesday, the most in Garmisch since records began being kept in 1949, according to Maj. Steve Callis of the U.S. Air Forces in Europe Operational Weather Squadron at Sembach Annex, Germany.

Rainfall in Garmisch is approaching 10 inches for the month of August, according to Harald Strauss, one of the squadron&#8217;s climatologists.

Strauss said that the small streams that run down from the Alps run off into small rivers such as the Loisach and Kanker, which both run near Garmisch and overflowed on Tuesday.

An officer who answered the phone at Garmisch&#8217;s police station said, &#8220;Garmisch is an island now,&#8221; when asked what it was like. The officer, who said his last name was Boehm but declined to give his first name, said that no injuries or deaths had been reported as of midafternoon on Tuesday.

The man said the main road leading through town running north to Munich and south into Austria was closed.

Ron Elliott, a Marshall Center spokesman, said he noticed something was wrong on Monday night.

&#8220;Once I got in at about [9 p.m.], the sirens started going off in reference to the water. I saw the farmers and the tractors taking off and going down the roads. I don&#8217;t know if they were going out to their farms for levee bracing or what.&#8221;

Elliott said police on Tuesday had set up routes for people to use to go home, and that in some places people had to drive on the sidewalks because of water in the streets.

Elliott said the Marshall Center, which conducts courses for military, security and diplomatic personnel from various countries, said no major courses were under way this week, and that most of the center&#8217;s 300 employees were excused from work.

The exchange stores and commissary at Artillery Kaserne, the military community&#8217;s main shopping area, opened and closed as usual, according to Gregory Holzinger, director of Area Support Team Garmisch. But many of them operated with skeleton crews.