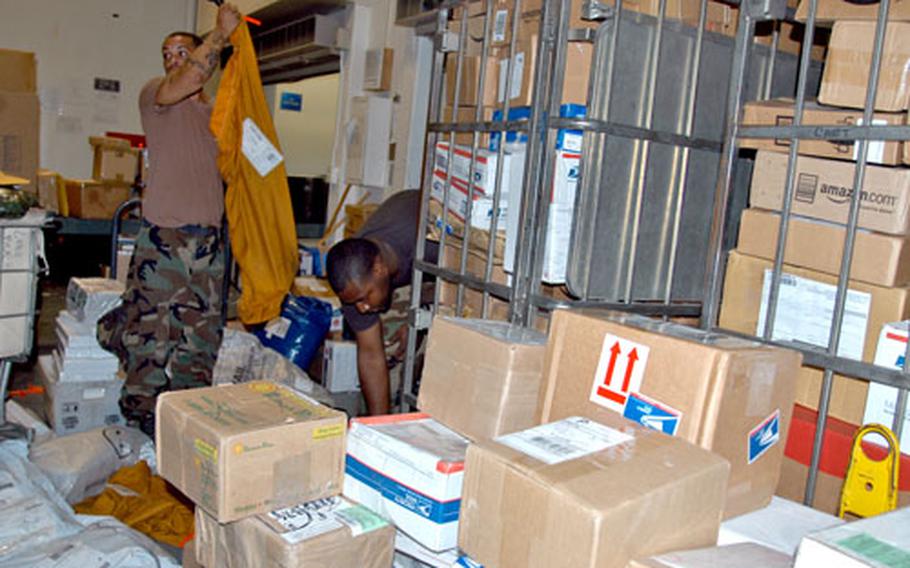 Airman 1st Class Michael Wood, left, and Staff Sgt. Mario Brown, help sort mail, including boxes and packages, at the Misawa Air Base, Japan, post office Wednesday. The post office has been inundated with boxes lately and is in need of volunteers. (Jennifer H. Svan / S&S)

Airman 1st Class Michael Wood, left, and Staff Sgt. Mario Brown, help sort mail, including boxes and packages, at the Misawa Air Base, Japan, post office Wednesday. The post office has been inundated with boxes lately and is in need of volunteers. (Jennifer H. Svan / S&S) 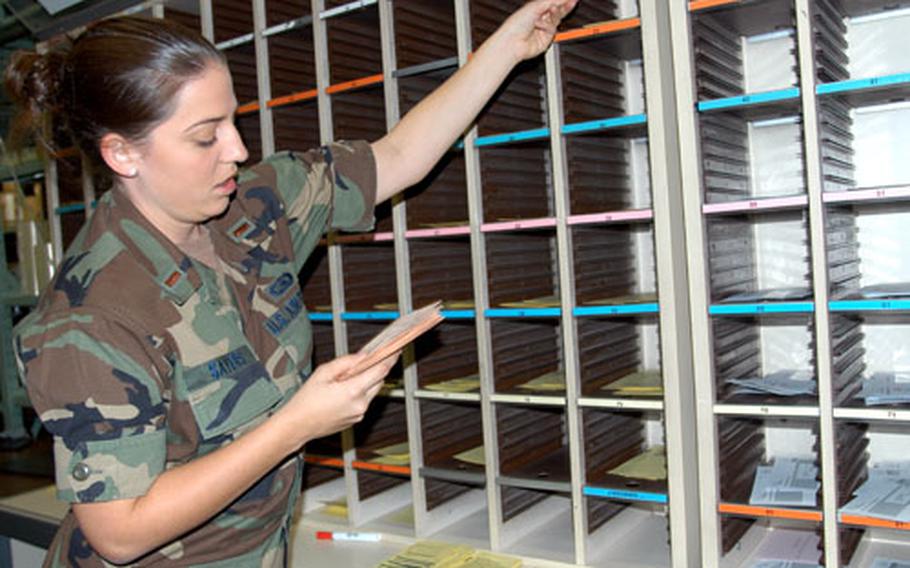 2nd Lt. Jennifer Sayers of the 35th Communications Squadron used her afternoons this past week to volunteer at the Misawa Air Base, Japan, post office. (Jennifer H. Svan / S&S)

But it&#8217;s not mistletoe that has postal workers making comparisons to the holidays, while they plead for volunteers to pitch in.

The post office has been slammed with an influx of boxes in recent weeks as hundreds of Misawa airmen in Iraq prepared to come home.

In recent days, the post office has received from 380 to 600 packages per day, postal officials said. In September, incoming mail topped the monthly average by 7,000 pounds, they said.

Post Master Garrick Wimbush, a master sergeant who&#8217;s been at Misawa for two years, said a lot of the incoming boxes were mailed through the military postal system from deployed airmen.

Hundreds of the bulky storage trunks compete for space in a crowded parcel room with packages from Amazon.com, Pampered Chef and family members in the States.

The post office extended its parcel pick-up window by two hours in the morning this week and will likely open Sunday so airmen expected to return from the desert Thursday and Friday can pick up their foot lockers, Wimbush said.

The Misawa post office processes most mail the same day, Goldman said. All mail must be processed within 24 hours of arrival, according to U.S. Postal Service standards, he added.

So far, there have been no delays in getting yellow cards in people&#8217;s post office boxes, letting them know they have a package, Wimbush and Goldman said.

Due to a steady deployment rotation of postal staff, manning is about half of what it usually is, Wimbush said. Volunteers from various squadrons are pitching in, but more are needed, he said.