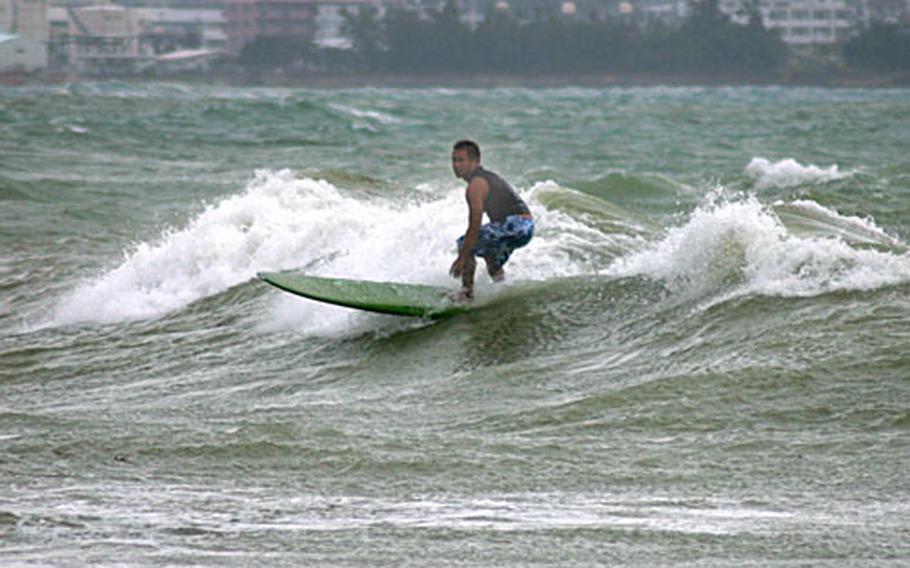 Surf&#39;s up for a local who takes advantage of the waves generated Friday afternoon by the approaching Typhoon Nari at a beach off Route 75 near Camp Courtney, Okinawa. (Cindy Fisher / S&S)

U.S. bases on Okinawa entered Tropical Cyclone Condition Readiness-1C (caution) at 7:30 p.m. Friday, even as the storm shifted south and appeared as if it would pass near Okinawa to the southwest. Department of Defense Dependents Schools were closed on Friday at 10 a.m., and students were bused home.

The Joint Typhoon Warning Center forecast called for Nari to pass 52 miles southwest of Okinawa at midnight Friday with the strongest winds of 69 mph to hit the island about 2 a.m. Saturday.

Forecasts from the 18th Wing Weather Flight called for U.S. bases on Okinawa to experience winds of 58 mph and greater from midnight to 6 a.m. on Saturday. After passing Okinawa, Nari is forecast to track north, then northeast through the Tsushima Strait between South Korea and Kyushu Island and southwestern Honshu Island in Japan.