Flight line ground liaison gets troops off to Iraq with professionalism, precision 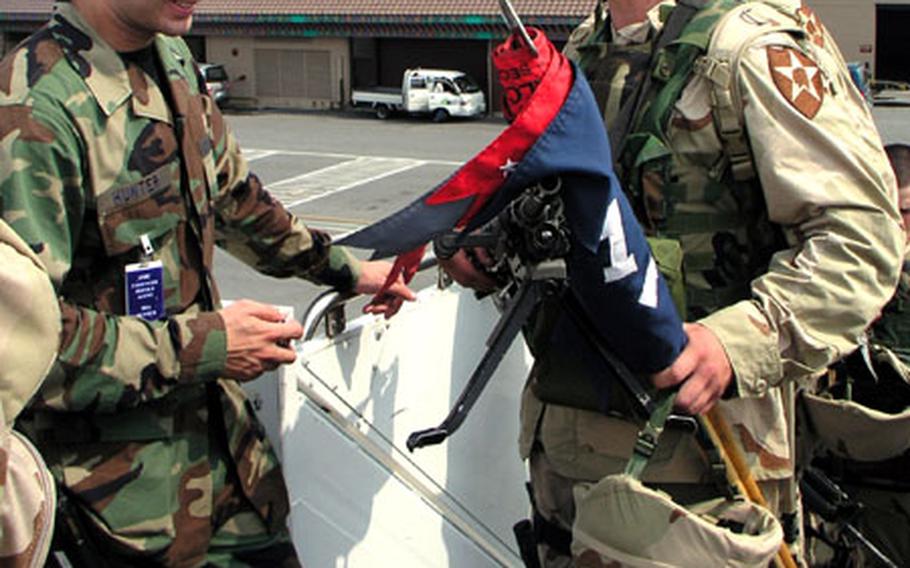 On Wednesday at Osan Air Base, South Korea, Sr. Airman Jeffery Hunter, at left, shares a light moment with a soldier of the Army&#39;s 2nd Infantry Division while taking a headcount as troops board a plane for Kuwait. Hunter is working as an Air Force ground liaison with the troops as they pass through Osan. (Franklin Fisher / S&S)

OSAN AIR BASE, South Korea &#8212; With a glaring sun beating on Osan&#8217;s flight line, the troops in heavy gear form a long single line. When the band strikes up a sprightly march, the first of them steps off toward the waiting aircraft.

At the head of the boarding stairs stand several airmen, including one who holds a small silver-colored device he&#8217;ll use to count each soldier entering the jetliner that will take the troops to Kuwait for eventual deployment to Iraq.

The brigade, known as the Strikeforce, is flying first to Kuwait aboard a weeklong series of flights leaving from this, the biggest air base in South Korea.

Hunter, with Osan&#8217;s 731st Air Mobility Squadron, is there in his role as an Air Force ground liaison, one of two airmen who&#8217;ve drawn that assignment for the Strikeforce airlift operation. He&#8217;s worked as a passenger service agent for most of his almost three years in the Air Force.

His job during the airlift is to meet the busloads of arriving troops as they pull in a few hours before their flight, get them to a waiting area, take the all-important passenger roll-call &#8212; the manifest call &#8212; then go with the buses to the flight line.

As soon as the buses roll in, Hunter and other airmen will make contact with the soldier assigned as &#8220;troop commander&#8221; for the trip and will give the troops on the buses a brief rundown of flight line and safety rules.

And he&#8217;ll invite them to approach any time with any questions they may have.

And at roll-call time, he&#8217;ll walk into the big air-conditioned tent where the Red Cross canteen has been set up and in a voice loud enough to be heard, but with no hint of a power trip, he&#8217;ll get them ready for manifest call.

Good people skills are crucial to working with passengers, he said.

To botch the manifest call is to risk delaying the aircraft.

Manifest calls have been running about 30 minutes for the Strikeforce flights. Hunter holds the manifest in his hands and calls out each soldier&#8217;s name, arranged alphabetically.

As he watched the faces of a Strikeforce infantry unit Wednesday, Hunter said, he was struck by how many appeared calm and unafraid about what might await in Iraq.

Were he to look back on it years later, Hunter said, he thinks he knows what he&#8217;ll remember most about the Strikeforce deployment in which he&#8217;s playing a part.

It&#8217;ll be not their departure so much as their return.