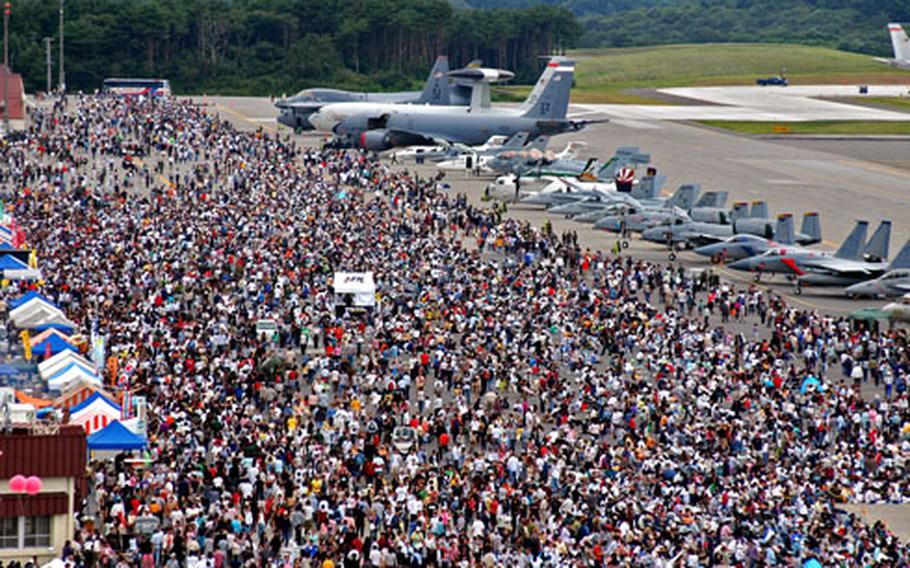 The Misawa Air Festival on Sunday drew an estimated 150,000 people. A joint effort by the U.S. and Japanese military at Misawa, the show featured more than 40 aircraft on display, flying demonstrations and acrobatics, and numerous U.S. and Japanese booths selling food and military memorabilia. For more photos, see the festival . (Jennifer H. Svan / S&S)

MISAWA AIR BASE, Japan &#8212; By noon Sunday on Taxiway A, site of the Misawa Air Festival, it was impossible to walk two feet in any direction without bumping into someone.

They were in Japan for the first time to watch their son, Capt. Chris Schneider, Pacific Air Forces&#8217; new demonstration pilot, smoke through the sky at Mach speeds during the F-16 show.

About an hour before his demonstration, Chris Schneider also admitted to being a bit jittery.

If the hometown crowd wanted to see planes, the festival didn&#8217;t disappoint. The skies roared throughout the day and the taxiway was a veritable museum of some of the most high-tech and fiercest fighter and attack aircraft in the world. In addition to 20 Japanese military aircraft, 24 U.S. military aircraft from Pacific bases were on static display, including a B-1B Lancer, marking the bomber&#8217;s maiden voyage to Japan, according to its crewmembers.

&#8220;It&#8217;s great to be over here,&#8221; said aircraft commander Capt. Joseph Sheffield, noting the B-1&#8217;s four-man crew spent the morning signing autographs and answering questions about their plane. Based at Ellsworth Air Force Base, S.D., the B-1 is part of a contingent temporarily deployed to Andersen Air Force Base, Guam.

Other U.S. aircraft on the tarmac included an A-10 Warthog from Osan Air Base, South Korea; EA-6 Prowler; E-3 airborne warning and control system aircraft from Kadena Air Base, Okinawa; and F/A-18 Super Hornets.

Airman Russell Ross, a Patrol Squadron (VP) 40 sailor, said the A-10 was the coolest plane in the mix.

The festival is a joint effort by the U.S. Air Force and Japan Air Self-Defense Force, which share Misawa Air Base.

&#8220;We could not have done this without one another,&#8221; said Capt. Jeremy Huffaker, 610th Air Control Flight director of operations and this year&#8217;s festival coordinator.

Huffaker said this year&#8217;s turnout seemed to be higher than last year and he was pleased that the rain held off for most of the day. No demonstrations were canceled, though pilots did perform their &#8220;low show&#8221; maneuvers due to shallow cloud cover.

The festival featured numerous U.S. and Japanese food and military memorabilia booths, selling everything from yakisoba and homemade cakes to squadron T-shirts and patches. &#8220;It&#8217;s awesome,&#8221; said F-16 pilot 1st Lt. Patrick Pearson of business, as he doled out hot dogs at the 14th Fighter Squadron tent. The squadron said they sold more than 300 each of hamburgers and hot dogs.

More than 300 servicemembers volunteered to work behind the scenes, taking charge of security, crowd control, trash detail, medical tents and other duties.