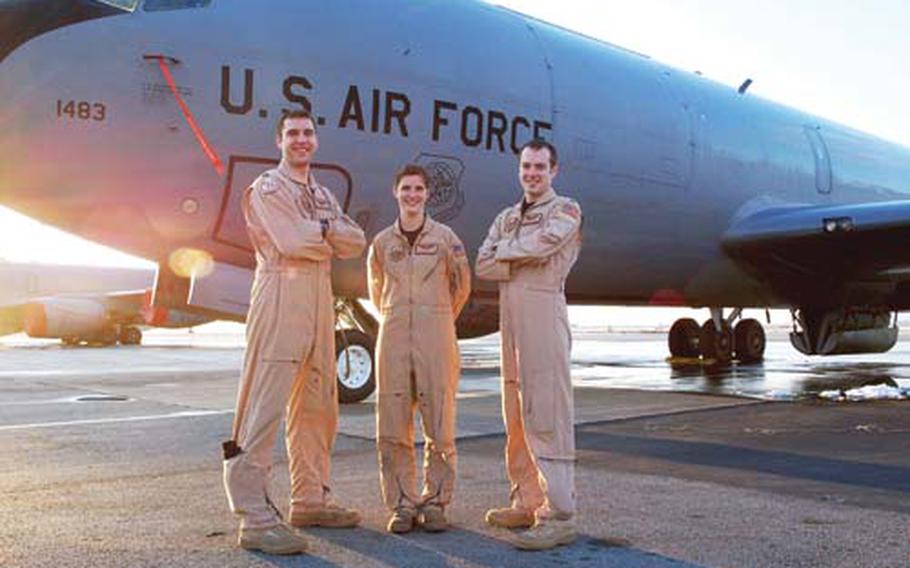 Capt. Matthew Jaeger, left, Senior Airman Mckayla Dick, center, and 1st Lt. Vance Feavel stand by the KC-135 Stratotanker they safely landed after a malfunction using GPS. They were on a refueling mission earlier this month from Manas Air Base, Kyrgyzstan. (Phyllis Hanson/Courtesy of the U.S. Air Force)

An Air Force flight crew is being lauded for quick thinking that helped it through an in-flight incident that ended with an emergency landing in Afghanistan.

According to U.S. military officials, the crew of a KC-135 Stratotanker was flying a refueling mission somewhere over the border of Kyrgyzstan and Tajikistan on Mar. 16 when the aircraft lost all electronic navigation systems.

Dense cloud cover below them made it impossible for crewmembers to use geographic landmarks to find their way back to Manas Air Base, from which they had taken off. Even if they could find Manas, dense clouds and rain made a visual landing impossible.

So instead, Capt. Matthew Jaeger and the crew of Shell 73, as the craft is known, had to improvise.

"We were trying to diagnose the problem the entire time, going through our checklists, but nothing we did was solving it," Jaeger was quoted as saying in a Air Force news release.

Jaeger sent out a mayday call, then turned to a unique solution: a handheld GPS device.

Jaeger decided to fly the aircraft south toward Afghanistan &#8212; he knew from the mission brief that the weather there was much better than at Manas, and he knew he had enough fuel to make the flight.

"We had to land at a field where we could use visual flight rules, one where we could see the runway and manually input our landing data," he was quoted as saying.

They would use the device to navigate south, staying out of Chinese and Iranian airspace.

Jaeger, who has two years of experience as an Air Force pilot, was praised for his quick thinking.

"In my experience, something like this has never happened before," Lt. Col. Patrick Rhatigan, commander of the 22nd Expeditionary Air Refueling Squadron and an 18 year flight veteran, was quoted as saying. "For him to pull out the handheld GPS shows a level of maturity and quick thinking not usually seen in junior aircraft commanders."

Once near the Afghan border, the flight crew called ground controllers for support.

"For about five minutes it was pretty tense, but once I knew we were on a vector south toward Afghanistan, that&#8217;s when it started to calm down," said 1st Lt. Vance Feavel, the Shell 73 co-pilot.

The crew sent out a mayday to Kabul air control, and a C-17 Globemaster was sent to rendezvous with Shell 73 and help guide it to Bagram. The C-17 crew led the other aircraft into a holding pattern, then guided it through a hole in cloud cover and into a visual landing approach.

Shell 73 landed, had the navigation systems fixed and flew back home to Manas.

The flight crew of Shell 73 is deployed from the 92nd Air Refueling Squadron at Fairchild Air Force Base, Wash., officials said.

"I&#8217;m really proud of how both crews teamed up, relied on their training, and pulled the rabbit out of the hat to keep us off the front page news," Rhatigan said.