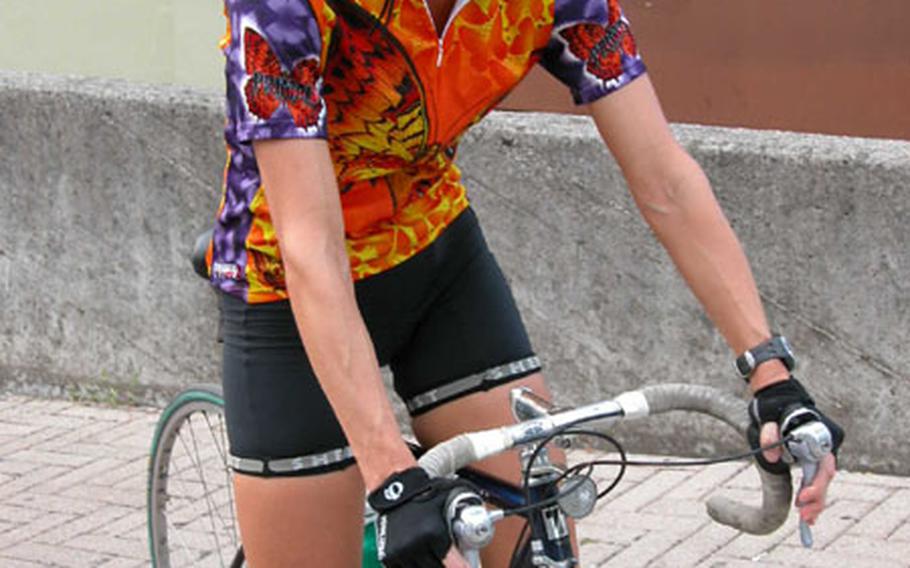 Maj. Tamara Parsons gets ready for a ride as part of her training for the Ironman Triathlon, which will be contested Oct. 18 in Hawaii. Parsons is flight commander for the 31st Operations Support — Weather at Aviano Air Base, Italy. (Charlie Coon / S&S)

AVIANO AIR BASE, Italy &#8212; Maj. Tamara Parsons is searching for the limit to her endurance.

Parsons is training for something hard &#8212; to finish the Ironman Triathlon. She was picked in a lottery to compete in this year&#8217;s race, which will be Oct. 18 in Hawaii.

TV viewers might recall the 1982 Ironman, when the event became world famous.

Julie Moss, a 24-year-old college student, cramped and fell just yards from the finish. Moss dragged herself the rest of the way, her hand reaching for the finish line on the pavement. ABC sportscaster Jim McKay groped for words to describe the moment.

So why is Parsons pushing herself?

Things started badly for Parsons when she arrived in Aviano five weeks ago. The box containing her bicycle and all her training gear was lost &#8212; or stolen &#8212; in transit.

But her luck turned.

She met a woman who loaned her a bike for a week.

Three weeks ago a bike shop in nearby Barcis, Italy, outfitted her with a loaner so she could compete in the Barcis Triathlon, a shorter version of the Ironman.

In her day job, Parsons forecasts the weather, an important duty at any Air Force base.

A lightning forecast, she said, can bring refueling to a halt. Strong winds can force F-16s into their hangars and sensitive equipment to be battened down. Heat can make a fighter pilot dizzy. Hail batters anything it strikes.

Supporting the 31st Fighter Wing through weather forecasting is her squadron&#8217;s mission, but forecasting is not precise, Parsons said, even with today&#8217;s technology.

Despite her love for weather and exercising outdoors, Parsons manages to keep sane sitting behind her desk.

She trains six days a week. One day might include a short swim and long run, the next a bike ride to stretch out her legs. Her workday starts early, so she trains in late afternoon.

Parsons was happy to share her story with Stars and Stripes readers.

The Ironman distances that inspire Parsons are not completely foreign to her.

Parsons, who is 5-foot-5 and weighs 115 pounds, said she is concerned how Hawaii&#8217;s October heat will affect her.

Parsons used to live there &#8212; halfway around the world in Hawaii &#8212; before being transferred to Aviano.