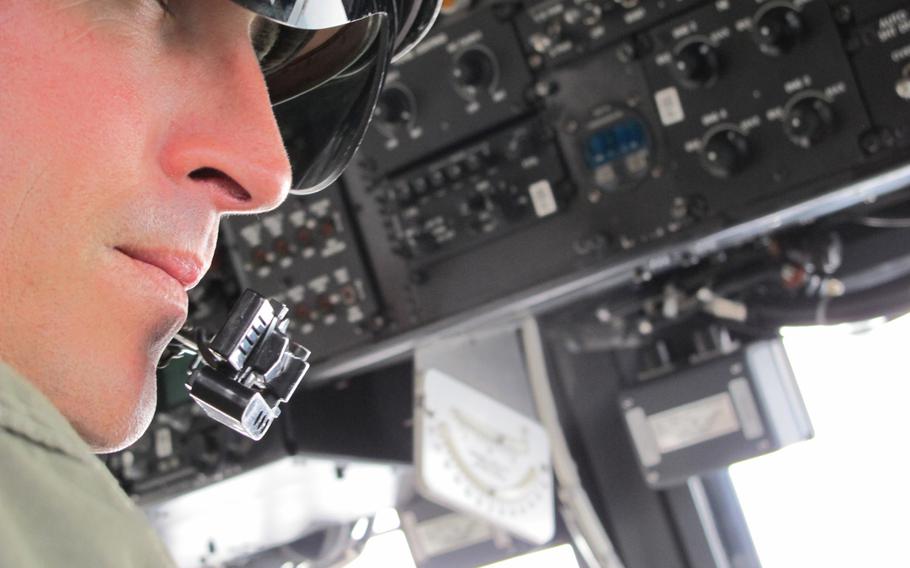 Buy Photo
Petty Officer 1st Class Louis Deforest, the engineer of Naval Beach Unit 7's Landing Craft Air Cushion 8 looks out to sea from the cockpit on a mid-May training run out of Sasebo Naval Base. The unit was stood up in August and is operating out of a brand new $285 million facility dedicated in March. (Matthew M. Burke/Stars and Stripes)

SASEBO NAVAL BASE, Japan — Defending territory and allies in the Pacific largely comes down to the ability to strike quickly from the sea, control a beachhead and secure it with troops and equipment.

One of the U.S. military’s main weapons in that mission is the Landing Craft Air Cushion, a hovercraft that can travel across 70 percent of the world’s beaches compared to conventional craft’s 20 percent, and can hit a beach at upwards of 46 miles-per-hour with a full load of Marines, tanks and light armored vehicles. LCACs are also integral to humanitarian operations where ports and piers are damaged or blocked.

Air cushion operations in the Pacific became a little more potent recently after several tenant commands at Sasebo Naval Base - the only base outside the U.S. where LCACs are deployed - were consolidated to form Naval Beach Unit 7 and a new state-of-the-art $285 million LCAC facility opened in March. The facility was built with expanded operations in mind although the Navy hasn’t changed NBU-7’s operational tempo.

“As far as naval elements of the Amphibious Ready Group go, NBU-7 is the tip of the spear,” said NBU-7’s executive officer Cmdr. Christopher Roberto. “The new facility opens up a whole host of possibilities.”

Work on the new facility began in 2004, funded by the Japanese government, Navy officials said. At that time, Assault Craft Unit 5 Sasebo Detachment’s six LCACs had been operating for about 10 years out of Sakibe Laydown Station, located in a residential area about three miles south and slightly east of Sasebo. The facility was not designed for LCACs and besides being short on space and amenities, operations were limited by noise complaints from nearby residents.

In the years that followed, the fleet of air cushions in Sasebo doubled to coincide with the U.S. military’s Pacific shift. As the situation at Sakibe became untenable for both the U.S. Navy and local residents alike, the new facility, dubbed Fleet Activities Sasebo Yokose, opened, giving NBU-7 a facility dedicated to their needs, complete with one-of-a-kind hush houses, a huge concrete apron that facilitates LCAC parking and the collection of rainwater to wash the crafts, office and storage space, maintenance shops and other facilities.

The good news for local residents is that the LCACs’ new home is literally in the middle of nowhere, located amidst farm plots and citrus trees, 20 miles south of main base, across the bay in nearby Saikai city. City officials said that the crafts are still noisy, but complaints have evaporated.

“There are no people living in Japan’s southwestern islands, including Senkaku, and if China takes over the islands, Japan does not want them to create a fait accompli for a long time, so it will need to recapture the island. In that case, [Japan] could possibly ask for the U.S. military’s help.”

LCACs were used two years ago to move troops and equipment ashore following Japan’s massive earthquake and tsunami. They have also helped out in Haiti and Africa, and are often used in exercises with the Australians and South Koreans.

Shikata said LCACs could also come in handy when an expected earthquake hits along the Nankai Trough, a fault which runs through Shizuoka and eastern Kyushu in western Japan. Japanese government assessments have said that a 9.1 earthquake could kill about 320,000 people and injure another 630,000.

A LINK TO LAND

The LCAC was conceptualized in the early 1970s but wasn’t delivered to the Navy until 1984 – Bell Aerospace built the prototype -- with a total of 91 produced through 2001, according to Navy websites. The air cushions operate out of Camp Pendleton, Calif., Joint Expeditionary Base Little Creek-Fort Story, Va., and Sasebo.

They were only designed to last 20 years but have undergone a series of dramatic upgrades called the Service Life Extension Program that was designed to get them to 40 years.

On July 6, 2012, a contract was awarded to Textron, Inc. for the next-generation ship-to-shore connector.

The Sasebo-based NBU-7 is comprised of 215 sailors in operations, supply and maintenance, Roberto said. Some of these modern day descendants of D-Day’s landing craft drivers share the same jobs as those in the aviation community - the LCAC utilize the same ground support equipment as an airfield, for example.

Each LCAC is usually crewed by five sailors: a craftmaster who drives the boat, an engineer responsible for the operation and preventative and corrective maintenance of the engineering plant, a navigator who plots the course and monitors radar, a loadmaster who onloads and offloads Marines and their vehicles, and a deck engineer. The unit also features older, slower Landing Craft Utility boats that don’t hover, but can carry more to the beach and beach party teams, who facilitate the landing and movement of troops, casualties, equipment and supplies to and from the beach.

The LCAC can carry just over 200 Marines, one Abrams tank or four light armored vehicles, while the LCU can carry up to 400 Marines or up to three tanks, Roberto said. When an operation is planned, Navy officials will request a certain amount of NBU-7 crafts, LCACs and LCUs and beach party teams. They are driven into the well decks of the amphibious assault and dock landing ships in Sasebo and hitch a ride until they are needed.

LCACs wouldn’t be the first units ashore in a combat situation but they would immediately follow armored vehicles.

“The LCAC offers the blue-green team the ability to put significant quantities of vehicles and supplies across a beach in a very rapid manner,” said Lt. Col. John Lehane, operations officer for the 31st Marine Expeditionary Unit. “The LCAC provides a high-speed connector that allows the blue-green team to reinforce a beach possibly seized by assault amphibious vehicles carrying Marine Infantry.”

During a training run in May aboard NBU-7’s LCAC-8, the complexities of operating such an important craft were on full display. Chief Petty Officer Eric Crafton worked the reins like a drum kit, his feet manipulating rudder controls to keep the heading, his hands controlling the giant hovercraft’s propeller tilt and bow thrusters.

The Landing Craft Air Cushion rose as its black undercarriage inflated. Then it whizzed over the blue expanse of sea like an air hockey puck, past gawking fishermen and Japanese Maritime Self-Defense Force minesweepers.

The crew had to be extremely careful of obstacles, and the Louisiana native’s eyes constantly swiveled from radar and control panels to the water, looking for buoys and small boats. Their timing also had to be precise. When delivering Marines to the beach, too early, and they could be making the drop-off under bombardment; too late, and the enemy could find time to maneuver.

“This is a high-speed vehicle,” Crafton said. “You have to make quick decisions.”

The crew would complete the timed training mission with little fanfare, but their importance to amphibious operations and stability in the Pacific cannot be understated.

“The landing craft are vital to the Marine Expeditionary Unit’s mission because they are our only means of transporting heavy equipment and large numbers of supplies to shore in areas that do not have piers,” said Marine Capt. Benjamin Van Zytveld, a target information officer and operations planner for the 31st MEU out of Okinawa. “In the types of operations that the MEU conducts in often-austere environments, this capability is indispensable. ”