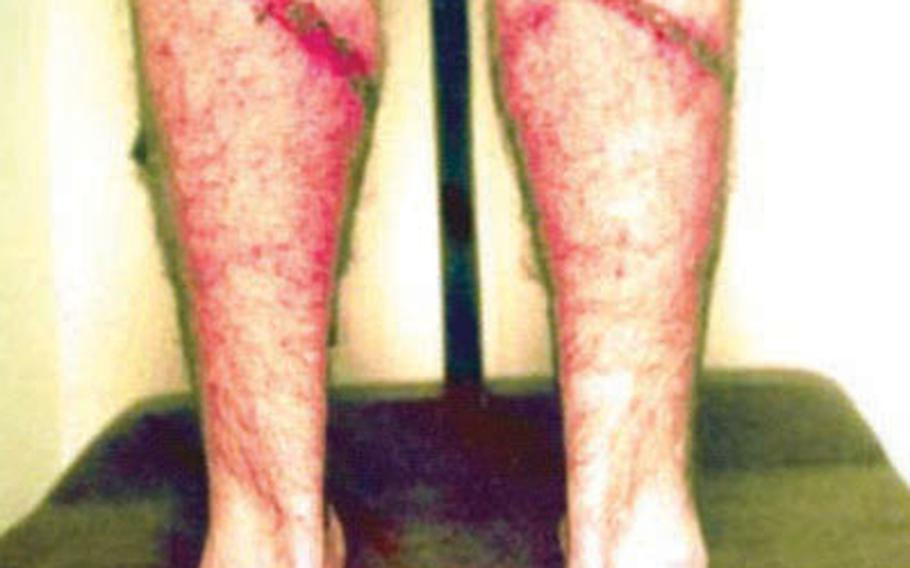 The Defense Department says using pet flea collars to combat the sand fleas servicemembers encounter in the desert will only cause problems, such as the chemical burns above. (Courtesy Armed Forces Pest Management Board)

ARLINGTON, Va. &#8212; Sitting in desert sand up to your eyeballs, sharing the fun with fleas? Here&#8217;s an important tip: No matter how bad the itch, do not strap on animal flea and tick collar to ward off the little buggers.

Anyone who has ever spent a sleepless and miserable night getting eaten alive by sand fleas can sympathize with a servicemember who assumes that what works for Fido and Fluffy will work for people.

Unfortunately, not only are the flea collars ineffective, they can actually be harmful, according to defense health officials.

Flea collars first gained widespread popularity with soldiers who spent time in the Middle East during the Gulf War. Some researchers have even suggested that the pesticides may be culprits in the mysterious Gulf War Syndrome, although that has not been proven.

&#8220;We went through the same thing in 1990,&#8221; Air Force Lt. Col. Roger Gibson, a veterinarian and public health official in the Defense Department&#8217;s Health Affairs office, said in a Thursday telephone interview.

Military health experts went back on the warpath after receiving reports that troops deployed to Afghanistan and Iraq are writing home to ask friends and family to send them the flea collars.

While the collars &#8220;are great for dogs and cats, they aren&#8217;t made for humans,&#8221; said Army Surgeon General spokeswoman Lyn Kukral, who also spoke by phone Thursday.

The pesticides impregnated in the collars have never been approved for human use by the Food and Drug Administration or the Environmental Protection Agency, Gibson said.

Nor have manufacturers ever run safety tests on humans, he said.

Sweat leeches out large quantities of pesticides and spreads them over the skin, causing burns.

Pesticides released by the collar can also be absorbed into the body through pores in the skin, &#8220;causing systemwide poisoning,&#8221; Kukral said.

Wearing the collars over clothes, as some servicemembers do, doesn&#8217;t help much, the defense officials said.

The collars might keep fleas away from the few inches of skin immediately surrounding the item, but the bugs just take a hike and end up somewhere else on the trooper&#8217;s body.

But more to the point, the collars were designed to repel canine and feline fleas, not sand fleas, which are the principal insects servicemembers in Iraq&#8217;s deserts are trying to avoid, Gibson said.

Tips on keeping bugs at bay ...

&#182; The first and most important line of defense against insects in the field lies in covering as much skin as possible, health officials say. That includes tucking trousers into boots and undershirts into pants, rolling down sleeves, and wearing the uniform blouse, which adds a second layer of protection to the torso.

&#182; Uniforms should be treated with permethrin, and skin with DEET.

&#182; Try not to sleep directly on the ground, and if that&#8217;s not possible, use a poncho liner treated with permethrin between your body and the sand.

&#182; Don&#8217;t apply permethrin directly to skin, allow it to dry completely before donning a treated uniform, and don&#8217;t use DEET on eyes, lips or broken skin.

For a detailed guide to protecting yourself against insects when you are in the field, see the guide called &#8220;Personal Protective Measures Against Insects and Other Arthropods of Military Significance.&#8221; (Click here)