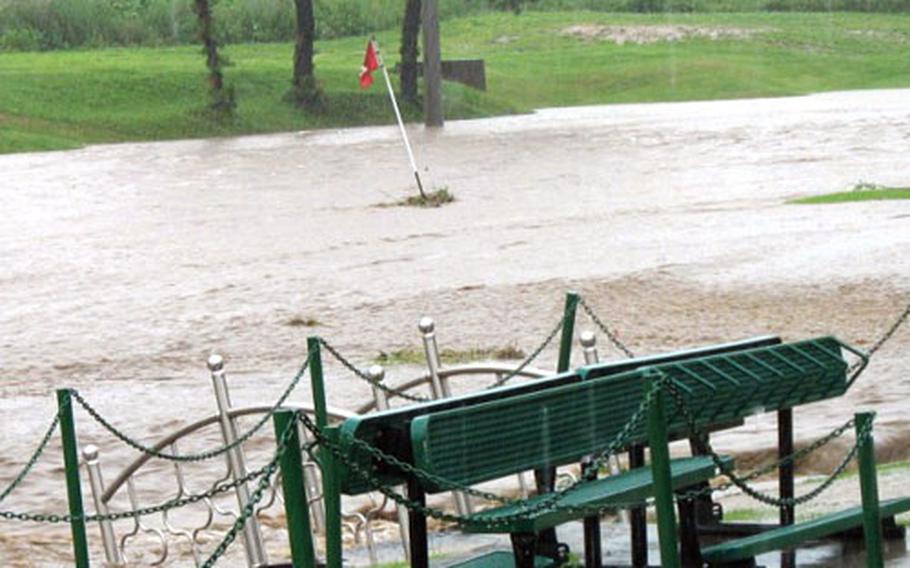 CAMP RED CLOUD, South Korea &#8212; Design flaws in a dam constructed by a federal contractor in 2005 played a major role in an estimated $1.6 million in flooding damage at Camp Casey this month, camp officials said this week.

The 10-foot height of a raw water intake dam interrupted storm water drainage from upper streams and surface water runoff, according to a base damage assessment.

Heavy rains have fallen throughout the month over most of South Korea, but July 12 was the breaking point for Camp Casey.

Most of the greens, fairways and irrigation systems on the camp&#8217;s golf course were destroyed, with total damage estimated at $1.4 million, according to the assessment. Damage to four buildings and infrastructure totaled more than $200,000, officials said.

Removing and resizing the dam would cost more than $430,000, the assessment said.

The name of the contractor that built the dam was unavailable Thursday afternoon.

Camp Casey used a job-order contractor, according to the assessment. Those contractors usually work on-call under a contract. Often, such contractors are not required to bid for projects.

Most other bases in Area I and II saw little or no damage, officials said. Base public works employees &#8220;were out there as soon as they could be to stave off any additional damage,&#8221; said John Nowell, spokesman for the Installation Management Agency, Korea Regional Office.

However, Dongducheon officials voiced concerns Thursday over whether Camp Casey&#8217;s response to the flooding was adequate.

Dongducheon officials also want to discuss potential compensation for damages, though Kang did not specify what that would entail. Camp officials were unavailable Thursday for comment on the city&#8217;s claims.