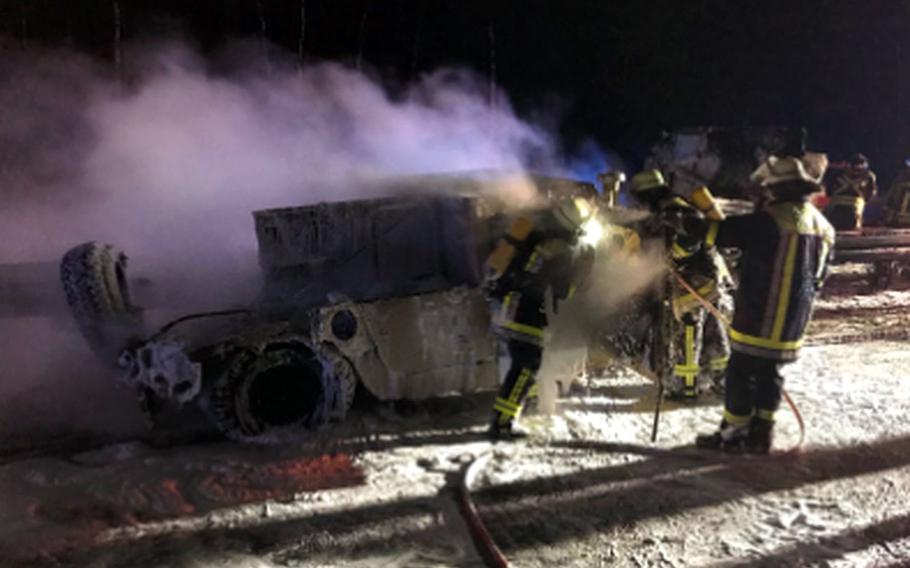 A U.S. Army Humvee caught on fire while being towed on autobahn A93 near Regnitzlosau, Germany, in Bavaria on Thursday morning, Jan.18, 2018. The autobahn had to be closed in both directions for the fire department to put out the blaze. (Courtesy Polizei Oberfranken)

A Humvee being towed for repairs on a major roadway in Bavaria suddenly burst into flames and smashed into a guardrail before coming to a stop, German police said.

There were no injuries in the early Thursday morning incident, police said Friday.

The Humvee broke down on Autobahn 93, and soldiers were towing it between Hof-Nord and Regnitzlosau for servicing at a U.S. facility in Grafenwoehr when its axle overheated and ignited the vehicle.

The soldiers disconnected the burning vehicle to keep it from igniting the tow vehicle. But once the burning Humvee was free, it rolled into the middle of traffic and hit a guardrail. Damage to the Humvee was estimated at 80,000 euros, or about $98,000, police said. The accident shut down traffic in both directions.

The accident is the third this month for the military in southern Germany. Earlier this week, a fuel truck crashed while making a delivery. Last week, German police stopped an Army convoy hauling self-propelled howitzers on Autobahn 4 because the trailers were overloaded.

Army officials were not immediately available for comment late Friday.