'Flags-In' sets the stage for Memorial Day at Arlington 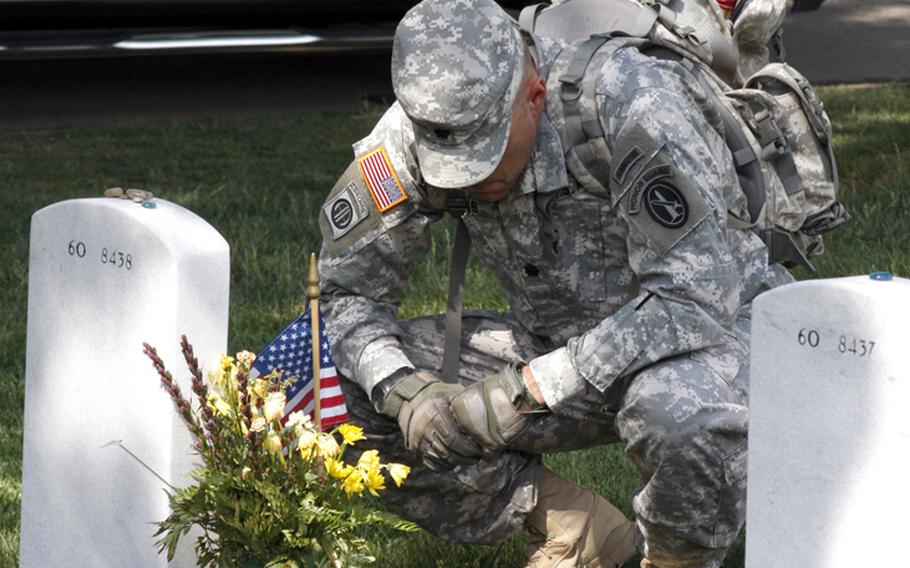 A soldier pauses after placing a flag at the grave of Army Maj. Douglas E. Sloan in Arlington National Cemetery's Section 60, where servicemembers killed in Iraq and Afghanistan are buried. Over 220,000 flags were placed at the cemetery Thursday in an annual Memorial Day weekend ceremony. (Joe Gromelski/Stars and Stripes)

"I get the privilege of honoring all the ones who have sacrificed so much for our country," Army Capt. Shahin Uddin said as he placed flag after flag at grave markers, always centered and one foot away from the stone. "This is the one day of the year when we get the privilege of coming out here and putting a flag right next to their tombstone to remember them and pay respect."

Among those watching "Flags-In" were Helen Willits and her daughter Terese Tunney, both of whom who flew in from Ohio for the ceremony; and Tunney's daughter, Katherine, from Maryland. Willits' husband, Warren, was a World War II veteran who died in 2010.

"My dad is buried here," Terese Tunney said, "and it's heartwarming to see all these young soldiers here, doing this service for all their comrades. It's an important day for us, to be with my dad."

The "Flags-In" ceremony "brings back a lot of memories for me," added Willits.

Another Arlington visitor during the event was Col. Paul Calbos, former commander of Regional Support Command-North in Afghanistan. A week away from retirement after a 30-year Army career, Calbos "wanted to make one of my last actions to come down here to Section 60," where many servicemembers killed in the Iraq and Afghanistan wars are buried.

"I think every American should come to Arlington to get a feeling for the price of freedom, and what it costs when we send our sons and daughters off to war," Calbos said. "Not an easy decision."