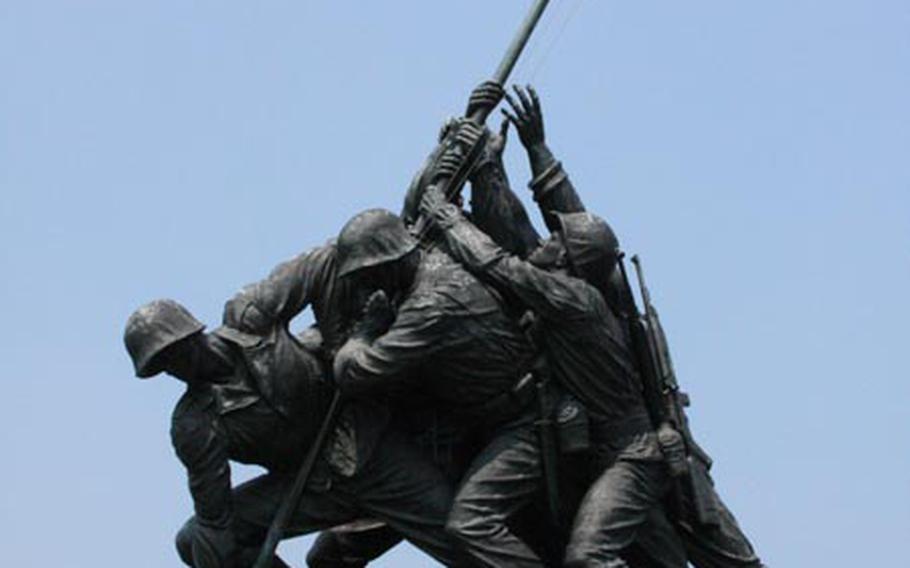 Mary Pero, sister of Marine Sgt. Michael Strank, speaks about her brother’s life during a ceremony at the Marine Corps War Memorial in Virginia on Tuesday. Strank, one of six servicemembers immortalized during a flag raising at Iwo Jima, was born in Czechoslovakia and never was officially recognized as an American citizen despite meeting naturalization requirements. On Tuesday federal officials presented his younger sister, Pero, with paperwork honoring his service and confirming his citizenship. Strank is the last Marine on the right in the monument. (Leo Shane III / S&S)

WASHINGTON &#8212; The flag raising at Iwo Jima has become an iconic American image, so federal officials were surprised to learn recently that one of the men was never fully recognized as an American citizen.

Sgt. Michael Strank, one of the Marines immortalized while struggling to lift Old Glory, was officially honored as a U.S. citizen and hero at a ceremony Tuesday in front of the Marine Corps War Memorial in Virginia. It was long overdue.

"He&#8217;s a wonderful example of the contributions and sacrifices that immigrants have made to our republic," said Jonathan Scharfen, acting director of U.S. Citizenship and Immigration Services.

Strank was born in Czechoslovakia in 1919 and moved to Pennsylvania with his mother in 1922. His father, already living in the country, earned his U.S. citizenship in 1935, which under immigration law then automatically made his son a citizen, too. But the family never obtained paperwork confirming that, even after their oldest son joined the Marine Corps in 1939. Strank served for three years before the flag raising, and was killed in battle less than a month later on Iwo Jima.

The oversight likely would never have been discovered if not for the work of Gunnery Sgt. Matt Blaise, a Marine currently stationed at the Slovakia Embassy who researched Strank&#8217;s life and service as part of a history hobby. He contacted several federal agencies looking for documentation about Strank&#8217;s citizenship. When they all came up empty, he petitioned military and immigration officials for recognition.

Strank&#8217;s only surviving sibling, Mary Pero, accepted a new citizenship certificate at Tuesday&#8217;s ceremony. She said while no one in her family ever doubted his status as an American hero, the certificate is still precious to her.

"I remember my parents talking about how important it meant for them to get that paper, to know they were citizens," she said. "This just makes me so proud.