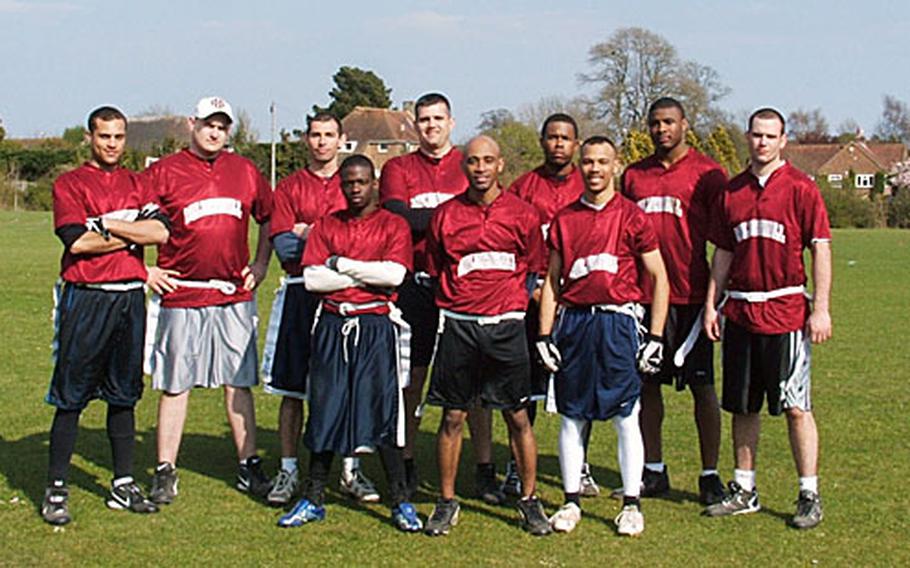 Many Americans would not dispute this simple statement: American football is awesome! The hits, the fourth-quarter heroics and the superhuman feats make it a blast to watch and play.

But that playing part can get a bit tricky. An impromptu game of tackle football is the epitome of a good time with friends, but sometimes those hits can hurt. The mind may be willing, but the body is just unable.

Novice football enthusiasts who still want that competitive rush without the bumps and bruises should check out the English Senior Flag League, a grass-roots flag football organization here in Britain that is gaining popularity.

Teams in the nine-team league play five-on-five on a 60-yard field. Instead of four downs to get 10 yards, teams have four downs to get to the midpoint of the field, and then another four downs to make it into the end zone. And when a team turns the ball over on downs, the opponent has to begin in its own end zone.

Black played on a team centered on London&#8217;s Navy community last year, and has worked to bring the sport to the local Air Force bases.

In the coming months, the Mayhem will play monthly round-robin tournaments on Sundays, as well as larger tournaments in Italy and Germany.

Those who scoff at flag football need to think again. The sport is gaining popularity in Europe, and involves a skill set not always seen in the standard version of the game.

And for defenders, there are no second chances to get your man, he said.

While the Mayhem has a full roster, Black said anyone who&#8217;s interested in fielding a team should contact him. For now, joining the league is free and there&#8217;s not much involved in terms of cost.

Black said he hopes an increase in the sport&#8217;s profile might lead to official recognition by U.S. Air Forces in Europe.

Mildenhall-based Airman 1st Class Alan Alexander said he was recruited by Black to be part of the Mayhem, and that a lifelong love of the pigskin brought him in.

The league also brings Brits and Americans face to face in the name of friendly competition, Alexander said. Yanking that flag from an opponent&#8217;s waist is good diplomacy.