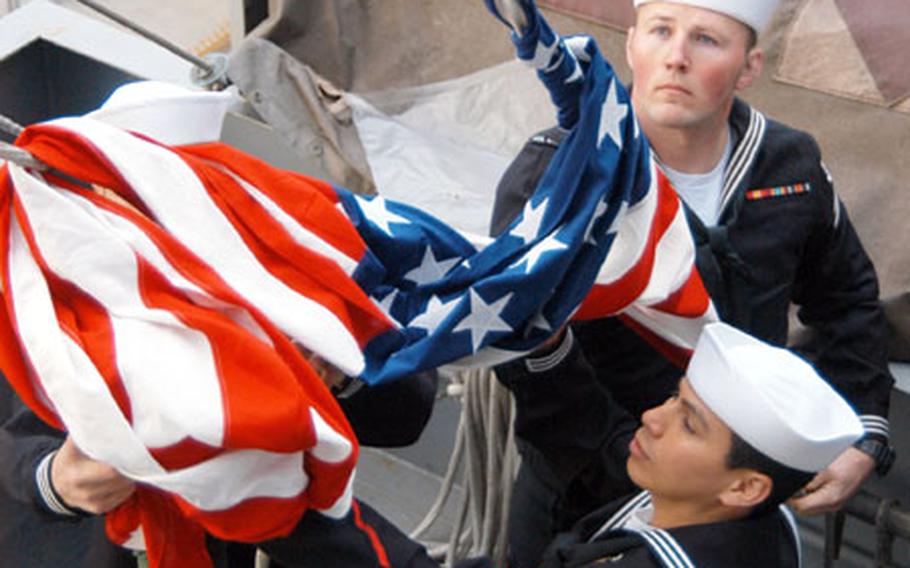 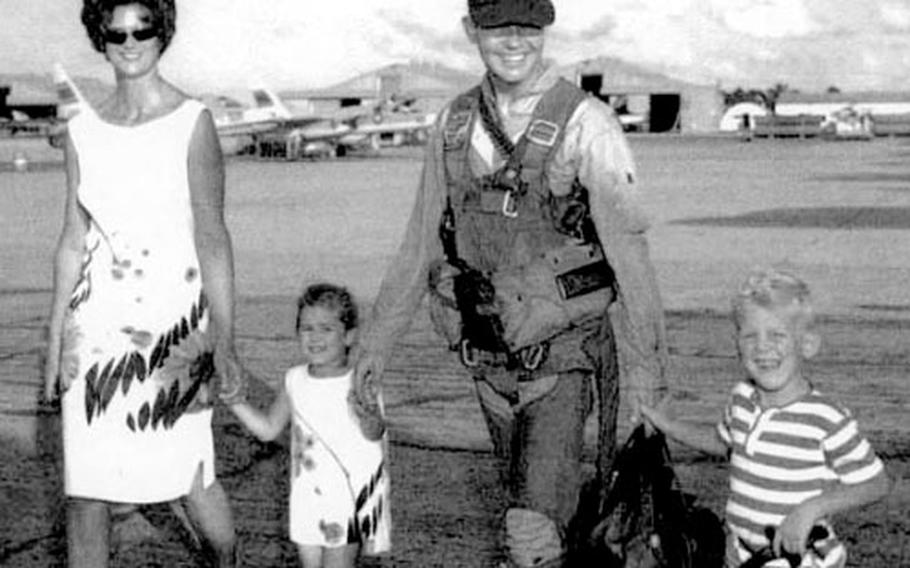 This flag had flown over the U.S. Capitol, the Pentagon, the CIA and the National Security Administration &#8212; where Jeff Johnson is a special agent with the Associate Directorate of Security and Counterintelligence &#8212; and was headed now across the ocean to Yokosuka, Japan, and the Navy&#8217;s oldest active-duty aircraft carrier.

It was raised above the Kitty Hawk last Wednesday, 41 years to the day (and nearly the time) that Jeff Johnson&#8217;s father &#8212; Capt. Guy David Johnson &#8212; and his navigator, Lt. Cmdr. Lee Edward Nordahl, catapulted off the carrier&#8217;s flight deck and never returned.

Jeff Johnson&#8217;s father was shot down over North Vietnam on Dec. 20, 1965, five days before Christmas and nine days before Jeff&#8217;s fifth birthday. The pair left the carrier on a short bomb-damage assessment flight over a &#8220;heavily defended&#8221; area of North Vietnam, but never made radio contact. Subsequent searches turned up nothing.

Guy Johnson and Nordahl were declared &#8220;missing in action&#8221; until 1977, when the Vietnamese government confirmed they shot down the RA-5C and that both crewmembers were killed. Guy Johnson&#8217;s remains were returned to the family that year; Nordahl&#8217;s body is still missing.

Jeff Johnson&#8217;s mother, Anne, was buried with a flag, too, as she was a naval reserve nurse. She died of stomach cancer in 1966, a year after her husband went missing. They were laid to rest together in 1977 under a shared headstone in Arlington National Cemetery. Jeff Johnson and his younger sister, Jenny, were raised by Anne&#8217;s brother&#8217;s family.

That it could be flown over the Kitty Hawk on the anniversary of his father&#8217;s death is timely, as the aircraft carrier is 45 years old and is due to leave Yokosuka in 2008 for decommissioning.

&#8220;The Johnson family and the Kitty Hawk are tied together,&#8221; said Kitty Hawk spokesman Chief Petty Officer Jason Chudy after the flag-raising ceremony. &#8220;We wanted to make this as honorable as we could, and hopefully give the family some closure.&#8221;

Jeff Johnson said that he hopes for the chance to visit the Kitty Hawk and thank the crew personally for their efforts.

The flag will stay in the family &#8212; it has since passed to Johnson&#8217;s son David, who received it when he became an Eagle Scout.

According to Jeff Johnson, David&#8217;s eyes widened during the ceremony when his grandfather&#8217;s commendations and citations were enumerated.

&#8220;You could see in his eyes that this was important and that he was about to receive an heirloom that meant a lot to the family,&#8221; Jeff Johnson said. &#8220;I would be honored if he passes that flag on down to his son with the same feeling. I think that as David grows older, he will understand his own accomplishments with pride and also understand the importance of his past &#8212; and what his grandfather did and gave up for his family and country.&#8221;

7:59 a.m. &#8212; They cross into North Vietnam, north of Haipong to survey damage to a bi-thermal power plant and highway bridge (no radio calls).

4 p.m. &#8212; Search effort halted. Johnson and Nordahl placed on &#8220;missing in action&#8221; status. The pair continued to be promoted in this status, Johnson to captain and Nordahl to lieutenant commander.

Vietnamese government confirms it shot down Flint River 604 and both crew members had been killed.

They are later confirmed to be those of Johnson.

8:07 a.m. USS Kitty Hawk flag detail raises a flag that had covered Johnson&#8217;s casket above the aircraft carrier at the conclusion of morning colors.

After a reading and moment of silence, the flag is lowered and folded for return to family.