Fixes to 'up or out' promotion system could take years 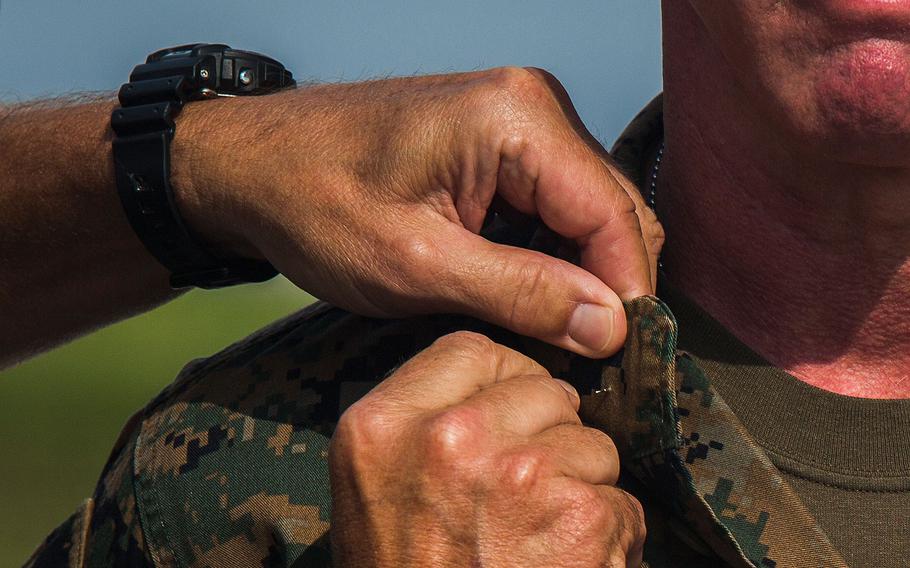 Kane, a former U.S. Air Force intelligence officer who served two overseas tours, said Monday that the system is on the verge of a revolutionary change for the first time in more than 30 years.

Defense policy legislation ready for President Donald Trump’s signature would install the most widespread reform of the Defense Officer Personnel Management Act since it was enacted in 1980.

“The revolution has arrived,” said Kane, a Hoover Institution fellow at Stanford University who testified before a Senate panel on the proposed reforms this year. “There is a theme and that theme is ‘up or out’ is out. Flexibility is in.”

The massive $716 billion National Defense Authorization Act, or NDAA, for fiscal year 2019 would authorize a wave of new reforms and policy efforts starting Oct. 1, if signed by Trump on time. The NDAA would break down the rigid confines of the Defense Officer Personnel Management Act, also known as DOPMA.

Experts and military leaders have long called for reform of DOPMA, which standardized military promotions across the armed forces. Instead, they said, the services need new flexibility to compete with the private sector in the midst of demands for a force of the future.

“We appreciate the many officer management flexibilities the proposed NDAA would provide to the department and the military services,” said Air Force Maj. Carla Gleason, a Pentagon spokeswoman. “These proposed changes would help us better manage our officer corps in the 21st century.”

But what does this mean for servicemembers of today and tomorrow? Experts said the changes, while exciting, could still be years in the making.

For example, if the reforms become law, as is widely expected, the services might conduct more studies before issuing new guidelines and executing the plans.

“I wouldn’t expect any quick changes on this,” said Dan Grazier, a fellow at the Center for Defense Information for the Project On Government Oversight, a nonpartisan government watchdog group.

Pilots, techs could benefit first Among DOPMA’s most dramatic changes, the services will be able to use civilian experience to establish a new rank for an entering servicemember. Certain officers could also promote faster under the proposed reforms.

The military will also see new levels of flexibility when it comes to some of the stringent “up or out” requirements that have forced many troops to leave the services. For example, gone would be the expectation of retirement if a servicemember fails to promote twice.

“These things point to an end to the need to build your career around promotions,” said Kane, who is the author of “Bleeding Talent: How the U.S. Military Mismanages Great Leaders and Why It’s Time For A Revolution” and “Total Volunteer Force: Lessons from the U.S. Military on Leadership Culture and Talent Management.” “We will see the military build careers around excellence.”

The earliest adopters of the new provisions could be seen among Navy and Air Force pilots, some experts said. In those cases, pilots have increasingly complained of losing flying time as a result of the “up or out” promotion system.

For example, pilots reluctantly shipped off to school or command positions for promotion could now choose a new track to stay in their current roles and keep flying.

“I could see pilots taking advantage, … if they are in flight positions, just staying where they are,” Grazier said. “Pilots are the main ones screaming into my head” that benefit off the new DOPMA reforms.

Another major reform could come in the form of counting civilian experience toward a new servicemember’s rank.

In one scenario, a combat Marine could leave to get a master’s degree in business administration, become a logistics expert at Walmart, and then return to the service at a higher rank, Kane suggested.

“You could see someone go from an O-2 to an O-4 [from first lieutenant to major] according to the logic of this,” he said.

The changes could become especially valuable for returning veterans who leave the military for technology careers in Silicon Valley who want to return at a higher rank, or for people who haven’t been in the military at all.

Among certain circles of watercooler chatter on DOPMA reform, there’s also the fictional Mark Zuckerberg example. Under the new reforms, the Facebook co-founder and CEO could potentially join the military at a higher rank.

But how will services incorporate a leader, who has never previously served, giving orders? That could be tough, Grazier warned.

“This is going to be one of the problems the services are going to have,” he said.

Pay is a roadblock How each of the services implement the potential reforms remains to be seen.

But the Navy and Army could have a head start, Kane said.

For example, the Army is promoting a new direct commissioning program this year for its Cyber Command that allows civilians with tech skills to join as officers. In May, the program directly commissioned its first two officers.

“I’ve had conversations with Army and Navy officers at the highest levels, they have teams working on this,” Kane said. “They have been working on this for years. This might allow them to implement (new reforms) more freely than they were able to do beforehand.”

But Grazier said it could take time for such a big, cultural shift to take place.

“At the very beginning, I’m not sure it will mean all that much. So many are used to the status quo, so not many may be quick to take advantage,” he said. But “I think over time, that cultural aspect will change.”

Though past reform efforts have fallen flat, such as an attempt led by former Defense Secretary Ash Carter in 2016, at least Congress is driving the changes this time, Grazier said. That gives teeth to the reforms.

The NDAA’s provisions leave a lot of room for services to implement their own approaches, he said. So for now, that could mean less clarity on what those reforms might look like for each service in the future.

“There’s lots of mystery involved in this,” Grazier said.

Still, more senior members of the military might not be able to take advantage of the changes, no matter how quickly implemented. For example, career trajectories already might be set for many majors in the services or officers with a ranking above an O-4.

But servicemembers with only a few years in the military might see a drastically different landscape when it comes to their futures.

“Anybody only in the service three or four years and you are thinking about career, your career is going to look radically different,” Kane said. “There are going to be flexibilities that haven’t been around.”

But the same can’t be said for pay.

Servicemembers who decide to stay in their positions, and forgo promotion, could lose out on higher pay.

“I think the services are working on pay scales that are still rigid… Pay is still a roadblock,” Kane said. “The pay tables are probably next in line (for reforms). But that’s OK, you can’t eat a hamburger in one bite. They did the most important step here” addressing the promotion reforms first.

Also, it’s not clear how the Marines, who were less enthusiastic about the reforms, will adapt to the changes, some experts said. However, services can adapt as much as they want, Kane points out.