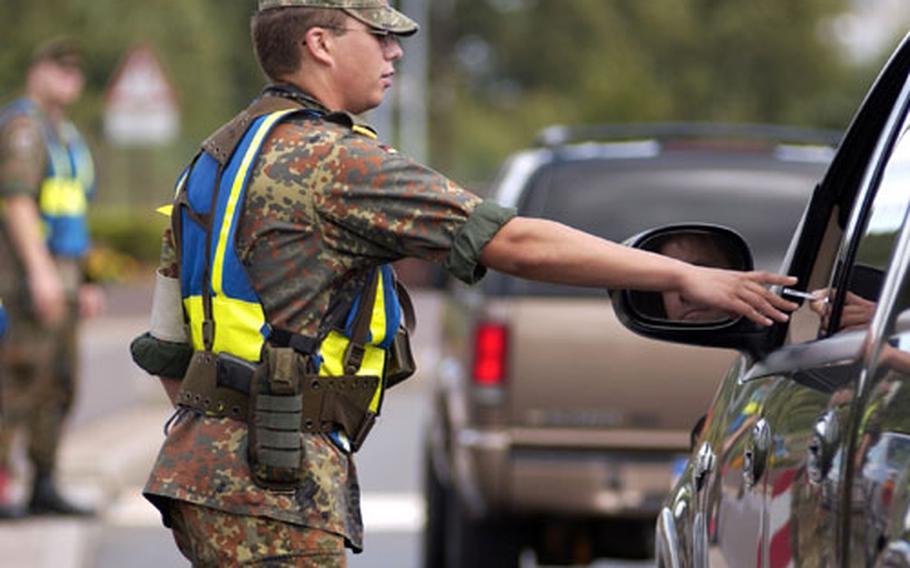 Benjamin Hormann, a member of the German Bundeswehr, checks identification cards at Ramstein Air Base’s west gate last month. Before the Sept. 11, 2001, terrorist attacks, most bases in Germany were open to the public. (Ben Bloker / S&S)

Five years after the Sept. 11, 2001, attacks, the makeup and mind-set of the U.S. military in Europe are dramatically different.

The Pentagon&#8217;s plans to mold its overseas forces to fight 21st-century threats were kicked into high gear.

Once guardless bases in friendly nations such as Germany and the United Kingdom became barricaded fortresses.

The number of U.S. troops at Cold War-era bases shrunk, but many servicemembers are working harder and longer in support of the war on terror and the war in Iraq.

Air Force Master Sgt. Jenny Luttrell, who in 2001 was a member of the Elite Guard at the U.S. Air Forces in Europe headquarters at Ramstein Air Base, Germany, said the attacks changed everything.

&#8220;I was here during the Cold War, so I do understand how much we were changing before September 11th.

The U.S. military has long been criticized as an organization slow or incapable of change, but the attacks quickly altered the face and role of overseas bases built decades ago to fight a much different enemy.

When the U.S. invaded Afghanistan to go after al-Qaida and the Taliban, troops based overseas were among the first to go.

With Europe halfway between the continental United States and Iraq, American bases in places such as the United Kingdom, Germany, Spain and Italy became rest stops and launching pads for troops and cargo.

With nearly 35,000 patients treated there from operations Iraqi Freedom and Enduring Freedom since 2001, the hospital is one of the busiest bases in Europe.

Before the attacks, the center mainly took care of the local population of soldiers, family members and retirees. Now the vast majority of troops wounded in Iraq and Afghanistan come through the hospital.

Of the patients flown in from Iraq and Afghanistan, almost 6,500 have been battlefield casualties. Daily operating room cases have doubled, from nine to 18 on average. Personnel-wise, Landstuhl&#8217;s staff now numbers around 2,000, about 550 additional people as a result of the fighting.

&#8220;We not only are bringing all the patients in from the war zone, but we&#8217;re also taking care of our beneficiaries here in Europe and throughout the region with not a whole lot of disruption,&#8221; said Jeffrey B. Frazier, who has been at Landstuhl since 1989 and serves as the patient administration division&#8217;s deputy chief.

Security tighter everywhereThe most visible change at most installations &#8212; besides busier troops &#8212; is an unprecedented boost to base security.

Although the military could not provide figures on how much has been spent on improving security during the past five years, commands have spent millions to better protect installations in Europe against terrorism.

Before 2001, most bases in Germany were open to the public much like any residential subdivision in town. Anyone could enter the hospital at Landstuhl without a question.

Now, access onto the installation is limited to a single gate for vehicle traffic.

Wide-open housing areas and small posts with little fencing and no sentry or gates now are fenced in and heavily guarded with high-tech sensors, roving security patrols and bomb-sniffing dogs.

Military police forces also have increased. The Navy, for example, has swelled its master-at-arms ranks by thousands of people.

And security experts are looking at making additional changes.

Bases throughout Europe, for example, are considering alternatives that include incorporating the latest in technology, to hiring U.S. or local-national civilians, or contracting out certain security work, said Tony Reid, anti-terrorism/force protection manager for Navy Region Europe in Naples, Italy.

More importantly, the attacks created a &#8220;heightened awareness&#8221; of security, both on a personal and professional level, Reid said.

&#8220;Awareness and vigilance is what needed to change and a lot of effort was made to ensure personnel were made more aware," he said. &#8220;With current events, it continues to be even more important.&#8221;

Accelerating transformationBefore 2001, the Pentagon was already looking to overhaul its forces stationed worldwide. But plans to revamp or shutter old bases took on a sense of urgency.

Frank J. Gaffney Jr., president and chief executive officer of the Washington, D.C.-based Center for Security Policy, said the Sept. 11 attacks forced the military to configure and position itself across the globe to fight what he calls the &#8220;war for the free world.&#8221;

&#8220;The impact of that day certainly catalyzed the need to make adjustments,&#8221; said Gaffney, a former assistant secretary of defense for international security policy during the Reagan administration.

Changes to European bases moved faster than many predicted.

Bases continue to close as thousands more troops leave. This past summer, in one of the military&#8217;s biggest moves, the Army&#8217;s 1st Infantry Division marked its transfer from Germany to Fort Riley, Kan. According to Franconia garrison officials, only about 500 soldiers will remain by year&#8217;s end, down from about the 4,000 soldiers that inhabited bases at W&#252;rzburg, Kitzingen and Giebelstadt earlier this year.

The move is just the beginning of a plan by President Bush to transfer as many as 70,000 American servicemembers from overseas posts to stateside bases.

But while bases have closed or changed and security measures have tightened over the last five years, the biggest adjustment has come from within the people who serve in the military, said Staff Sgt. Jeremy Louk, the unit deployment manager for the 52nd Mission Support Group at Spangdahlem Air Base in Germany.