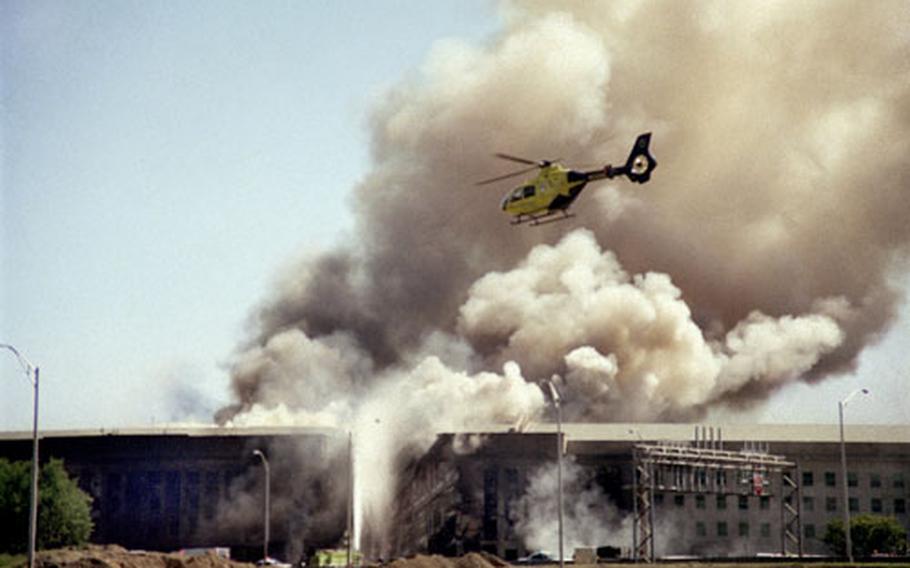 A helicopter flies over the Pentagon on Sept. 11, 2001, after terrorists crashed a hijacked airliner into the building. (Heenson Yim / AP)

Stars and Stripes reporters Lisa Burgess and Sandra Jontz were at work at the Pentagon on Sept. 11, 2001, when terrorists crashed a commercial airliner into the building. Five years later, they give their recollections of that day.

Today, I work in the reconstructed area, just a few feet away from dead center of the fiery path the plane took through the building.

Back then, the Pentagon press corps worked on the opposite side of the building.

An enormous explosion yanked my attention to the windows, where I saw across the courtyard an enormous ball of fire.

I tried to call my bureau chief, who is in our downtown D.C. office, on my cell phone. The phone was dead.

I turned around and ran back to my office, where I called him with what little I knew. Security guards were at the door of the press room insisting that the handful of reporters inside get out.

My Stars and Stripes colleague at the time, Sandra Jontz, and I were torn. We didn&#8217;t want to get in the way, but we wanted to find out what was going on. We wanted to do our job as reporters.

So we compromised: We headed outside, but we took the long way around, through the Pentagon&#8217;s central courtyard, where a trickle of choking, coughing employees began staggering out.

One of the wounded was someone who looked like a half-naked black civilian, guided by two officers whose clothes were soaked and covered in soot.

He was staggering, blinded, holding blackened arms in front of himself like Frankenstein. Strings were dangling from his back. I thought they were from his shirt, but when I looked again, I saw it was his flesh.

Sandra, who was a medic, and medical personnel from the Pentagon&#8217;s clinic rushed to help the man. As they scissored away his remaining clothing, I saw that he wasn&#8217;t ethnically black &#8212; his exposed skin had been completely charred. The medics couldn&#8217;t even start an IV, his burns were so deep.

Someone brought a cart and they took the man away. Where he had lain rested his burned BVDs and one brown loafer.

I wondered if he would make it. It was hard to imagine anyone so badly burned and living.

Finally, about 3 p.m., the firefighters declared the center courtyard the morgue.

We all left, and I got my first look at what the plane had done to the Pentagon.

I fell to my knees.

On Aug. 31, 2006, my Sept. 11 experience came full circle: I interviewed John Yates, the burned man from the courtyard.

As soon as Yates told me about walking into the courtyard &#8220;like Frankenstein&#8221; I knew who he was.

It hit me hard, seeing him face-to-face, listening to him talk about the events of that morning.

He told me how, despite his shock and pain, he was humiliated to lose his underwear, and that he tried to cover himself up as they were moving him to the cart to take him out of the courtyard.

I told him how seeing the charred BVDs had bothered me, and how the image has stayed with me all those years.

I was taken aback.

I was choking up.

Yates looked away, his eyes filling, too. Then he lightened it up for both of us.

Sandra Jontz:I keep a print of the damaged Pentagon displayed in my living room. An aerial image of the Pentagon&#8217;s charred wall and rooftop, the partially collapsed edifice, debris strewn on the lawn.

It&#8217;s not a pretty picture, and I&#8217;m not 100 percent sure why I keep it up, clamped in a tabletop easel from Restoration Hardware. Friends visiting for the first time often ask about the print.

What a loaded question.

It was chaos. Fear. A few gruesome moments. Fewer still, moments of satisfaction after having helped someone.

One moment, however, one flash of realization, resonates with me after these passing five years. Let me set the scene: The precise passage of time escapes me, but it might have been two hours after the morning attack. I had helped treat some patients in the center courtyard, then made my way to the outer areas where medical people were divided based on their skill level.

I was part of the medical crews who had gathered on the north lawn to set up triage centers, ready to treat people based on the severity of their wounds. We laid rows of stretchers and backboards, set up IVs, gathered gauze pads, bandages, splints, etc.

And then waited. Just waited. I stood in a sea of stretchers. Empty stretchers. And it hit me.

I&#8217;ll forever remember the sickening feeling, the metallic taste in my mouth as I wanted to hurl. It lasted but a moment, but it was a flash that left an indelible mark in my memory.

At the time, I was a certified Emergency Medical Technician and volunteered during my off hours at the Fredericksburg, Va., Rescue Squad. On Sept. 11, my co-worker, Lisa Burgess, and I temporarily set aside our reporters&#8217; notebooks to give first-aid where possible. Her story is amazing.

Wow, that was five years ago.

I&#8217;ve never been one to believe things happen for a reason. Things just happen. Good things. Bad things. I don&#8217;t believe my life on Sept. 11 was spared by any divine intervention, or for some yet-to-be-revealed reason. For me, that makes the alternative too much to handle.

On Sept. 11, the statistical probability of survival were in my favor. Or maybe just luck. I was one wedge away. Heard the thud of the plane crash into the western wall, and felt the cubicle dividers tremble.

It might sound trite, but I don&#8217;t think that one day changed me.

But I certainly do have a greater appreciation for the simpler things of life. And never miss a chance to tell those whom I love that, well, I love them. And I&#8217;m grateful they are part of my life.