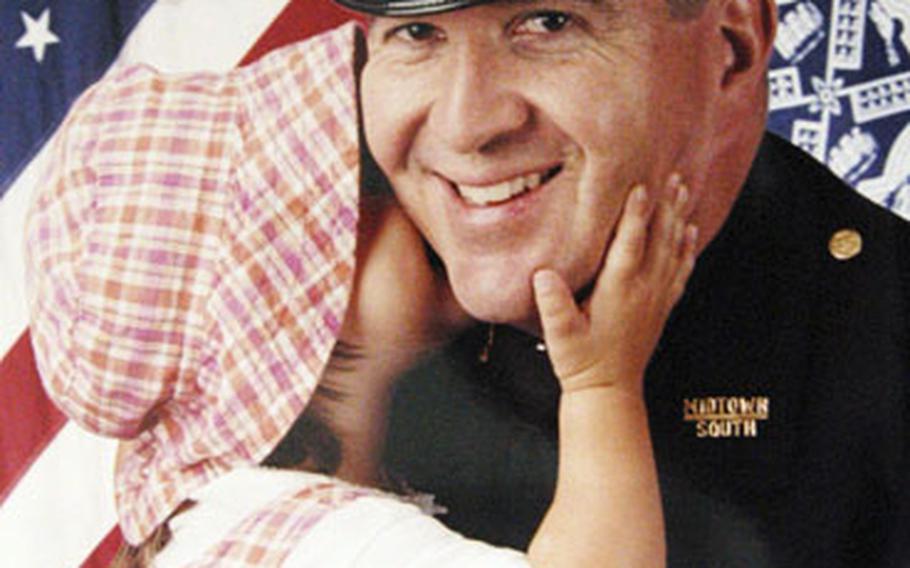 Mike Michell, in his New York City cop days, gets a hug from his daughter, Corri. (Courtesy NYPD)

YOKOSUKA NAVAL BASE, Japan &#8212; Mike Michell commemorates the Sept. 11 terrorist attacks the same way every year: He gets up and goes to work.

On that eventful day in 2001, however, going to work meant picking up the pieces and keeping the rest from crumbling in a city left wounded and stunned as two planes crashed into the World Trade Center.

&#8220;The first days were surreal, the dust and the haze &#8230; the whole city smelled singed, like an electrical fire,&#8221; said Michell, now a Naval Criminal Investigative Service special agent at Yokosuka Naval Base, Japan.

&#8220;It wasn&#8217;t normal police work &#8212; it was more like construction,&#8221; he said of that day, describing duties that included search and recovery at ground zero, keeping pilferers away and manning volunteer bucket brigades to painstakingly remove debris in the hunt for possible survivors.

He knew one of the 23 New York City police officers killed, and early in his career Michell used to patrol the Wall Street district in lower Manhattan, a beat that included the Twin Towers.

The shock of the attack at first created a lull in crime, even in the busy midtown Manhattan precinct, where Michell worked.

Nowadays Michell has a different mission, a different boss. He is the NCIS acting supervisory special agent at Yokosuka, and is a U.S. Army Reserve captain who puts in his weekend time at Camp Zama.

But his philosophy remains the same.

He still strongly identifies with his New York cop days, with photos on the walls and a scrapbook he takes out for office visitors. Though he grew up in northern Virginia, he loved working in the Big Apple.

So he did, cutting his teeth working nights around the Empire State Building, Times Square, Hell&#8217;s Kitchen, Broadway and Grand Central Station.

NCIS offered Michell a job just days after the Sept. 11 attacks. He didn&#8217;t want to leave at first, he said, especially while his colleagues were pulling morgue details and sifting through landfills looking for human remains.

But NCIS also represented a way to cope with the attack &#8220;on a larger scale,&#8221; he said. One of his first assignments brought him to Guantanamo Bay. There, he interviewed suspected Taliban and al-Qaida members as part of a task force made up of the Air Force Office of Special Investigations, Army Criminal Investigation Division and the FBI.

He got even closer to the war on terrorism when he was called up to serve 15 months in Iraq and Kuwait with the 800th Military Police Brigade. He helped set up the Iraqi prison system and later received a Bronze Star.

Today, the fifth anniversary of the Sept. 11 attacks, he&#8217;ll be thinking mostly about New York City.

After attending a memorial service at Yokosuka&#8217;s Chapel of Hope, he figures he&#8217;ll do what he always does: