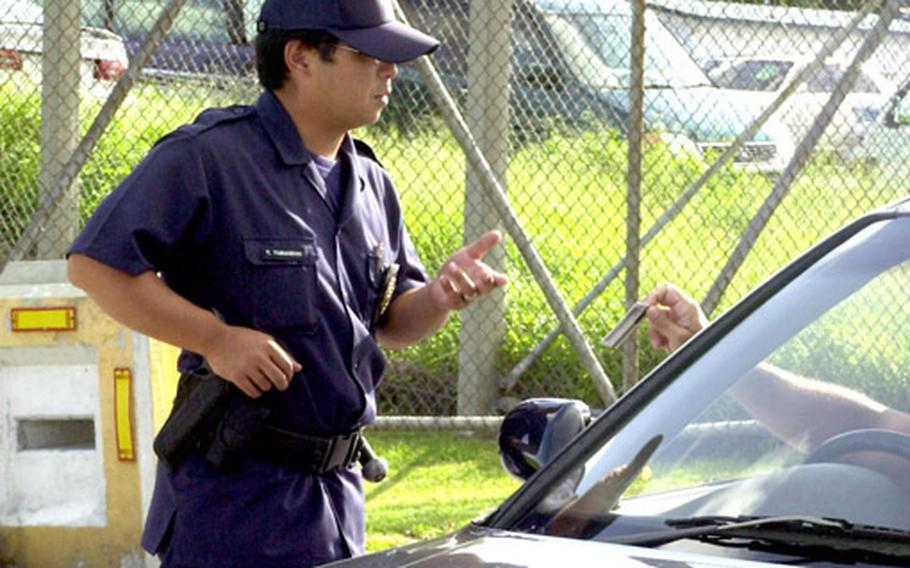 Five years after terrorists flew hijacked airliners into the World Trade Center and the Pentagon and commandeered another that crashed in Pennsylvania, the makeup and mind-set of the U.S. military abroad are dramatically different.

The number of American troops at Cold War-era bases in the Europe and Pacific regions is smaller, but many servicemembers are working harder and longer in support of the war on terror and the war in Iraq. Deployments and long assignments at smaller outposts are almost routine.

Some bases in friendly, allied nations such as Japan and South Korea have much more restricted access out of a fear of a terrorist attack. Added to barbed wire, chain-link fences are high-tech sensors to catch intruders, along with defensive devices to thwart vehicle entry.

Although the Pentagon already was trying to mold its overseas forces to fight 21st-century threats, the attacks kicked those plans into high gear. Thousands of troops already have returned to the United States as part of the U.S. military&#8217;s transformation, and that&#8217;s just the beginning.

The military has long been criticized as slow to change, but the attacks five years ago caused many changes at overseas bases built decades ago to fight a much different enemy.

Among the biggest changes in the Pacific is the troop drawdown in South Korea.

In early 2001, there were about 37,000 U.S. troops on the peninsula. But after a reevaluation of its worldwide posture, the military reassigned thousands elsewhere.

In 2004, the Army&#8217;s 2nd Infantry Division became the first to deploy from bases along the Korean demilitarized zone to Iraq. Its 2nd Brigade lost 68 soldiers among the 3,900 sent in the yearlong deployment before moving to its new home, Fort Carson, Colo.

Other, smaller deployments from South Korea have followed and today there are about 29,500 U.S. troops stationed there.

Airmen on Pacific bases also are rotated to the Middle East and Afghanistan on tours under the service&#8217;s Air Expeditionary Force program.

Training for Marines on Okinawa is nearly constant as they participate in 72 exercises per year, ranging from platoon-size TDYs to major exercises such as Balikatan in the Philippines, where terrorists are active. And every year there is a steady stream of individual Marines and small units deploying to the Middle East.

In recent years, the Navy&#8217;s Seventh Fleet has been girding itself to deal with terrorist threats in its Western Pacific area of operations that have emerged since Sept. 11, 2001.

Vice Adm. Jonathan Greenert, who leaves command of the fleet this week, said the 20,000 sailors and Marines under his watch now are prepared to handle situations in southeast Asia such as maritime interdiction and intercepting smugglers, terrorists and pirates by using small, quick boats.

The Navy also improved its missile search and tracking systems at sea, as the Air Force is doing in Japan, to counter increased North Korean weapons capabilities.

The tempo on Guam likewise has been increased. The Air Force has added a constant flow of rotational bomber squadrons, and the island&#8217;s airmen do more training with other military branches, said Andersen Air Force Base spokeswoman Maj. Richelle Dowdell.

There and at other bases throughout the Pacific, heightened security and terrorism awareness are evident &#8212; from messages on American Forces Network about how to avoid becoming a terrorist target to passenger and baggage checks on military flights as rigorous as those at commercial airports.

People are much more aware that what appears safe may not be, Dowdell said.

&#8220;While we don&#8217;t comment on operational security measures, it is safe to say that all our U.S. military personnel in Japan and their families are much more vigilant and sensitive to potential terrorist activity,&#8221; said USFJ deputy provost marshal Joe Tenis.

Off-base taxis no longer are allowed inside the gates at Yokota Air Base. They also were banned at Marine Corps Air Station Iwakuni temporarily, but officials there now allow certain companies base access.

Force-protection and security upgrades to gates and key buildings &#8212; including the additions of tire-shredders and pop-up steel barriers &#8212; have taken place at most U.S. installations in Japan in recent years.

U.S. Naval Forces Marianas officials on Guam said most of its changes after the attacks came in the form of random anti-terrorism measures, gate security devices, aggressive harbor patrol schedules and the deployment of working dogs for inspections at base gates.

Before the terrorist attacks, security on military bases on Okinawa could be described as relatively laid-back. On most bases, cars were waved through the gates so long as they had a valid base sticker on the windshield. On Marine bases, the Japanese gate guards were unarmed.

All that changed the day after the attacks. For weeks, security was so intense that traffic remained backed up at the heavily manned &#8212; and gunned &#8212; gates. Military foot patrols were increased inside the perimeters, and the Japanese government provided special units to patrol the outside the fence lines.

Today, the special Japanese riot and terror units are gone. When driving onto a base, except during special exercises, only drivers are required to show their ID cards.

At Kadena Air Base on Okinawa, there now is random scanning of the cards to check against identity theft, said 18th Wing spokesman Johnathan Monroe.

And the Japanese gate guards on Okinawa as well as at mainland Japan bases now carry sidearms while on duty.

In South Korea, the U.S. military has poured millions into upgrading base access, including pop-up barriers, new guard booths and traffic arms.

But another reminder affects every servicemember in South Korea every single day. Shortly after the Sept. 11 terrorist attacks, U.S. Forces Korea instituted a curfew, citing force-protection concerns. While curfew times have varied depending on real-world events, such as the beginning of the ground war in Iraq in 2003, it&#8217;s never fully been lifted.