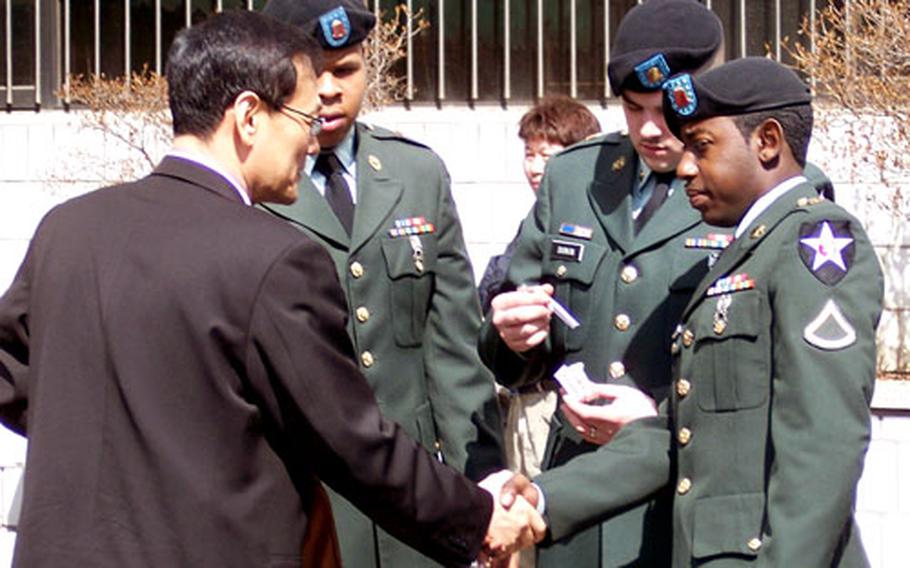 However, Army judge advocate Capt. Peter Juetten, who was observing the trial, told the court that &#8220;poor translation&#8221; made it difficult for observers to determine whether one soldier admitted planning the attack in advance. Three of the soldiers said they did not plan it in advance and one declined to comment.

Pvt. Kidrem Cortez Porter, 21, exercising his right under South Korean law, declined to answer when asked whether the attack was planned.

Porter admitted to choking the taxi driver and smashing his head with a beer bottle while others stole the driver&#8217;s money. Porter is serving an 18-month sentence in a South Korean prison on a prior robbery conviction. He had been confined to Camp Red Cloud but Army officials say he left the base without authorization the night of the robbery.

When the soldiers first entered the cab, Reid asked if the driver had change for $100, Westbrook said. When the driver said he did, they asked him to take them to Camp Stanley.

Westbrook said Durkin asked the driver to pull over so he could use a bathroom, which Durkin denied. When the driver stopped, Porter allegedly beat the driver. Westbrook said he and Reid then took some of the $180 prosecutors say was stolen.

Westbrook said he could not recall who stuffed the driver in the taxi&#8217;s trunk.

Reid recalled differently, saying, &#8220;Westbrook and Porter put the driver in the trunk.&#8221;

Westbrook later testified he&#8217;d opened the trunk so he could remove his bag and escape from the scene, and that he regretted his actions.

McCall admitted to driving the taxi while its driver was stuck in the trunk. Once the soldiers fled, the driver escaped and notified police, according to prosecutors.

Shortly before the trial adjourned, Juetten stood and asked the three-judge panel to consider that poor translations may have led the defendants to answer the same questions differently when asked twice.

The judges scheduled the trial&#8217;s next phase for April 14, at which time they likely will announce the verdict and any sentencing.