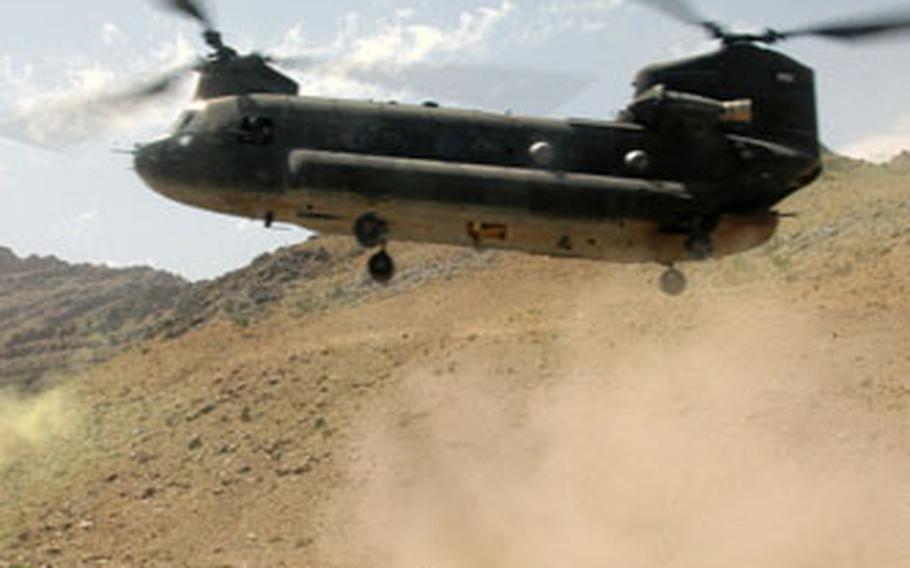 Soldiers from Company C, 2nd Battalion (Airborne), 503rd Infantry Regiment, turn and kneel away from a CH-47 Chinook helicopter as it comes in for a landing in a riverbed northwest of Qalat, Afghanistan, in July. A similar Chinook helicopter crashed southwest of Deh Chopan on Sunday, killing all five crewmembers. (Jason Chudy / S&S)

BAGRAM, Afghanistan &#8212; All five crewmembers aboard a U.S. military transport helicopter were killed Sunday morning when their CH-47 Chinook crashed in southern Afghanistan.

Lt. Col. Jerry O&#8217;Hara, a spokesman for Combined Joint Task Force-76, said no passengers were on board and that the names of the victims and the units they belonged to would not be released until their relatives were notified.

The crash occurred about 8 a.m. local time, southwest of Deh Chopan. O&#8217;Hara described the terrain as &#8220;mountainous.&#8221; U.S. troops had secured the crash scene by midday Sunday, officials said, describing the area as remote and away from any population centers.

&#8220;Our thoughts and prayers are with the families and loved ones of the service members lost today,&#8221; Maj. Gen. Jason Kamiya, CJTF-76 commander, said in a Sunday news release.

&#8220;I would like them to know that our service members gave their lives in a noble cause &#8212; to defend freedom and to assist the Government of Afghanistan in providing for a safe and prosperous future for the Afghan people.&#8221;

An Afghan provincial official told The Associated Press that no fighting had been going on in the vicinity of the crash Sunday. Gulab Shah, a spokesman for the Zabul provincial governor, also told the news agency that the weather at the time of the crash was &#8220;fine.&#8221;

A reputed Taliban spokesman phoned several news agencies Sunday with claims that militia members had shot down the helicopter. The man did not offer any proof.

It is at least the fourth Chinook crash in Afghanistan in the past year. The ubiquitous, twin-rotor Chinook is heavily relied upon for ferrying troops and supplies through the country.

Currently, the bulk of the aircraft in Afghanistan are assigned to the Germany-based 11th Aviation Regiment and 12th Aviation Brigade, as well as National Guard units from Oregon and Nevada.

In the previous incidents: