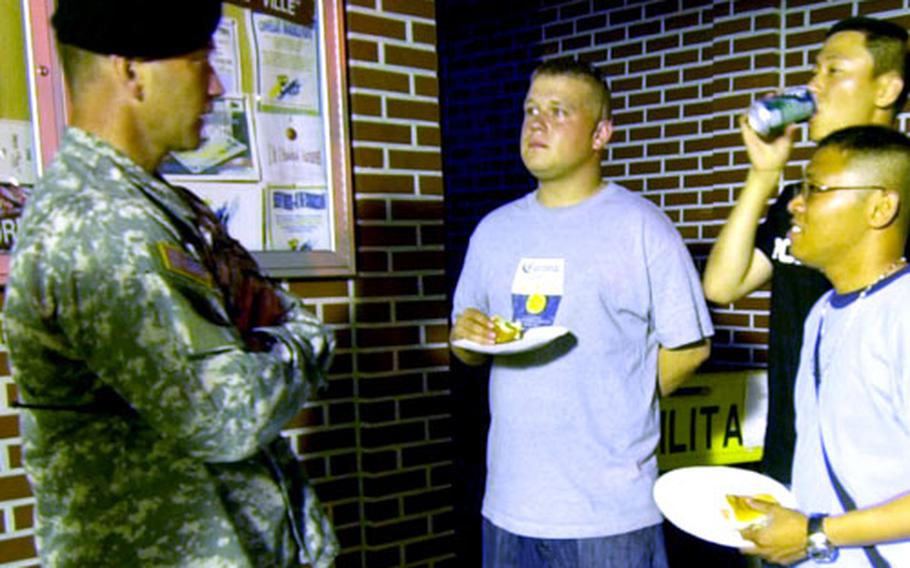 ANJUNG-RI, South Korea &#8212; Most of the bars in the entertainment district outside Camp Humphreys are plastered with faded, weather-beaten signs warning U.S. Forces Korea personnel that they must be at least 21 years old to drink alcohol.

That&#8217;s nothing new &#8212; the signs have been there since shortly after USFK raised the drinking age for its personnel in 2004.

But as groups of soldiers wandered out the gates and into the glowing neon district this week, they&#8217;ve discovered new signs posted on five of the clubs.

Effective immediately, the signs read, customers must be 21 to even make it in the door. Previously, all the bars welcomed underage customers as long as they weren&#8217;t drinking alcohol.

During an interview last week on the camp, Taliento said keeping the underage troops out of bars would be an overall &#8220;positive&#8221; change, a way to curb underage drinking.

But the merchants must address potential drawbacks to that plan, he acknowledged.

A policy soldiers perceive as &#8220;restrictive&#8221; could chase them from Anjung-ri to other areas, he said. The party district outside nearby Osan Air Base is only a $20 taxi ride away from Camp Humphreys.

Yi Hun-hui, president of the Korea Special Tourist Association, said this week that he decided to bar underage troops from his Enterprise Club. The owners of two other clubs &#8212; Maxim and Dixie Bell &#8212; also decided to ban anyone under 21.

Yi said he&#8217;s conducting a sort of experiment to see what happens with a 21-and-older policy at the Enterprise Club. And because other clubs in the area are still allowing underage troops inside, he doesn&#8217;t think too many people will leave the area looking for someplace better to party.

He also said several other association members are looking at a plan for a place that would sell non-alcoholic beverages but still give the troops a chance to dance and enjoy a club atmosphere.

Taliento said the recent flare-up with the merchants wasn&#8217;t the first &#8212; and probably won&#8217;t be the last. When he arrived in 2004, he said, the military was taking a serious look at what was happening in the entertainment districts outside its gates, and he was given direction to tackle the problems.

&#8220;I took that guidance and began to engage with the local community,&#8221; he said. The work included on- and off-base office visits and training and education sessions. The military created signs the bars could hang to warn troops of the drinking age, hand stamps so busy bartenders could keep track of which soldiers are old enough to drink, and calendars that show the day, month and year someone would have to have been born to be of legal age.

Taliento said the military made those efforts to &#8220;help them help us manage our policy.&#8221;

There have been rough patches and clubs have been made off limits, he said.

But when addressing the issue, he added, it&#8217;s important to look at some of the successes.

&#8220;There are bars that are doing the right things,&#8221; he said. And he&#8217;s confident the recently signed agreement will help mature the relationship.

In the first monthly meeting of a new advisory committee that merchants will sit in on &#8212; another part of the June 30 agreement between Taliento and the associations &#8212; a topic of discussion will be &#8220;collective actions&#8221; the group will take when a bar serves alcohol to underage soldiers, Taliento said. He said he plans to have that first meeting &#8220;very soon.&#8221;

He also said he will have a Commanders&#8217; Engagement Program in place by Aug. 1 that will clear the way for the return of late-night base shuttle buses. He ended the late-night service last year due to discipline problems, including fights on the buses.

Merchants had complained that even though troops can stay out to 1 a.m. on weekends, they felt like they had to be back by midnight so they could catch the last bus back to their living areas.

Taliento said it&#8217;ll be important to continue talking with city officials and merchants to find balance and &#8220;a way ahead that serves both of our interests.&#8221;

Agreement covers several pointsThe move to keep troops younger than 21 &#8212; U.S. Forces Korea&#8217;s legal drinking age &#8212; out of some of Anjung-ri bars follows a recent row between the merchants and the U.S. military&#8217;s Area III leadership.

On June 30, five days after the protests began, Taliento signed a memorandum of agreement with the K-6 Merchants Association and the Korea Special Tourist Association, Pyeongtaek Chapter.

In the agreement, the merchants agreed to:

Check all patrons&#8217; identification cards.Join in frequent inspections for the enforcement of underage drinking.Participate as observers with city officials during Armed Forces Disciplinary Control Board meetings.Participate in a joint advisory committee with city and base officials to discuss issues and resolve problems related to underage drinking, prostitution and human trafficking and other unacceptable behavior.Remove derogatory banners and cancel demonstrations.In return, Taliento agreed to:Lift the off-limits restrictions on Duffy&#8217;s and Bay Watch clubs as long as they banned U.S. troops under the age of 21.Not to hold club owners responsible if adult patrons purchased alcohol for underage troops.Work to extend the on- base shuttle bus service before Aug. 1.&#8212; T.D. Flack

Last Friday he manned a gate, reminding soldiers they need to take care of each other and act as ambassadors while off base. And, he stressed repeatedly, soldiers cannot drink alcohol unless they&#8217;re at least 21 years old.

One soldier joked that the colonel shouldn&#8217;t work so hard.

That the men were laughing and joking while touring the bars was slightly surreal. Less than a month ago, Yi and Kim called for Taliento&#8217;s resignation after he had placed two bars off-limits. Hundreds of bar workers gathered outside the camp to protest and the bars closed their doors to all U.S. troops for about a week.

When they met and signed an agreement on June 30, Kim told Stripes that the U.S. military admitted fault in conducting undercover investigations at the bars. Kim later backtracked, telling Stripes that he had misunderstood what Taliento said at the meeting.

As Taliento toured the bars, owners were quick to say they were following guidelines on keeping alcohol away from underage troops. Nearly every club had a sign posted on doors or in windows.