The Aviano fitness center, which opens Friday, is bordered on three sides by the golf course, softball fields and track. The other side features a view of the sun-coated mountains beyond the headquarters facility. (Kent Harris / S&S)

The Aviano fitness center, which opens Friday, is bordered on three sides by the golf course, softball fields and track. The other side features a view of the sun-coated mountains beyond the headquarters facility. (Kent Harris / S&S) 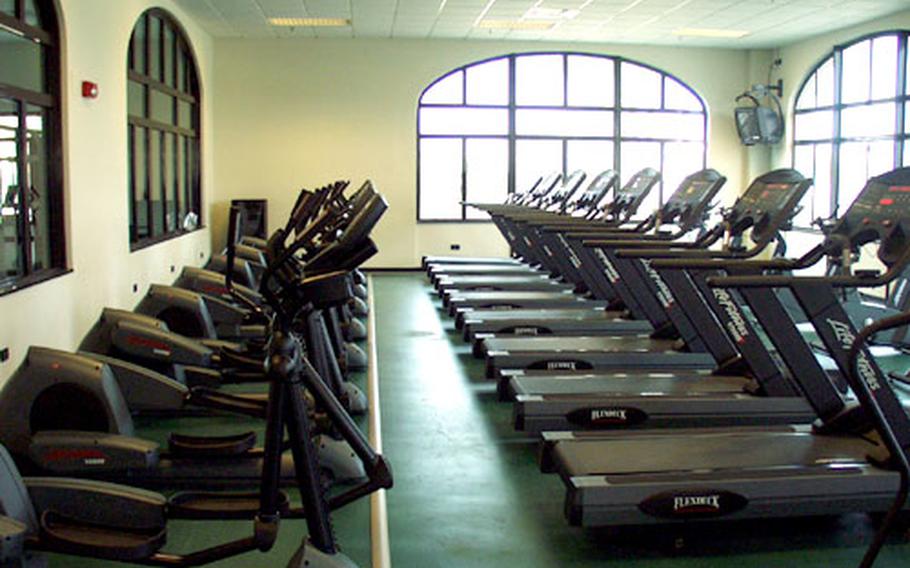 These two rows of equipment in the new fitness center at Aviano Air Base haven&#39;t been used before. That&#39;ll change starting Friday, when the $4.2 million center debuts near the flight line. (Kent Harris / S&S) 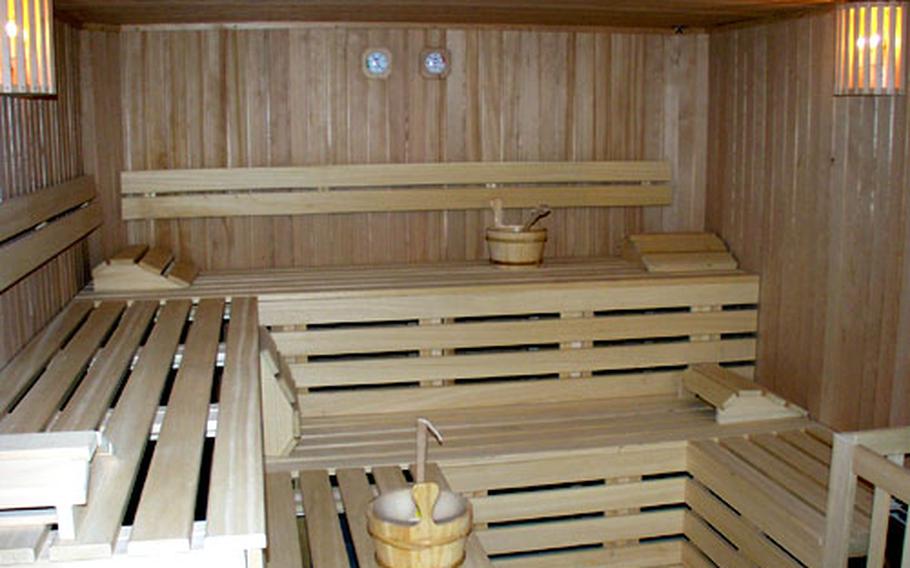 A sauna in the new fitness center complex at Aviano. (Kent Harris / S&S) The gymnasium in the new fitness center at Aviano Air Base will be the largest of the six gyms currently open or under construction around the city. It&#39;s got seating for about 200 people, and can be adjusted to have two full-court games on at the same time. (Kent Harris / S&S)

AVIANO AIR BASE, Italy &#8212; Starting Friday, this Italian air base will have as many fitness centers as it has Burger King franchises.

Of course, Aviano is better known for fast planes than fast food. But pretty soon the community may become known for its athletic facilities. By the time that the Aviano 2000 construction project is completed around 2007, the base will boast five gymnasiums. Not bad for an active-duty population of about 4,200 and a total American population about twice that.

Five hundred lockers. Two saunas. Two racquetball courts. A large room designed specifically for aerobic classes. And rows and rows of the latest exercise equipment &#8212; all of it waiting to be used for the first time.

Hayes said he expects that participation will level out after that, but fitness center officials are counting on about 500 visitors a day. That&#8217;s in addition to a smaller number of people expected to keep on going to the fitness center across town on Area 2. The present fitness center there will eventually consolidate inside the gym on Area 2, freeing up more office space.

But many of the people who currently live in dorms on Area 2 will be moving over to new dormitories on the flight line around the end of summer.

That will mean more people will be closer to the new fitness center. When it opens, it will already have a substantial population within a block&#8217;s walking distance, though. The 31st Fighter Wing&#8217;s headquarters complex is right across a street.

The rest of the surrounding area is all devoted to athletics. A nine-hole golf course (with new club house), all-weather track and softball fields surround the fitness center on the three sides not facing the headquarters building.

Hayes said the exercise equipment was set up so that those not wishing to watch the handful of television sets in the room can look out the window toward the snow-covered mountains a short distance away from the base.

The fitness center is the latest addition to the Aviano 2000 program, a $550 million project with American, Italian and NATO funding that is transforming the areas that comprise the base.