Fisher House offers a home away from home 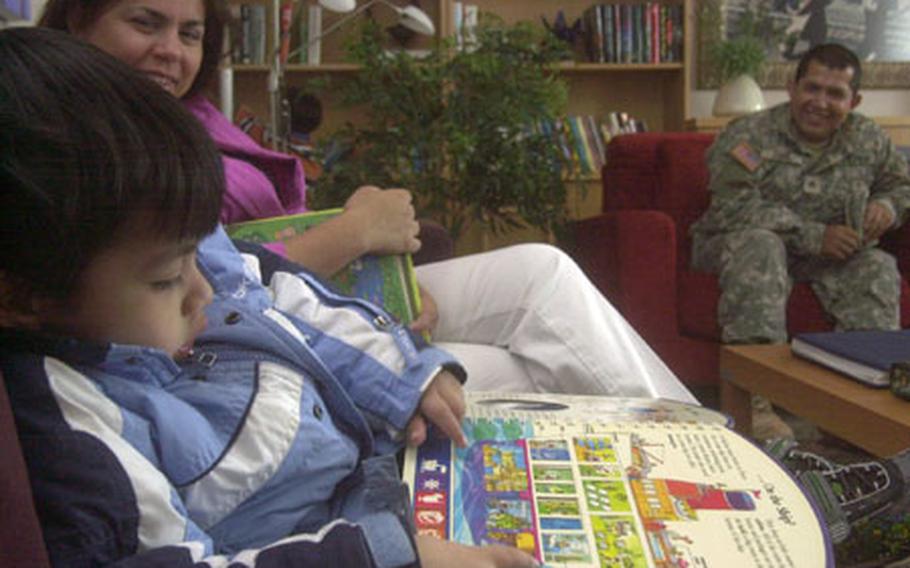 Three-year-old Fredy Zoque Jr. scans a book at one of two Fisher Houses on Landstuhl Regional Medical Center while his mother, Unice, and father look on. (Steve Mraz / S&S)

Three-year-old Fredy Zoque Jr. scans a book at one of two Fisher Houses on Landstuhl Regional Medical Center while his mother, Unice, and father look on. (Steve Mraz / S&S) Sgt. Fredy Zoque, right, relaxes with his sons and wife at one of two Fisher Houses at Landstuhl Regional Medical Center. Zoque broke his left ankle in Ramadi, Iraq. The Fisher House offers families a home-like setting and a chance to be close to their loved one receiving medical treatment. Stays at the Fisher House are now free thanks to generous donations. Prior to Oct. 1, 2006, the Fisher House charged $10 per night. (Steve Mraz / S&S)

LANDSTUHL, Germany &#8212; There&#8217;s no place like home, but the Fisher House comes pretty close for families of wounded troops.

While their husbands, wives, sons, daughters, dads or moms receive treatment in nearby Landstuhl Regional Medical Center, family members can stay at one of two Fisher Houses on post within walking distance to the hospital.

Thanks to the generosity of donors, families at any of the 37 Fisher Houses worldwide are no longer charged a nominal nightly fee. The foundation began picking up the fees on Oct. 1, 2006.

The Fisher Houses at Landstuhl, opened in 2001 and 2002, have nineteen rooms with a bath/shower included. The houses &#8212; each with a kitchen, dining room, laundry room, living area and Internet-connected computers &#8212; have been a temporary home for almost 5,000 families.

&#8220;We just wrap our arms around the families, who come under stressful situations and some of the more normal situations that life presents, and give them what they need when they are away from their normal network of support,&#8221; Gregory said.

Two donations of $20,000 each came from folks in Canada and Canadian Forces on the ground. Several Canadian families have stayed at the houses, particularly last year when the country&#8217;s military suffered casualties in Afghanistan.

Last July, the then-Installation Management Agency Europe presented the Landstuhl Fisher Houses with a check for $81,000. The cash was raised during two months of &#8220;designated giving&#8221; IMA-E chaplains organized.

The Zoque family recently spent a few nights at one of the Landstuhl houses and benefited from such generosity.

Sgt. Fredy Zoque, a Bradley fighting vehicle mechanic with the Company B, 1st Battalion, 26th Infantry Regiment out of Schweinfurt, Germany, recently suffered a broken ankle while serving in Ramadi, Iraq. His wife, Unice, and three sons traveled from Schweinfurt to be with their father and husband for the first time in seven months. Unice Zoque used the kitchen to prepare Mexican chicken, Spanish rice and Mexican fruit salad.