‘Fish out of water’ handles air operations for EOD forces 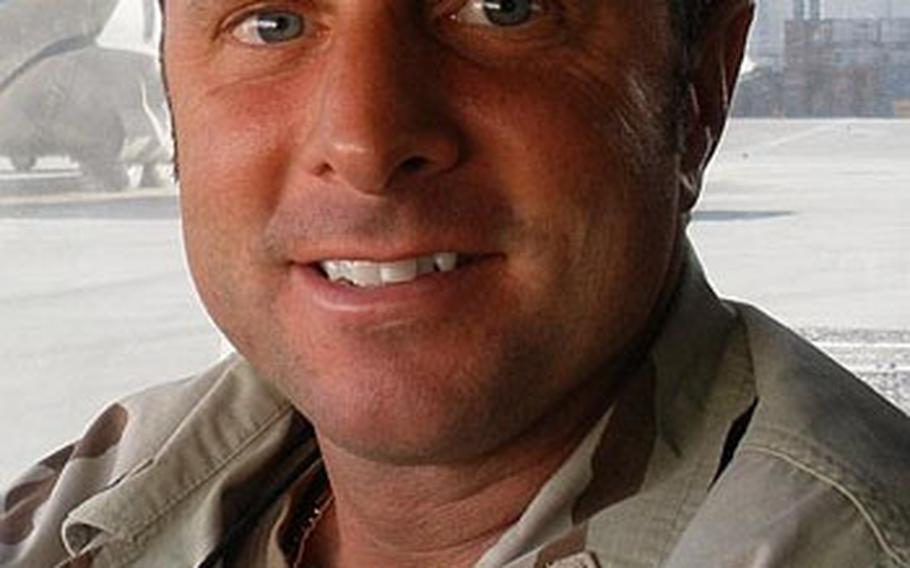 Chief Petty Officer Dave "Tivi" Thivierge feels like a fish out of water in Afghanistan.

The U.S. Navy diver and dolphin trainer is miles from any ocean, overseeing a mission for which he has no prior experience.

There just aren&#8217;t many dolphins in Afghanistan.

Thivierge is one of thousands of sailors who deployed to Afghanistan &#8212; voluntarily or otherwise &#8212; to work with and support Army and Marine Corps ground forces stretched thin by prolonged commitments in foreign lands.

Based at Kandahar Airfield, he is tasked with mastering the complex air operations system for Regional Command&#8211;South of the International Security Assistance Force, ensuring that roughly six dozen explosive ordnance teams and their cargo get to their missions.

He had a steep learning curve, having to not only learn the different ways U.S. services do business, but also how each of the coalition forces operates.

"I&#8217;m in charge of planning, scheduling, manifesting everything that has to get on a plane or helicopter for [explosive ordnance disposal forces]," he said. "Throw in all of this learning how NATO forces do business &#8212; how the Norwegians do it or the Canadians or the Brits, and on top of that how the [U.S.] Air Force, Army and Marines do it."

Was it a challenge?

Back home in Coronado, Calif., Thivierge, 39, is part of Platoon 301 of Explosive Ordnance Unit 3, in charge of the MK-6 program, training Navy dolphins.

While there&#8217;s no call for dolphins in Afghanistan, they have been used in the Iraq war to detect anti-ship mines and underwater booby traps from the port of Umm Qasr.

The Navy has six dolphins that are trained to detect whatever shouldn&#8217;t be near valuable assets such as ships, piers, harbors and buoys. The six are qualified to detect submerged items, from bombs to swimmers.

"Our job is to protect things that other people want to destroy by whatever means," said Thivierge, a 22-year veteran. "The dolphins are trained to locate anything in the water that shouldn&#8217;t be in the water."

The team trains two male dolphins, Dinky and Luke, and four females, Coho, Splash, Andrea and Fathom. Within days of getting a mission call, the team can deploy anywhere in the world. They typically conduct five or six missions a year.

But Thivierge now must handle the ebb and flow of a complicated transportation system. He says arranging flights for several nations and their services is a "very intricate" process compounded by ever-changing flight schedules and helicopters that just don&#8217;t show up or take off early.

And a "terminal information tent" he relied on for answers? It was up and running one day and padlocked the next.

Even after nearly eight years of fighting, getting personnel and cargo from point A to point B is not easy. Nothing in Afghanistan is, Thivierge said.

"I really had to learn how to manipulate the systems," he said.