First troops head back to Middle East after R&R 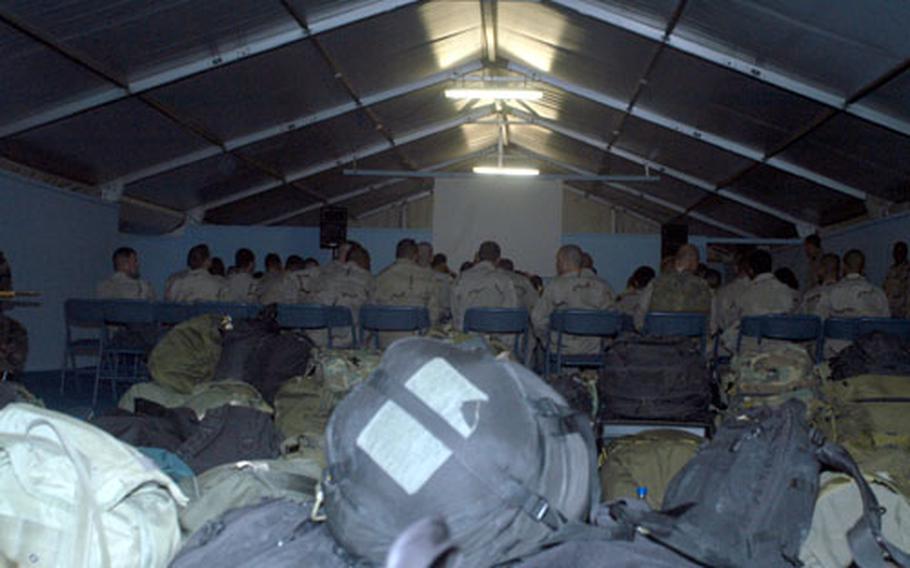 Nearly 80 troops were geared up and ready to go by 6 a.m. Monday after 15 days of rest and recuperation. (Jessica Iñigo / S&S)

Nearly 80 troops were geared up and ready to go by 6 a.m. Monday after 15 days of rest and recuperation. (Jessica Iñigo / S&S) 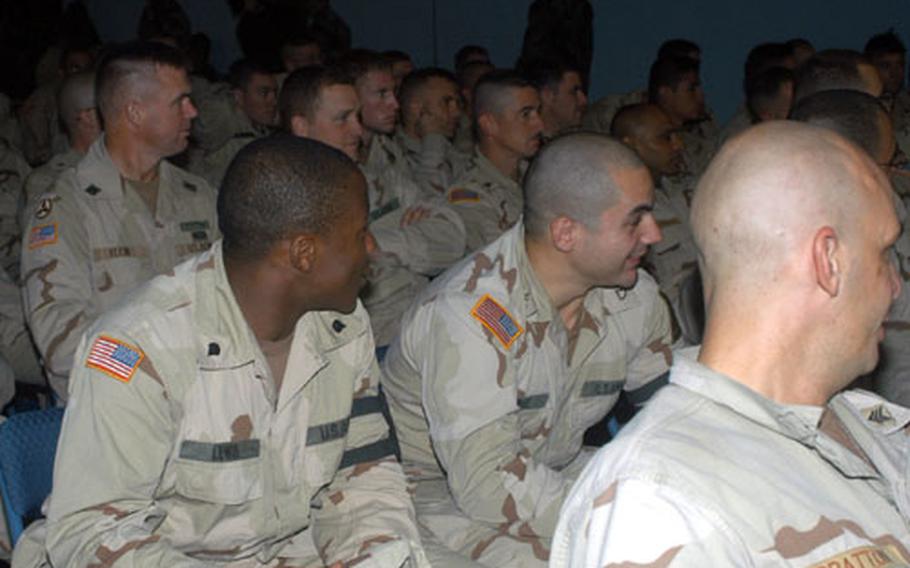 Troops prepare to be briefed on heading back to Iraq. (Jessica Iñigo / S&S) 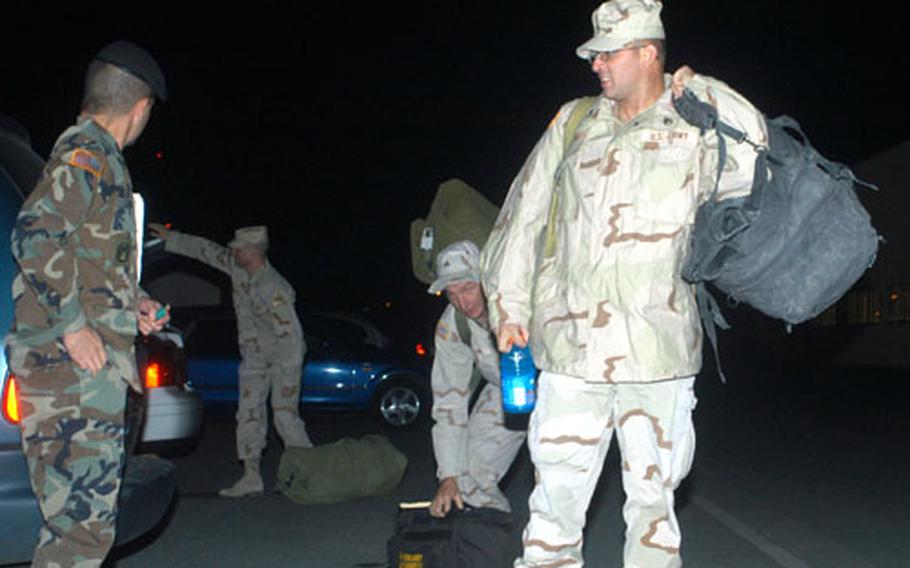 Staff Sgt. Rommel Vargas, 1/37 Armed Battalion out of Friedberg, Germany, leads troops into the waiting area before their flight. All soldiers had to be on Rhein-Main Air Base by 6:20 a.m. for return flights to Kuwait and Iraq. (Jessica Iñigo / S&S)

RHEIN-MAIN AIR BASE, Germany &#8212; Newlyweds were reunited, fathers spent time with their children, and single soldiers were out on the loose.

About 80 troops from the European Command, and another 200 from stateside units, climbed aboard planes headed toward Kuwait and then on to Iraq, after 15 days of rest and recuperation.

Some, such as Staff Sgt. Thomas Merrit, Company A, 1st Battalion, 4th Air Defense Artillery, out of Wackernheim, Germany, had nothing but good times from the second he stepped off the plane.

Others said they never really got the rest part down during their R&R.

&#8220;It was a whirlwind 15 days. I visited my wife&#8217;s family in Germany, flew back to the States to visit mine, and then our grandparents came over. Basically we fit the whole family in. I thought we would be able to relax the last five days, but that didn&#8217;t really happen,&#8221; said Sgt. Timothy Kibbe, 21st CSH, who was saying his final goodbyes to his newlywed wife, Christina. They were married on Valentine&#8217;s Day right before deployment.

With tears in her eyes, she asked in German if he could please speak for her.

&#8220;She&#8217;s real sad,&#8221; Kibbe said hugging her outside of their car before he entered a tent near the passenger terminal to be briefed on his return.

Others said their days off allowed for time to pretend life was back to normal again.

Two weeks off gave Spc. Eric Pierce, 21, of Emben, Maine, a chance to grow a goatee, drive his new BMW, and most of all, spend every waking moment with his wife, Edna.

Pierce, a communication specialist with V Corps in Baghdad, was working the late shift Sept. 23, when his bosses told him to take the next two weeks off.

He had six hours to collect his things, get to Baghdad International Airport and catch a flight to Kuwait. After a night at Camp Wolf, the Army base adjacent to Kuwait Airport, Pierce flew to Frankfurt.

Meanwhile in Heidelberg, Edna Pierce, an Army specialist who works for V Corps&#8217; rear detachment, anxiously awaited her husband&#8217;s return. The couple had been married June 10, 2002, and missed their first anniversary.

Eric Pierce left for Kuwait on Jan. 31, and moved north to Baghdad with V Corps in mid-April. For the first time in nine months, Edna Pierce would have someone to talk to except their cat Garfield, she said.

On the first day the couple faced the uneasy feelings of getting reacquainted, they said, but that wore off quickly. They remembered what it was like to share the computer, the television and their bed.

There were joyous calls home to his family in Maine and her folks in El Paso, Texas. Then the couple headed out to the Coyote Caf&#233; in Heidelberg for the long-awaited steak that he and fellow troops in Iraq dream about when washing down their packaged rations with bleach-filtered water.

The Pierces then fell back into everyday life for a short while. They watched movies together and took short trips around Germany. They even quarreled a bit, over laundry and the dishes. But they kept the fights short.

By this weekend, they realized their time together was growing short, so they squeezed in a final quick trip to Switzerland.

Now the couple is thousands of miles apart and Edna Pierce will return to Heidelberg&#39;s Patton Barracks to issue troops supplies. But they will send each other their love in e-mails, letters, and packages. Hopefully, Eric Pierce will return again by February, he said.

All the troops waiting in the big briefing tent near the passenger terminal agreed.