First-time mothers doing it all together at Landstuhl hospital 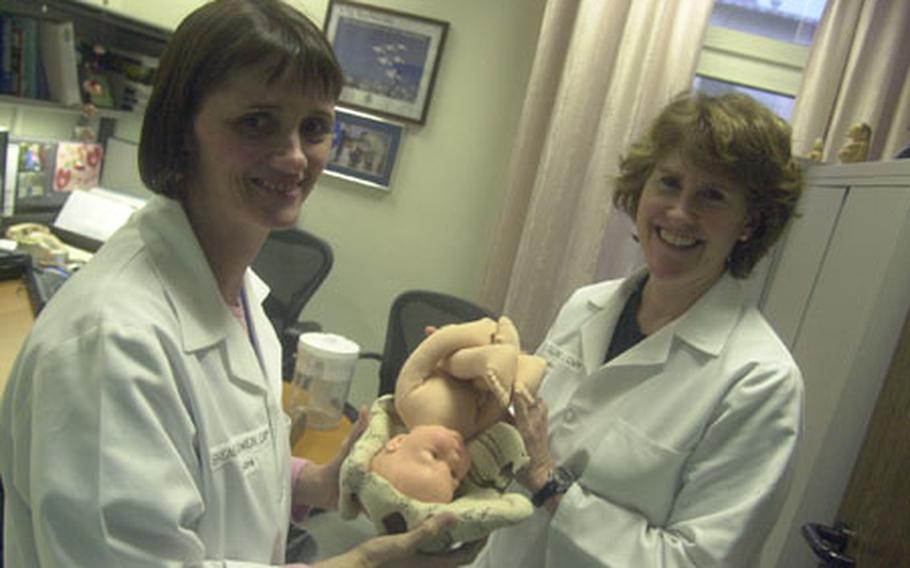 LANDSTUHL, Germany &#8212; Being pregnant for the first time while living in Europe, with your husband deployed, can be a daunting situation.

Instead of going to individual prenatal appointments throughout their pregnancy, women can participate in group sessions as part of the &#8220;Centering Pregnancy&#8221; program.

At Landstuhl, the program will begin in March for women due to give birth in September. Women at low risk for pregnancy problems will have the option to enroll in the program during their initial visit. With about 70 new pregnant patients a month, Landstuhl could have plenty of takers.

&#8220;We have a special population &#8212; that includes younger women many times far away from their families and support systems, often with spouses deployed &#8212; who would benefit from the extra emotional support that a group can provide,&#8221; said Air Force Lt. Col. Mary Claire Wahl, a certified nurse midwife at Landstuhl.

The obstetrics and gynecology clinic will continue to provide the traditional prenatal care for high-risk patients or anyone who does not want to participate in the new program.

The &#8220;Centering Pregnancy&#8221; program was developed in the United States 13 years ago and used in civilian hospitals. Two military hospitals in the States have adopted the program, and Landstuhl is the first overseas military hospital to follow suit.

Under the program, groups of eight to 12 women will have their prenatal appointments together for the duration of their pregnancies. Each of nine or 10 group sessions will last roughly 90 minutes and be led by a certified nurse midwife.

In addition to the emotional support, the program offers proven health benefits. Group prenatal care results in higher birth weights, especially for infants delivered preterm, according to a 2003 study published in the periodical Obstetrics & Gynecology.

&#8220;Group prenatal care provides a structural innovation, permitting more time for provider-patient interaction and therefore the opportunity to address clinical as well as psychological, social and behavioral factors to promote healthy pregnancy,&#8221; according to the study&#8217;s conclusions.