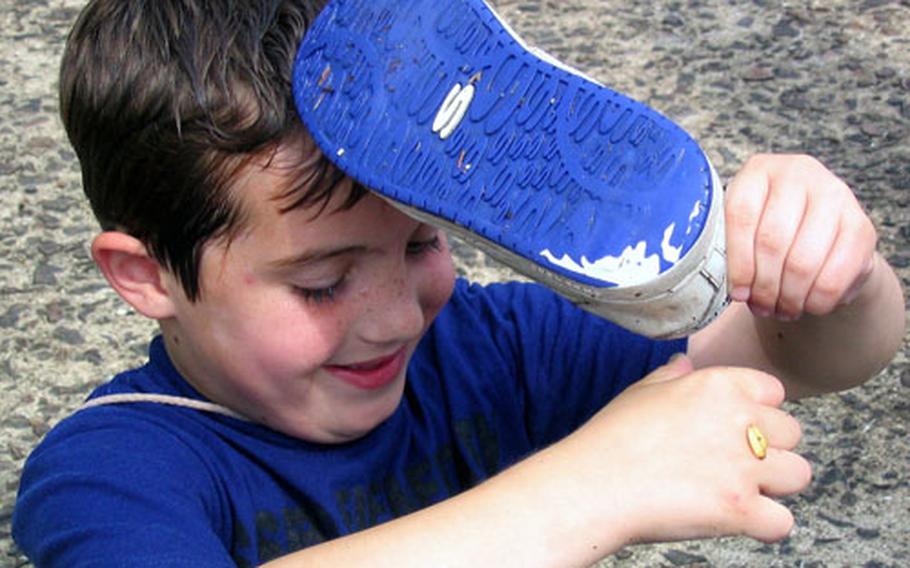 Thomas McGrath, a first grade student at Sasebo Elementary School, had so much fun playing various water games with classmates that he actually had to remove his shoes and wring them out during the Sasebo Naval Base school’s 2004 Field Day on Wednesday. (Greg Tyler / S&S)

Thomas McGrath, a first grade student at Sasebo Elementary School, had so much fun playing various water games with classmates that he actually had to remove his shoes and wring them out during the Sasebo Naval Base school’s 2004 Field Day on Wednesday. (Greg Tyler / S&S) 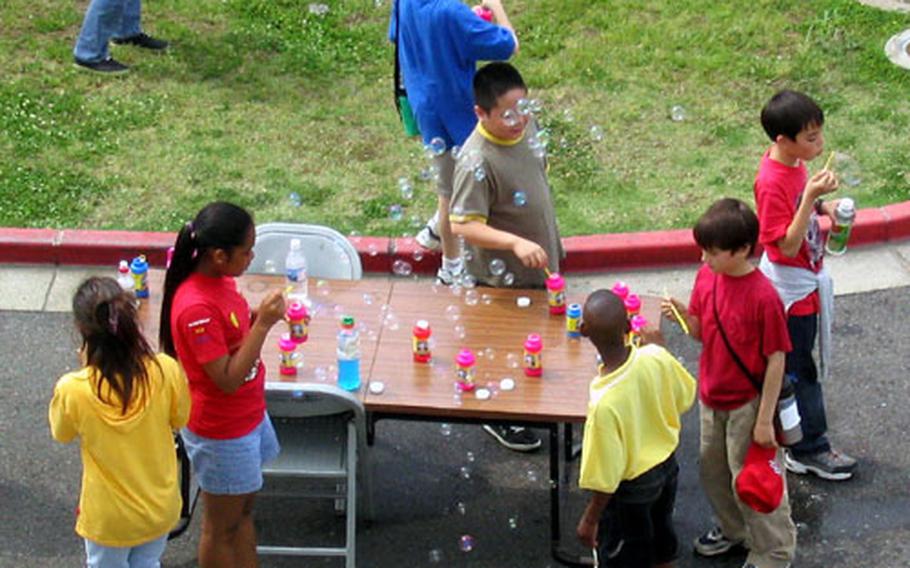 Sasebo Elementary School pupils gather around a makeshift bubble station as their floating creations float through the air Wednesday during the 2004 Field Day at the Sasebo Naval Base school. (Greg Tyler / S&S) Sasebo Elementary School pupils were spread throughout the physical education and recreation facilities on Wednesday during the 2004 Field Day at the Sasebo Naval Base school. (Greg Tyler / S&S)

SASEBO NAVAL BASE, Japan &#8212; Almost everything done this year by pupils, teachers and staff at Sasebo Elementary School is a &#8220;first,&#8221; including Field Day 2004, held at the school&#8217;s outdoor recreation field Wednesday under cloudless, deep-blue skies.

In a sense, everything&#8217;s a first-time experience for the school because it was created last fall when the Ernest J. King Unit School divided into E.J. King High School and Sasebo Elementary School.

Teachers said the school&#8217;s first Field Day afforded the 300 kindergarten through sixth-grade pupils an opportunity to burn off some of the energy &#8212; and squirminess &#8212; that comes from knowing summer break is less than a month away.

Between blowing huge bubbles that shimmered with every color in a rainbow, sixth-grader Kimberley Manalo said she learned a lot this year in Christopher Racek&#8217;s class and enjoyed it &#8212; well, mostly.

Spread across the recreation areas in groups organized according to grade levels, the pupils took part in a variety of relay races, obstacle contests, games such as Bucket Brigade that featured water-related challenges, and the bubble blowing at which Kimberley excelled.

&#8220;This is good clean fun at the end of the school year. And in all these games and activities, they actually use most of the skills I&#8217;ve worked on with them this year,&#8221; said physical education instructor Chris Rheuble, the Field Day coordinator. Every 30 minutes or so, Rheuble set off bullhorn-boosted signals that indicated it was time to rotate and try a different activity.

&#8220;Back in the United States, these type of activities are fairly common,&#8221; she said. &#8220;But we have kids here who have never been involved in an outing like this, just to have fun with their friends and classmates, and maybe even enhance some of their budding social skills.

&#8220;We are an American school, even though we are overseas. So these kids should have the same opportunities to experience some of our culture, just like youngsters back in the U.S. There&#8217;s lots of common ground today. It&#8217;s good to be outside and there&#8217;s actually a lot of learning going on here too,&#8221; said Rheuble.

Taking a breather from getting her kindergarten pupils ready for the Bucket Brigade competition, knowing they all almost certainly would wind up waterlogged, teacher Amy Sheppard summed up the benefits of creating the separate schools this past fall from the former unit school.

&#8220;Things have really been very good all this year. Not that things were bad before, but it&#8217;s nice to have a focus on the elementary school, with teacher, principal and staff devoted solely to the elementary grade levels,&#8221; Sheppard explained.