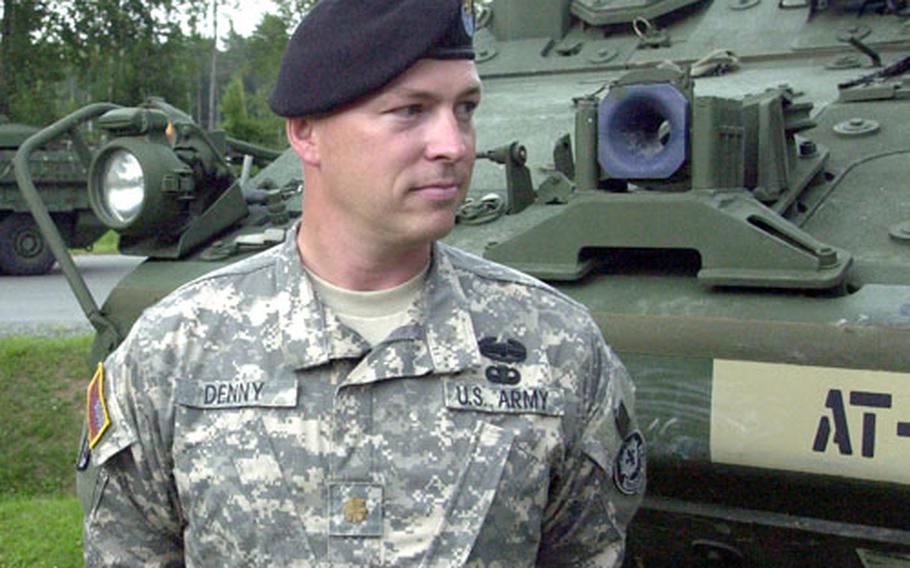 They are Stryker armored personnel carriers, the first of 300 such vehicles that will be delivered to the newly arrived 2nd Cavalry (Stryker) Regiment on three trains over the next week.

The nicks and scratches on some of the Strykers are reminders that the eight-wheeled vehicles saw combat when 2nd Cav &#8212; then of the 1st Brigade, 25th Infantry Division &#8212; deployed to Iraq from October 2004 to October 2005.

The Strykers arrived Monday in Germany after a three-week, 9,500-mile journey by sea from 2nd Cav&#8217;s old base at Fort Lewis, Wash. The soldiers who unloaded the vehicles at the Vilseck greeted them like old friends before driving them to motor pools for inspections.

The unit&#8217;s executive officer, Maj. Bryan Denny, 39, of Oxford, N.C., said the Stryker he served in while in Iraq did not arrive Friday but that he is looking forward to seeing it again.

&#8220;My Stryker was called Headquarters 33. We don&#8217;t give them names like the tank battalions do, but I love that thing and I give her a pat every time I see her,&#8221; he said as he watched other vehicles drive off the train in heavy rain.

Denny said he survived three roadside bomb hits to his Stryker in Iraq.

&#8220;Strykers are very survivable against those things. You will blow tires off but you can still roll back to base. If you are in a tank and lose a track, you are doing maintenance there on the spot,&#8221; he added.

&#8220;This one is an ATGM (Anti Tank Guided Missile) variant,&#8221; explained Denny, pointing out a large missile launcher mounted on top of the Stryker.

Strykers have many advantages over tanks in Europe, he said.

&#8220;A tank can&#8217;t go on an aircraft and fly to one of our eastern European allies. A Stryker can. Tanks crush the road systems in Bosnia and Kosovo. Strykers don&#8217;t. And when a tank gets into a dispute in a town and soldiers get out and respond, a tank only has four crewmen. A Stryker has nine infantrymen or four scouts who can dismount,&#8221; Denny said.

Another 2nd Cav soldier at the railhead &#8212; Spc. Mathew Larson, 21, of Tampa, Fla. &#8212; said he was an ATGM gunner and could shoot targets up to 10,000 feet away. Larson said the most exciting thing he had done in a Stryker was tow a vehicle under fire after a bomb blew out four of its tires in Mosul.

Another soldier on hand for the Strykers&#8217; arrival, Cpl. Aaron Lopez, 19, of Anchorage, Alaska, said the Stryker had saved his life many times in Iraq.

Denny said 60 Strykers and 30 Humvees were on Friday&#8217;s train. The rest of the Strykers would arrive on trains Saturday and early next week. In all, the trains will deliver more than 1,000 pieces of equipment to 2nd Cav, he said.

Denny said the vehicles would not get a heavy workout in Germany until October, when the whole of 2nd Cav is present. Until then they will be used to maneuver to training areas, he said.