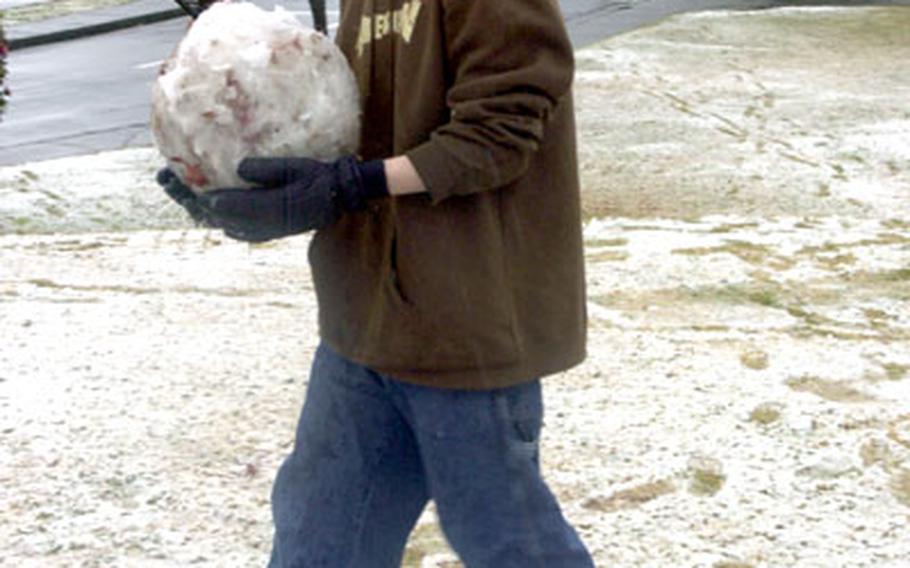 It might not have the same festive ring, but U.S. military installations on Japan&#8217;s Kanto Plain may just get one after the season&#8217;s first snow fell on the area Wednesday.

The heavy, wet flakes coated vehicles and delivered a dusting to grassy patches. Most bases got no measurable accumulation, but Camp Fuji &#8212; the Marine base perched in the shadow of the great mountain &#8212; reported about 4 inches.

Fuji officials sent all civilian workers home at about 1 p.m., he said.

Most Marine personnel finished early and cut their workdays short at around the same time. The Camp Fuji Community Center &#8212; which features the base exchange, Roadhouse Enlisted Club, food court, barbershop and library &#8212; was shut down as well.

The snow ended at about 2:30 p.m. Wednesday, but Nelson said another 4 inches was possible overnight.

Some parts of Yokota received up to an inch of snow before it turned over to rain in the afternoon, according to Senior Master Sgt. Steve Dombek, operations superintendent for the 20th Operational Weather Squadron.

Snow showers fell on Yokota at midday, reducing the sky&#8217;s ceiling to 200-300 feet and visibility to less than a mile, weather officials said.

But there were no base closures or flight cancellations, said 1st Lt. Warren Comer, a 374th Airlift Wing spokesman.

Soldiers at Camp Zama were already on half-day schedules for the holidays, and the snow there had no impact on operations, said Lt. Col. John Amberg, a U.S. Army Japan spokesman.

The Narita Airport bus was running on schedule, along with the postal bus that journeys to Yokota each afternoon.

Neither did officials at Atsugi Naval Air Facility, which saw a trace amount of snow. Flight operations were not interrupted, and personnel completed normal work schedules.

Yokosuka Naval Base, meanwhile, received a rain-snow mix for much of the day, but officials reported no accumulation and conducted routine operations. The American Forces Network did issue warnings about wind exposure.