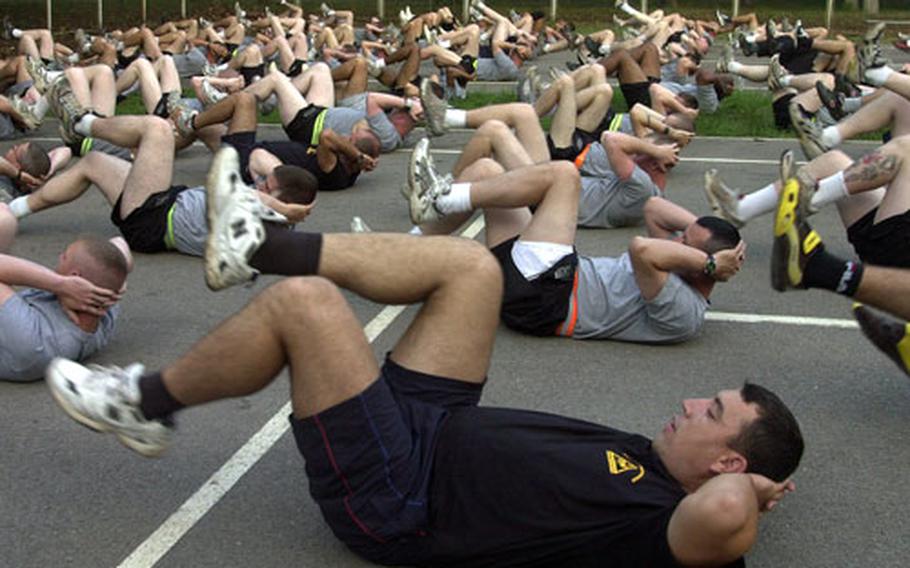 American and Romanian soldiers perform their physical fitness training together at Mihail Kogalniceanu Air Base in Romania last August. A battalion-sized task force — about 700 to 800 soldiers — will deploy this June, marking the first official rotation of U.S. troops under a U.S.-Romania agreement. (Scott Schonauer / S&S)

STUTTGART, Germany &#8212; A staff of commanders and planners will travel to Romania in May to begin to implement the first training of U.S. troops under the new Joint Task Force East. A battalion-sized task force &#8212; about 700 to 800 soldiers &#8212; will deploy in June, marking the first official rotation of U.S. troops under a U.S.-Romania agreement.

A second battalion of U.S. forces would deploy in August to neighboring Bulgaria. Each training mission would last about two months and pair U.S. troops with troops from the host nation.

The training in convoy operations, small-unit patrols, recognition of improvised bombs, and other disciplines is designed to help U.S., Romanian and Bulgarian forces perform better both together and separately, according to Lt. Col. Richard Spiegel, a spokesman with U.S. Army Europe.

Last August, U.S. forces, including about 350 from Baumholder, Germany&#8217;s 1st Battalion, 94th Field Artillery Regiment, participated in a &#8220;proof of principle&#8221; exercise in Romania to test if the nations were ready to begin continuous training events.

About 160 personnel from the Grafenw&#246;hr, Germany-based Joint Multinational Training Command and U.S. Army Europe will lead the exercise with USAREUR&#8217;s Col. Pari Anest as the task force commander.

Soldiers from the Hohenfels, Germany-based 1st Battalion, 4th Infantry Regiment and the New Mexico National Guard are providing the bulk of the Romania rotation.

The Hanau-based 5th Squadron, 7th Air Defense Artillery as well as Utah National Guardsmen would comprise most of the Bulgaria rotation.

The U.S. signed agreements with Romania in December 2005 and Bulgaria in April 2006 to use military bases in the former Soviet bloc nations. Both are relatively recent entrants into NATO and the European Union.

JTF-East is headquartered at Mihail Kogalniceanu Air Base near Constanta, Romania. Most of the Romania-based training would take place there and at a range and training area to the north.

Troops deployed to Bulgaria would train mostly at the Novo Selo Training Area near Sliven, about 150 miles southwest of Constanta.