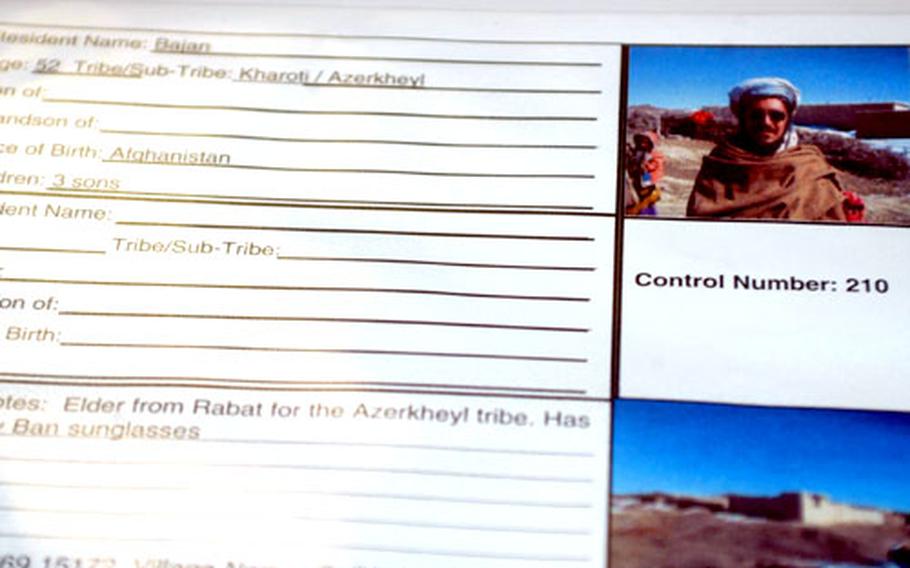 The Battalion Intelligence Team at Orgun-E has soldiers working on a variety of projects they wouldn’t normally be able to get to if they were taking on more traditional tasks, including records that list details about all the residents of the villages where they patrol. (Kent Harris / S&S)

ORGUN-E, Afghanistan &#8212; Gathering intelligence about the enemy is good. Getting the time to analyze that information is even better.

First Rock has expanded the number of troops analyzing intelligence it picks up from various sources around Paktika province, according to Capt. Tim Culpepper, the team leader. Instead of having six or seven soldiers perform that task, the team has 42 analysts.

"We are gathering more information, but the real benefit is our ability to go through it all," Culpepper said. "If I had a normal S2 (intelligence) shop, I wouldn&#8217;t get through 10 percent of what we&#8217;re getting."

The battalion decided to try the concept when its leadership realized it had never seen a lot of the information gathered after yearlong stints in Iraq and Afghanistan. So each company was told to provide three two-person teams to help form the intelligence-gathering-and-analyzing team.

Culpepper said that company leaders were generally reluctant to give up the soldiers for the tasking, but they&#8217;re now seeing the benefits.

Sgt. Robert Hoover said his first sergeant picked him because "I&#8217;m a people person." He said he enjoys doing what he&#8217;s doing now and will probably pursue a career in law enforcement after he retires from the military.

Bill Lynn worked for the FBI for 28 years and before that was a police officer for 10 years. For the past 17 months, he&#8217;s worked in Paktika, attached to the military as part of the Law Enforcement Professionals program. He said he&#8217;s impressed with the approach the battalion has taken. "This is institutional learning," he said, adding that he&#8217;s seen a good deal of growth from the junior enlisted soldiers on the team.

Sgt. James McMillan explains one of the projects he&#8217;s been working on. "The easiest way to explain this is, it&#8217;s like conducting a census," he said of a community breakdown he&#8217;s compiled in a folder.

One folder includes a satellite image of a village (obtained from the Internet), noting where all the dwellings are. Other pages list who lives in each home, what they do for a living and other information that troops might find useful. Lynn refers to it as "human terrain mapping."

First Lt. Andrew Underwood admitted that the battalion would need to compile a warehouse full of folders to do a thorough job in Paktika, about the size of Delaware. "It&#8217;s a start," he said. "We can&#8217;t do the whole thing in the time we&#8217;re here." But future rotations can use the information the battalion is compiling and continue the work if they choose.

"They know the space much more than I do," Culpepper said. "The battalion gains the best ground-level information. And the guys who are up at the battalion level are getting to see the big picture, which they can carry back to the companies."